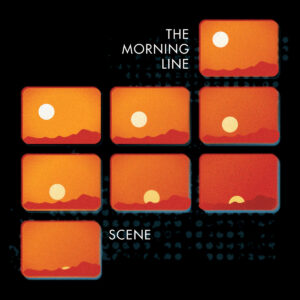 The Morning Line’s 2019 LP, ‘North’, was an absolutely terrific album. Reawakening the sounds of ‘Girlfriend’ era Matthew Sweet, Soul Asylum’s best major label recordings and even a the productions of Sean Slade & Paul Q. Kolderie, it felt like a musical love letter to the 1990s. Retro, yet still somehow fresh, it’s melodic and jangly songs really captured the best of the band’s obvious talents.

Three years on, their first release for Justine Couvault’s Red On Red Records is another musical treat. A seven song collection, ‘Scene’ taps into the “mini album” format – something that seems to have been overlooked since the early 90s – which means there’s far less opportunity for the listener’s attention to wander, but still enough scope for a little variety along the way.

Released as a digital single, ‘Junebugs In April’ provides an especially immediate insight into The Morning Line’s sound when a ringing guitar calls out above a very 60s inspired drum part. More than just a retro love in, of course, the familiar sound is joined by elements that still feel contemporary for the time of recording, including very natural vocal carrying a power pop lilt, a few uplifting, wordless harmonies and a buoyant bass led groove to lend a tougher edge. Although still recognisable as the band who recorded ‘North’ a few years earlier, there’s a tighter feel here, and every one of the musical elements is spot on. It’s all good, but the track is made via an unexpected middle eight where the main melody gives way to a world of warm bass work and softer vocals, utilised in a way that would make Matthew Sweet proud, before a second interlude introduces some brilliant muted guitar sounds. This is a masterclass in how to squeeze the most out of a three minute pop-rock workout without anything sounding messy, cluttered or forced. No matter what happens, the listener is almost immediately pulled back by a very direct chorus hook.

That’s more than can be said for ‘Lines’, a number where a mood and a melody trumps any obvious chorus. The slow-burning approach lends a pleasant sound, and a few plays eventually uncovers a number with some great musicianship, so the lack of big hook can easily be forgiven. By settling into more of the Tom Petty influenced rootsiness that gave ‘North’ it’s true heart, the band leans heavily on a hard strummed acoustic rhythm here – something that’ll be of immediate appeal to most roots rock fans – but leading into the next part of the song, there’s something greater waiting to be discovered. The mood lifts a little thanks to a keyboard part that evokes the sound of a mellotron filling a fairly lax refrain which reminds the listener of the band’s 60s leanings, and more so than before, there’s such a great feel to the arrangement itself, so adopting the narrative over the catchy and direct sort of makes sense. Throughout this track, it’s also very easy to feel as if Stephen Smith’s vocals are the sound of an old, familiar friend.

Even more sedate, ‘Better’ shifts the focus to the piano, presenting set of very spacious chords. The echo on the recording makes the upright sound almost haunting, which is very effective once a mournful harmony vocal makes its first appearance. More than a 90s emo tinged ballad, the quiet melody also shows off some very classy dobro work from resident six stringer Brian Mello, along with a subtle droning sound that could easily have come from a cello. There’s plenty here that respectfully tips the hat to Pete Droge and his vastly overlooked brand of melancholic roots rock, and it’s a style that The Morning Line are able to present almost as perfectly. ‘Back On Earth’, meanwhile, reverts to more tried and tested Soul Asylum meets Kevin Salem jangling, but avoids sounding like a direct rehash of earlier Morning Line tracks by applying a musical canvas that’s somehow broader yet more restrained, if that makes sense. Although the vocals and main melody are great, and the moment where the drums kick in belatedly is potentially greater, the track’s crowning glory comes from Mello adopting a descending 50s twang and having that underscored by a really soft glockenspiel for a slightly cinematic feel. All seven tracks on this release are strong in their own way, but this joins ‘Junebugs’ as one of the real highlights.

Another standout track, ‘Looking Right At You’ shares another solid jangle, but occasionally employs a vocal with an unexpected Elvis Costello inflection. Those deeply into the world of DIY power pop will almost certainly hear an unintentional influence from Edward O’Connell running through the heart of the tune, but when the chorus rolls around with Steve and Brian reaching for some great harmonies, it becomes one of the purest Morning Line tunes this time out. It doesn’t add anything new to the band’s sound; instead it very much relies upon the familiar for its strength, but between a great chorus and a very layered arrangement, it has the potential to become a fan favourite – and rightly so, since it sounds like a strong callback to the ‘North’ sessions.

For those who love The Morning Line’s rockier side, there are a couple of tracks here that are happy to oblige. ‘End of The Night’ stokes up the muted guitar chops and falls head first into something that sounds like a loving tribute to bands like Soul Asylum and Thermadore. Employing a slightly busier vocal, Smith sounds very natural throughout, but when faced with a big chorus hook, he shows a gift for holding an easy presence, whilst Mello fills space with a crying guitar. The equally cool ‘Might Believe’ works some big harmonies and handclaps when propping up a tune that sounds like one of Matthew Sweet’s catchier affairs circa ‘Altered Beast’. As before, the power pop meets roots rock sound is a perfect fit for The Morning Line, with Mello showing how he’s so often the lynchpin in the bands sound, and the rhythm section putting in some hard yards throughout.

‘North’ was always going to be a very hard act to follow. Understandably, ‘Scene’ isn’t quite as good as that record, but it has still has plenty to recommend it. Between ‘Might Believe’ and ‘Back On Earth’ there’s a reawakened sense of 90s influenced coolness, and through ‘End of The Night’ the band convey a huge love of Dan Murphy and Dave Pirner that’s very welcome. For new ears and extant fans alike, this will supply a short but great listen – it’s a well curated slice of entertainment that shows how Morning Line’s sound will never get old.