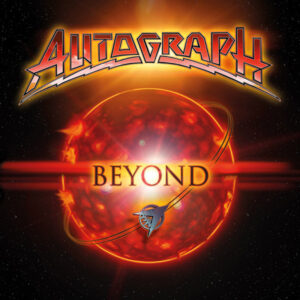 Autograph will be well known to a lot of melodic rock and metal fans for their 80s albums ‘Sign In Please’ and ‘Loud & Clear’. Their single ‘Turn Up The Radio’ was a moderate hit in the US, appearing on MTV and hitting the Billboard Hot 100, which very much helped them have their fifteen minutes of hard rock fame on home turf. Despite not having the same levels of worldwide success as other big haired rockers, the Autograph name has always seemed to hold a fair amount clout, especially retrospectively.

The Autograph of 2022 bears almost no relation to its hit making predecessor. Frontman Steve Plunkett has since departed – away from Autograph, he’s been the vocalist for Sic Vikki and also been producer and songwriter for others – and guitarist Steve Lynch is also AWOL. The only link to the band’s past comes through bassist Randy Rand which, on paper at least, is hardly a solid reason for any kind of Autograph to exist. Steve Plunkett and a pick up band (as was the case on 2003’s ‘Buzz’) would certainly have a more authentic sound, but the band’s ninth album ‘Beyond’ – against all odds – still features a few solid rock tunes that can be enjoyed, if approached on their own terms.

The opening number ‘This Ain’t The Place I Wanna Be’ tears out of the gate with a real intent when drummer Marc Wieland hammers through a massive rhythm befitting of such melodic metal, and guitarist Jimi Bell (on loan from House of Lords) cranks out a really busy lead that sounds as if he’s keen to break into an Eddie Van Halen styled two hand tap. Such is the compressed production sound combined with the energy, it could lead to fatigue fairly quickly but, luckily, a huge melody soon comes through via a twin lead sound and a little more of the Autograph of old soon presents itself. Sliding into the verse, “new” vocalist Simon Daniels (a member of the band for a decade at this point) adopts a slightly deep and gruff sound that seems at odds with the music, but given time to attune, it’s clear that his old school approach is fine, especially once the chorus hits. Faced with a massive hook, he rises admirably, and joined by some well arranged harmonies, Autograph rock like it’s 1989 again. Lyrics about waking up naked next to a fallen angel are best taken lightly, but at least this time such hedonism is frowned upon and not the big haired cause celebre of old… Despite the hook presenting this particular Autograph with best foot forward in many ways, the highlight comes from Bell’s solo. A brilliant flurry of notes that captures a late 80s confidence, it occasionally values speed over melody, but given the massive nature of the track, his enthusiasm shines through. It’s fair to say the album gets off to a good start.

‘Flying High’, a massive hard rock tune celebrating the achievements of a fictitious hard rock band, is easily this album’s highlight. Driven by the kind of riffs that Skid Row took to glory on the more melodic moments of ‘Slave To The Grind’, intercut with the kind of bombast that Autograph made their own back in the day, it immediately grabs the attention. The band whip up a really chunky groove which sounds like it could become all encompassing, but taking a very subtle ringing guitar sound on the pre-chorus into consideration, and having another opportunity to hear Bell completely lose himself in a slightly wah-wahed solo, shows how the band are capable of still delivering the kind of rock that’ll provide enjoyment for a broad spectrum of hard rock fans. Taking on a hard rock stomp, the solid ‘Your Slave Tonight’ is pure cheese from a lyrical standpoint, but through Bell’s slightly heavier tones and another great groove, the tune displays a great sense of confidence. Tonally, there’s a lot at stake that calls back to tunes like Motley Crue’s ‘Primal Scream’, but chorus wise, the bombast definitely owes something to earlier Autograph fare. Once again, there are some good harmonies to be found, along with a really punchy bass from Rand, and some superb, dirty guitar – everything that good hard rock needs. It’s another further suggestion that this line up of Autograph has some musical chops.

Also worth checking out, ‘Run For Your Life’ whips up some decent mid tempo hard rock, before presenting some massive gang vocals on the chorus, reminding everyone of those big haired glory days. After the melody has been established and Daniels has used some of his more melodic abilities to steer the number in the direction of an old Shark Island banger, Bell shreds the hell out of his fretboard, first dropping into something that sounds like Malmsteen circa 1988 and then something a little floatier. Musically, it’s decent, but lyrically, it’s a different story: the song is absolutely loaded with lyrical clichés, and there are at least two chorus hooks lurking within the refrains used – if only they could have used one of them elsewhere, the band might have pulled another decent number together – but the fun that oozes from the performance is clear for all to hear. Although it’s a cliché to suggest such, it sounds so much better with the volume cranked.

Outside of those tracks, though, it would be fair to call most of ‘Beyond’ “patchy”. Even at times where the music is enjoyable, Simon’s vocal style seems at odds with the rest of the band, and there are even times when the band are fine, but the chorus writing falls very short. Given how good ‘Flying High’ showed how good Autograph ’22 can be as a unit, it’s hard to imagine all but the most forgiving fan being a little disappointed with the rest of what’s offered here.

From the outset, ‘Everything’ is a fine melodic rocker where chopping guitars are joined by a solid rhythm. It’s the kind of hard rock tune you’d find on about 200 Frontiers Records releases from the previous decade, but is no less likeable for its familiarity. The verse sets up some solid hard rock that sounds like a cross between old Autograph riffs and the kind of melodic metal from James Durbin’s Cleanbreak, and a key change into the chorus is handled in classic style. Things remain a little flat vocally, however: Simon’s grittier tones never seem to pull the best from a very melodic hook – it’s the kind of thing that would suit a cleaner, higher register so much better – but there’s the bones of a great idea here, and the same can be said for ‘Beautiful Disaster’, a really punchy tune that pushes the rhythm section to the fore, dropping into a pleasing groove. Musically, it’s great, but Simon’s insistence on clinging onto longer notes that he can’t really handle does irreparable damage. During the chorus, he sounds like a work-a-day hard rocker, the kind of guy you’d enjoy watching live in a small venue; during the verses, those nasally focused long notes make him sound like a cut-price Scott Weiland, which doesn’t really suit him, or the song. It’s down to Bell to save face, and predictably, his featured solo really hits the mark. Like Michael Palace, he often seems to understand the value of a strong melody, even when working up a busy lead. It’s fair to say that despite Bell’s best attempts at flying the melodic metal flag, this sounds a little too much like a Velvet Revolver leftover at times, which is probably not what the average Autograph fan would want.

‘Take Me Higher’ is a tough take on an old AOR sound where Bell drops into the tried and tested “Don’t Walk Away” riff, and a massive chorus really celebrates a late 80s mood where multilayered harmonies carry everything in an old fashioned way. With such a solid foundation, it’s a shame that the lead vocals are so flat. If it weren’t clear before, Daniels is able to convey a reasonable amount of volume and projection at all times; what he lacks is a good range. He trucks through this performance with a moody grit that really doesn’t sell the melody at all, and that’s truly what’s holding back this line up. It isn’t that they’re trying to relive past glories on a name; it isn’t that they don’t have good songs – they just don’t always have the right voice to sell them. More retro rock provides the heart of ‘Heart of Stone’ and Bell sounds like he’s having a great time during the intro wielding a descending riff. The bulk of the tough rock tune that follows very much captures a late 80s sound with ease, and the punchy sound is a much better fit for Simon, whose gruff tones sound fine against a harder drum sound. Some listeners might hear faint echoes of old hard rock bands like Outlaw Blood and Shark Island between a very Autograph-esque stomp, which should have placed this among the album’s standout cuts. It’s a pity, then, that anyone forgot to write a chorus: a couple of lines in, at the point where you’re expecting to have heard a pre-chorus and for things to step up a gear, the band drops back into the verse, selling a great idea short.

Bulking out a rather hit and miss disc, ‘Gonna Getcha’ is bog standard hard rock that sounds like something Alice Cooper would’ve binned during the ‘Last Temptation’ sessions as “second rate”, ‘Feels So Good’ is another hard rocker that starts well before giving the listener half a chorus and could be absolutely any hard rock band decades out of time, and ‘To Be Together’ fills four minutes with Simon well out of his comfort zone, and with vocals that sound as if they were patched in (badly) from an old demo recording. The fact that this is the last thing you’ll hear when the disc stops spinning is hugely unfortunate. It makes an average album seem even worse.

Three or four great songs honestly doesn’t make ‘Beyond’ the kind of record that can be recommended – and, unfortunately, even the most forgiving Autograph fan might struggle with Daniels on some of this material. At the beginning of 2022, Giant proved that a band line up with little connection to their glory days could still serve up great material when ‘Shifting Time’ actually transcended the band name on the sleeve. As it is, though, Autograph can’t be afforded that luxury. In the main, ‘Beyond’ just doesn’t have the songs, or the production values that fans expect and deserve. Go and stream ‘Flying High’, ‘This Ain’t The Place…’ and ‘Run For Your Life’, then spend your money on the 2022 releases from Perfect Plan and FM instead.