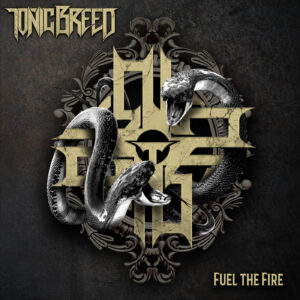 Tonic Breed is the brainchild of Norwegian musician Patrik K. Svendsen. On the band’s previous releases, he and his band gave metal fans a whole world of technical, thrash based sounds, but with this EP, he pushes even further into the realms of heavy melody. Now a one man metal juggernaut, he plays pretty much everything on ‘Fuel The Fire’, but by roping in a few friends along the way, it results in a short blast that could just be his finest work to date.

The EP’s lead track sets the tone with some solid thrash that takes the guts of a couple of Slayer classics, a pinch of Metallica’s core melody and a little industrial abrasiveness, to create a really intense sound. After a verse or two of this tried and tested thrashiness, it’s really easy for the listener to settle into something familiar even with a particularly abrasive vocal, but Patrik isn’t one to rest on his laurels, and a quick detour into something heavier brings extra excitement. This first detour adds a little melodic death metal to the mix; a second twist blends the thrash with a solid groove – much like a Megadeth tune circa 1990 (quite fitting considering Megadeth man Dirk Verbeuren guests here) – before taking time out to throw in an Arabic melody. Most of this sequence then repeats, trading in the Arabic bit for a scorching lead guitar break evoking the thrash demons of yesteryear, to create the kind of opener that’s impossible to ignore. Within these five minutes, it’s possible for a first time listener to get the measure of Svendsen’s chief interests, but it never gives everything away. The way this tune darts between three or four different moods suggests a composer who’s keen to keep things varied, and indeed, the rest of the material captures a similar restlessness without ever losing an important sense of focus.

Having now set the mood, ‘No Rocks On The Scotch’ opens with a sparse, almost gothic melody played by a cold sounding guitar, before exploding into what sounds like one of the finest Slayer tributes ever. The core of the track could easily be interchangeable with anything from their ‘Christ Illusion’ album with its lightning fast, jagged approach, but – very much as before – Patrik isn’t content with that on its own, and the track twists through a couple more brilliant metallic moods within its four minutes. There’s a little groove metal combined with a hardcore breakdown and semi-spoken vocal, some very heavy tribal drumming, and finally a tip of the hat to Megadeth via a riff that sounds like a lift from the classic ‘Five Magics’. Overall, it cements any feelings that this is a musician with some serious clout, before ‘H.E. Antagonist’ (featuring Oliver Palotai of Kamalot) slows things down via a blend of late 80s metal and a hint of thrash complexity on a number that sounds more like Trivium than Tonic Breed’s usual stock. It’s none the worse for any changes; the more melodic streak allows for a much broader guitar sound with some meaty lead flourishes, and a variation in vocals also accentuates a more commercial edge. If nothing else, it shows how comfortable Svendsen is working in different styles and how he’s able to adapt his own talents according to other musicians’ requirements. In some ways, with a bigger hook and a chunky melodic heart, this is the EP’s most enjoyable track.

Last up, ‘Blood Moon’ flaunts a chunky bassline, a horror themed guitar riff and crashy drums on a number that mixes twenty first century melodic metal with a very traditional mood. The howling lead guitar that’s used relentlessly throughout quickly dominates over a slightly growly vocal, but between some gruff gang vocals and a busier instrumental section where a few hard rhythms underscore the kind of cinematic melody that Metallica might have applied on their ‘…And Justice For All’ album if they’d been smart enough to think of it, this is a hugely layered arrangement. It mightn’t capture the raw energies of the opening duo, but in showcasing Svendsen’s varied talents, it gives the EP a strong closer.

Regardless of style, the riffs are consistently great throughout this EP, and although some of the vocals sometimes provide EP’s weakest element with their sub Tom Araya growl, the strength in the arrangements and song writing always wins out. By displaying the kind of anger and technicality that’s strived for by so many heavy bands, but also understanding how melody is key, Svendsen comes up trumps on this short release. Overall, this is a solid slab of metal that, even without the guests, would mark out Tonic Breed as one of the underground’s stronger acts.