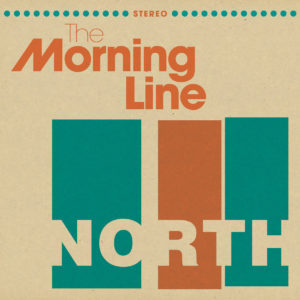 Combining the talents of singer-songwriter Stephen Smith and Bellyachers guitarist Brian Mello, The Morning Line are a jangling power pop/melodic alt-rock band heavily indebted to 90s sounds. They claim to appeal to fans of Ted Leo, Teenage Fanclub and a whole bunch of stuff in between and just one listen to their 2019 album ‘North’ is all it takes to realise that not only do they recycle a lot of influences with love, but every so often, they’re more than capable of hitting the listener with a very catchy chorus.

Their third release, this disc features a lot of their best work to date. That said, the album’s opener ‘Antennas’ seems an odd place to start this musical journey since it isn’t uplifting, hooky or an easy attention grabber. Described as a “slow burner” by the band themselves, its four minutes amble like the post-grunge indie rock of the Third Eye Blind debut meeting with the moody alt-rock sounds of the heavier end of Seven Mary Three. It’s a definite throwback to the 90s and once you’ve had time to adjust to the fact that it goes nowhere fast, it’s actually quite enjoyable. An occasional Costello quirk to the vocal adds a bit of extra interest, but it should never have been considered a “track one, side one” in a million years. That, of course, only makes the perkier material seem even sharper and when The Morning Line hit the mark, they do so with such an almighty blast, you’ll wonder why they aren’t better known. Such is the case with ‘1982’, a track that often sounds like something from 1982, only played a bit more aggressively. The slightly nasal qualities of Smith’s voice suit the song perfectly and the sharp rhythms and chiming guitars represent perfect power pop, that when augmented by new romantic synths as it is here, results in something that could be an instant classic. For lovers of early Matthew Sweet it’s a must-hear, especially since it’s a number that’s sharp enough to have you singing by the end of the first play.

Almost as instant, the clanging rock strains of ‘Anhedonia (Start Again)’ brings some fantastic nostalgia with sounds that throw bits of Better Than Ezra and Soul Asylum into the wind, greeting the listener with a world of chiming guitars against a steady four-four beat. It isn’t flashy by any means, but between a hugely user-friendly vocal and more muted chords than you could shake a stick at, the 90s revivalist sound is hugely appealing. Opting for a sound that fuses ‘Reckoning’ era R.E.M. with the kind of gusto you’d expect from an old Replacements platter, ‘Nostradamus’ is a full blast, full speed 80s college rocker that feels nostalgic in a slightly different way, but shows of the talents within The Morning Line just as well. Smith’s vocals drop somewhere between Elvis Costello and Dave Pirner; the music tears through a full one minute forty nine at full pace, never looking back…and the result is genuinely great. It’s a track where you’re able to crank the volume, and allow the music to transport you straight back to your youth. The healing power of music rarely felt better… With a steady beat and ringing guitar, ‘I Wanna Tell You’ returns to a moodier vibe. While the basic music draws from an echoing 90s sound, usage of twin guitars and – most importantly – a lead guitar that’s inflected with an alt-country mournfulness hints at a love for some of Uncle Tupelo’s more reflective material, before ‘Complicated’ hits the listener with a wholly enjoyable, volume driven workout that sounds like a cross between a Soul Asylum deep cut and something from the louder end of The Connells’ back catalogue. As with ‘1982’, the band’s love for a very simple hook wins out, but again, such an unfussy approach really suits the music.

Another slow burner, ‘Tripwire’ is actually another album highlight. With reverbed guitars and a steady drum beat, memories of the film score for Red Rock West are re-awoken and while at first it might seem like you’re about to hear something that sounds like Chris Isaak in a bad mood, once the pieces fall into place, it sounds more like a very eep cut from Neil Young & Crazy Horse. Smith’s slightly lazy vocal compliments the slightly distorted guitars; the slow pace appears to bring ‘Cortez The Killer’ into more of a modern age and, eventually, a howling backing vocal accentuates the feeling of being lost in a vast expanse of desert. The only drawback is the use of keys where a full string arrangement should’ve been, but not everyone has the necessary budget for such an extravagance.

A mid-range rock tune inflected with a touch of alt-country, ‘South Carolina’ again wastes no time in flaunting any love for Soul Asylum and Pete Droge & The Sinners. It doesn’t break any new ground, but as with the bulk of this excellent LP, the attention to the small musical details, along with the multi-layering of the guitars and a love of a hook bring something that’s quite wonderful. For those looking for a bit more rawk, ‘No Love Lost’ could really hit the mark by borrowing an old Rocket From The Crypt riff, cranking the distortion and applying the result to a fuzz rocker that sounds like a Paul Q. Kolderie production. It has very little in common with ‘North’s more Soul Asylum influenced tracks, yet at the same time, doesn’t feel forced. Across these couple of minutes, The Morning Line’s desire to truly cut loose brings another welcome listen, even if such aggression is at first unexpected.

Finally, allowing for a necessary wind down, the acoustic ‘Down The Aisle’ closes the album with a fine piece of Americana. A hushed vocal joins a simple strum, but it’s the presence of a ghostly steel throughout that really makes the track. Again, you’ll hear something that would never sound too out of place on one of Soul Asylum’s major label discs, but with echoes of Wilco and overlooked singer-songwriter Edward O’Connell to add that extra cool factor, it’s an almost perfect example of the style in hand.

With twelve songs, no duds and a willingness to help you reconnect with the greatest albums of your youth, ‘North’ is a fantastic record. Just fantastic. Sometimes reflective and moody, but often bringing good times via a world of chiming guitars and hooks that eventually get right under the skin, with this record The Morning Line sound fully charged and ready to give the world a cult classic. For those who still love ‘Girlfriend’ era Matthew Sweet, Soul Asylum and lots of stuff from the Fort Apache Studios, this should be considered one of 2019’s most essential listens.