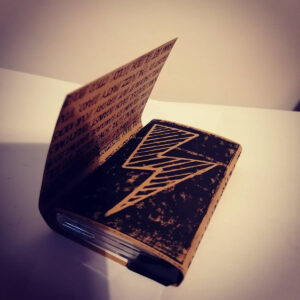 GTFOD’s decision to cover the Supergrass classic ‘Caught By The Fuzz’ proves to be as brilliant as you’d expect. The original cut has a cool fuzziness to it and a slight distortion placed upon the vocal. This cover really plays on that by taking the two voices and really putting them through their paces with a punkier sound, all the while underscoring the main melody with more bass than Death From Above 1979 could muster and basically turning it into lo-fi classic. In taking ‘Checkin’ It Out’, a rap tune by L’il Chris, and redressing it with extra fuzz, it almost sounds like a weird throwback to the 90s underground. There’s a really melodic bass riff lurking throughout and a hugely infectious chorus that allows James and Ren time enough to indulge in some great vocal interplay. By the time you’ve attuned to something that sounds like a Weezer meets Beastie Boys jam, it’s great. This recording has also been a handy reminder enough that the original version actually has a great vibe – it’s a real pleasure to now experience it with some serious musical beef.

Following on ftom the cover of ‘Screw’ on ‘These Songs Aren’t Ours’ (a natural choice since the original features a massive bassline), this collection features another nod to The Cure’s ‘The Head On The Door’ when ‘Close To Me’ is completely put through the ringer. A dual vocal just about clings on to a melody; the original cut’s cheeky musical hook is reproduced on something that sounds like a Casio keyboard and everything else is covered in the biggest and most distorted bassline this side of the young JJ Burnel. Within the noise and chaos, there’s still a recognisable melody that’ll amuse lovers of the original track. It really shouldn’t work, but it does. It’s probably fair to say that the purists will hate it, but what’s the point if you’re just going to play it straight? Further mildly disorienting fun can be had from hearing Meghan Trainor’s pop nugget ‘Me Too’ redressed as a lo-fi fuzz bass juggernaut (again) in the style of Death From Above; Andrew WK’s ‘Party Hard’ recycled as if it were written by The Beastie Boys circa 1982 and Juliette & The Licks’ ‘You’re Speaking My Language’ reimagined with some heavier Royal Blood swagger coupled with a Bauhaus-tinged vocal. If you’re not somehow moved by the combination of groove and shameless “woohoos” during the latter, there’s something wrong with you. With its massive crunch, it’s a thousand times better than the original cut.

Even when hammering through more “traditional” Dodge fare, these recordings bristle with life. A rendition of NOFX’s ‘Monosyllabic Girl’ provides a great showcase for the bass and includes one of the funniest Beatle-esque “woos” ever; Dwarves’ ‘I Will Deny’ offers a blast of straight up hardcore and the Dead Boys’ ‘Sonic Reducer’ delivers a no-frills slab of garage punk that not only gives listeners a brilliant bass groove, but also suggests James has a broader vocal range than suggested by most of the band’s usual output. Going further back to the punk source, The Damned’s ‘Love Song’ sounds insanely ugly, but if you’re a massive fan of fuzz bass and a very basic garage punk aesthetic you’ll love it, while Sex Bob-Omb’s ‘Threshold’ shows both a sense of humour and great taste in cinematic pastimes, despite somewhat gleefully subjecting the listener to the most tuneless vocal to grace a GTFOD recording. Thrown into the middle of all of that, ‘Manhunt’ (originally by Winnebago Deal) and could easily be passed off as a Fuck/Dodge original, while the angular style of Fugazi’s ‘Waiting Room’ shows off how much James and Ren have grown as musicians over the previous year. Setting up one of the best post-punk rhythms ever, Ren’s drumming is particularly driven during this performance (as always, recorded “as live”), and James’s choice of a higher register bass noise makes the duo sound more like a full band than usual. It’s something of a must hear.

It’s loud and chaotic and never pretends to be high art, but ‘These Songs Still Aren’t Ours’ is a great addition to the band’s rapidly recorded catalogue. Released at a time when social distancing was still in force, with many shops working on limited hours, a proper social life seemed half a world away and large scale gigs were little more than a rapidly fading memory, ths album definitely comes as a more than welcome distraction. In fact, between their seemingly inexhaustable energy, great musical taste, and willingness to put their own stamp on pretty much anything, the world somehow feels like a better place for having Get The Fuck Outta Dodge in it. It’s fair to say that if you like the idea of a boundless approach to cover tunes coupled with the extreme end of garage rock, lo-fi punk and hardcore goodies, you can’t afford to miss this.