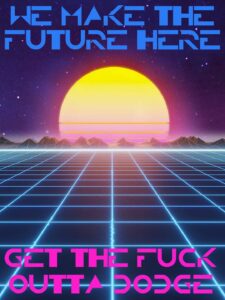 Sheffield duo Get The Fuck Outta Dodge are one of the best two piece garage punk outfits ever. Their fuzz heavy debut LP ‘Climbin’ Higher Than King Kong’ valued heavy fuzz over almost everything and by combining intensive riffs with a dual vocal attack, their barrage of crashy noises and shouting made an instant impression. It wasn’t especially original, but between some massively sweary hooks and lo-fi sounds it managed to be the best hardcore influenced noise since Mongol Horde unleashed their debut LP in 2014.

A follow up disc saw James (bass/shouting) and Ren (drums/louder shouting) tackling other people’s songs. Where as most garage/noise/punk duos might’ve played it safe and bashed out a bunch of Minor Threat and Black Flag ditties, GTFOD looked to broader influences and favourites. As a result, the fifteen track collection featured the expected Black Flag outings (‘Wasted’, ‘Nervous Breakdown’) alongside several more inventive choices. A bass heavy rendition of The Cure’s ‘Screw’ showed great musical taste; their abilities to twist Fuzzbox’s pop classic ‘Pink Sunshine’ into a distorted burst of anger made them deserving of a much wider audience; a resurrection of Whale’s ‘Hobo Humpin’ Slobo Babe’ lent some unexpected nostalgia and a punked up take on Rollins Band’s ‘Get Some Go Again’ acted as a perfect showcase for the duo’s defiantly angry sound. A covers album that’s well put together covers is always fun…and ‘These Songs Aren’t Ours’ offered at least eight reinventions destined to become favourites.

Released in September 2020, ‘We Make The Future Here’ features material that was written after the songs appearing on Fuck/Dodge’s second album proper (a record that, perversely, wasn’t due for release until afterwards!) and each one of its five tracks adds something to the band’s legacy of wondrous noise. In a little under a minute and a half, the title cut flaunts an angry bass sound throughout and attacks the listener with more shouting than ever. The results fuse a pure anger with a fantastic fuzzy garage punk edge worthy of the Beastie Boys’ ‘Aglio E Olio’ EP from 1995 (an essential collection filler), setting up this EP with a banger that should prove hard to beat. The band manage to at least equal that, though, with ‘Let’s Get Fucking Physical’, a heavily distorted workout that couples an ascending bass riff with some casual swearing, a cheeky reference to Def Leppard and an extra, unexpected hook that seems destined for crowd based shouting…or at least would be had this EP not been released at a time when such activities were verboten.

Although by no means any real musical leap from the previous tracks, ‘Fight Like A Bear’ packs Fuck/Dodge’s riff-heavy gifts into a hardcore friendly forty seconds, throws out a repetitive lyric and assaults the listener with a tightly wound punk riff. In terms of tiny packages, it’s fully formed…and in terms of showcasing the band’s core sound effectively, you’d be hard pressed to find something better. Rounding out this short release, the double whammy of the amusingly titled ‘Never Seen Con Air’ and ‘Art of A Good Put Down’ shows the duo in a position of strength. Although the former merely gives the listener more of the same as per this EP’s first couple of numbers, the way it fuses a distorted and spiky riff with a repetitious hook creates more great hardcore, while the later opts for a more groove oriented mood by dropping the bass a couple of notches and applying a tribal-esque drum part. This is pretty much guaranteed to entertain extant fans while pricking the ears of the first time listener.

Their core sound might not always be 100% original (no garage/punk truly is) but Get The Fuck Outta Dodge continue to play with a style and spirit that’s almost timeless. If you have any interest at all in lo-fi noise and old hardcore moods at all, you’ll absolutely love this…guaranteed.