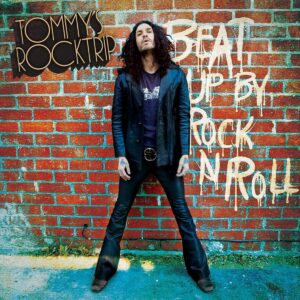 Tommy’s Rocktrip is the first project that puts Tommy’s name out there as the star, but it isn’t really a solo project in the traditional sense. ‘Beat Up By Rock ‘n’ Roll’ – a new release for 2021 – sees Clufetos joined by ex-Slash’s Snakepit vocalist Eric Dover and various other assorted musician friends on a record that sounds like a true collaborative effort. On the best songs, Dover rises to the occasion as a great and versatile hard rock vocalist (despite fronting pop champions The Lickerish Quartet as his current day job at the time of release) and bassist Elliot Lorengo helps anchor a great sound, but there’s often something about the material and the way it’s presented that you couldn’t mistake it for anything other than a drummer’s record.

Although he has a great band in place, what’s perhaps most impressive is the way that Tommy uses this material to shift effortlessly between different styles. Also, despite being made up of brand new compositions, there’s something about so many of the songs that seems old and familiar; their inspirational nods are obvious, yet they have the strength and confidence to rise above basic homage. The best example of this comes from ‘Got To Play Some Rock N Roll’, a thundering juggernaut of rock that’s very obviously derived from early Van Halen. complete with a clattering drum part that would make AVH proud. Clufetos sets up an unstoppable groove while the guitars blend a sharp and relentless hard rock sound with a smidgeon of southern rock cool. This could easily be a 1978 vintage, but it still sounds like a band raising the roof, especially with Dover squealing his way through the performance with an absolute delight. Equally as energy conscious, ‘The Longevity’ taps into something that often sounds like a throwback to Bon Scott era AC/DC colliding with Pat Travers. Its forever cocksure sound gives each bandmember plenty to get their teeth into – and, indeed, by the midpoint, the level of fun that’s been whipped up seems almost incendiary. Eventually slowing down into more of a blues/funk/rock groove, traces of Great White and early G N’R play out while guitarists Hank Schneekluth and Nao Nakashima trade solos, bringing a different style of rock to the fore, while simultaneously suggesting a full on performance. Even more retro, ‘Kid Blood’ works a mean 70s shuffle with ease, as Tommy and friends imagine they’re dancing on the coattails of classic Skynyrd before driving the riff towards the harder end of Bachman Turner Overdrive. As before, it’s sort of fun in spotting the various influences – Tommy surely expects his audience to do so – but the way they’re always recycled with a knowing wink makes it all seem rather charming. In terms of classic rock, it’s superbly played.

Another highlight, ‘Make Me Smile’ presents a big boned guitar part that sounds like an unholy hybrid of Foghat and Cry of Love, instantly throwing Hank Schneekluth into the spotlight as he underscores a fuzzy vocal. Tommy takes on that lead vocal himself, and although he’s not a patch on Dover at his best, there’s a certain appeal in the way his heavily distorted performance seems to sit comfortably against the huge riff. In so many ways, though, that huge riff wins out at almost every turn, and the band really seem to get off on cranking through a really cool groove. ‘Do It Again’ tackles something that, in the riff stakes, could challenge newer rock bands like Bad Touch and Big River. The the natural flair Clufetos brings to the rhythm, though, lends something of a groove laden edge that many blues rockers lack. He brings a genuine finesse without lightening up the sound, and his drum fills – highlighted through some great breaks during the second half – are the natural successor to a vintage Ian Paice. With Dover finding a vocal sound similar to a mid-90s Robert Mason, there’s so much to love here, original or otherwise.

Previously released as a digital single, ‘You’ve Got The Cash, I’ve Got The Flash’ is a little more rough and ready, something not helped by a slightly less slick production mix, but there’s enough in its classic rock stance that’ll appeal to anyone willing to go along for this rather knowing ride. There are a few elements here that appear to have been inspired by Purple’s ‘Highway Star’ – something certainly further accentuated by the presence of a Hammond B3 – but any similarities are slight compared to obvious lifts on other tracks, even with Schneekluth desperately trying to unleash his inner Ritchie Blackmore via an aggressive solo. Despite the whole band playing up a storm, the real star is Eric Dover, who – somewhat unexpectedly – has chosen to deliver his performance in the style of Eric Martin in an aggressive mood. It shouldn’t work as well as it does, but when a band seems this confident, it’s hard not to argue. Elsewhere, the title cut reverts back to classic late 70s AC/DC (even more so than before, this time sounding like something entirely lifted from ‘Powerage’) and ‘Welcome To The Show’ goes all out in terms of sleazy, glammy metal with a dirty undercurrent, almost like a weird flashback to the early 90s and bands like Roxy Blue in their full pomp. As you might expect from his past with Slash’s Snakepit, Dover steps into this role like a man slipping on some comfortable shoes, yelling throughout like he’s never moved on from the world of ballsy hard rock. By the time Schneekluth steps in with a really punchy solo, this becomes something of a retro-modern classic.

With a boundless love for all kinds of rock from a thirty year stretch, recycled into something with an even bigger sound, almost every one of this album’s fifty minutes is a genuine pleasure. If you’re in the market for a no-nonsense, big booted, classic hard rock album that’ll remind you of your youth and yet still sound really sparky, look no further. Tommy’s Rocktrip delivers the goods on all fronts…and then some. Highly recommended.