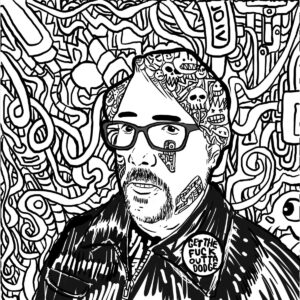 As prolific as they’ve been, there’s always been an eye on quality, and ‘Buzzkill’ – their main album of the year – finds the duo sticking to their distorted, Death From Above and early Beasties bass/drum fuzz, but also shows a willingness to stretch out a little. A few of the numbers are more melodic than before – relatively speaking, of course – but extant fans will certainly love the array of noise on offer throughout.

At their most experimental, ‘Still No News From Above’ stretches from their preferred minute long approach to a full two and a quarter and fills that time with various musical treats. At the outset, James sets up a fantastic bass riff. With more than a trace of Death From Above 1979 driving its distorted sound, his playing is both muscular and surprisingly melodic. With more of a fuzzy garage rock backdrop coming at the expense of the expected hardcore, the duo hit upon a solid groove, but as good as the music is, it’s the chorus that wins out with the title repeatedly shouted with intent. That seems as if it’ll be good enough to create a standout track, at least until an instrumental break arrives. It’s then that GTFOD’s musical abilities really become apparent…and in an unexpected way, too, when the main melody is borrowed from the middle section of Mountain’s ‘Nantucket Sleighride’ (which surely no-one expected). What’s more, that familiar tune sounds superb when recreated in a hugely distorted way.

‘The Norm’ cranks the distortion and volume but, more importantly, finds drummer Ren locking into a deep tribal groove during the verses, which creates an intense and dark mood that instantly catches the ear. The crashy cymbals introduced elsewhere revert more to a traditional Dodge sound, but with elements of fuzzy hardcore punk underscoring a repetitious refrain, it takes on an almost timeless stance. Also brilliant, ‘Go Vandals GO!’ sets up a brilliantly shouty hook and places it against a bass riff that injects an unexpectedly buoyant mood into a hardcore sound. A great showcase for James’s busy style, the recording again takes cues from the Beastie Boys’ ‘Aglio E Olio’ EP and early Black Flag tunes but between the shouty hook and some tight playing, it’s proof enough that lo-fi hardcore never gets old. ‘Trying Not To Be Punk Is The Most Punk Thing I’ve Ever Done’, meanwhile, rattles along at breakneck speed. Carrying the kind of riff that invites old fashioned pogoing, it’s got some genuine balls and although that rhythm gets derailed in order to shoehorn in a wordy and slightly clumsy refrain, it doesn’t spoil a great track.

For lovers of an overdriven bass sound, ‘Karen’ will surely impress, and it’s good to hear the band slowing down just enough for some fat melodies to take centre stage. It’s also a great showcase for the band’s dual vocals, with James’s direct style and Ren’s harsh screams taking on distinctly different roles but both contributing equal goodness to the ensuing noise. It wastes no time in creating a great groove oriented sound that might remind a few listeners of the much-missed That Fucking Tank. However, once the vocal kicks in and everything takes on more of a hardcore stance, there’s plenty here that calls back to prior Dodge recordings and, as such, this makes a fantastic addition to their growing catalogue. ‘Flag’ works a superb, almost swaggering bassline where more of a stoner rock mood informs the performance. There’s a lot in both the style and weight of the arrangement that might just remind some listeners of the much missed That Fucking Tank once more, although once James starts shouting, there’s more than enough at play that makes this easily recognisable as Dodge in a bad mood.

Elsewhere, there isn’t always much to differentiate the tracks, but if you’re already familiar with the band, you’ll more than love their no nonsense and business-like approach. The title track presents blistering hardcore where – in well under a minute – James and Ren really hammer a call and response vocal; ‘Snitches Get Stitches’ attacks with speaker breaking levels of distortion where the only respite comes from an interlude where higher bass registers add a slightly arty Minutemen slant, while both ‘I Said GOD DAMN’ and ‘Some Basses Are Better Than Others’ crank massively retro hardcore where a prevailing love of classic Black Flag and early EPs from Dischord Records lends a strong musical heart.

Packing eleven numbers into seventeen minutes, ‘Buzzkill’ is an intensive crash course in Get The Fuck Outta Dodge’s hardcore/garage punk assault, but still manages to show musical growth. Yes, it’s noisy and absolutely fuelled by anger and distortion, but by stretching out a few of the arrangements to allow for a fuzz-blues element, some material is more accessible than before. If hardcore punk and lo-fi garage doesn’t do it for you, there will still not be anything here that’ll win your affections, but if you’re the kind of person who still reaches for those early Black Flag, early Beastie Boys and OFF! discs, then this certainly won’t be short on entertainment value. With its combination of anger, classic hardcore spirit and lo-fi cool, there’s every chance that ‘Buzzkill’ could be vital in making Get The Fuck Outta Dodge one of your new favourite bands.