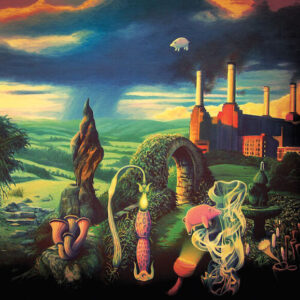 An all-star reworking of ‘Wish You Were Here’ issued in 2021 proved similarly divisive, but was well received by some more open minded fans, but this 2021 reworking of Floyd’s ‘Animals’ is likely to split opinion even more. This is down to the original material not being anywhere near as accessible in the first place, but also due to the album’s biggest fans tending to be very vocal. As with the the previous Floydian tributes, not all of ‘Animals Reimagined’ works, but there’s some gold to be found within.

Bookending the album, the two shorter ‘Pigs On The Wing’ pieces are tackled with different musicians on each, and this brings a slightly different slant each time. ‘Pigs On The Wing, part 1’ brings together Cutting Crew’s Nick van Eede and Jethro Tull legend Martin Barre. Obviously, they don’t get long to show how well they work together, but it’s interesting that instead of going the easy route and capturing something that calls back to Tull’s folky side, Barre’s acoustic lilt more closely resembles a Mark Knopfler film score. Slightly unexpected this may be, but it works well for the job in hand. Vocally, Nick is fine; he approaches the lyric with reverence, and moving between a hushed unease into a slightly theatrical croon, he gives the piece just enough of his own character to make it worthwhile. The stronger of the pair, ‘Pigs On The Wing, part 2’ features Yes man Jon Davison who applies a fine yet confident tone to the more reflective lyric. Davison’s tones naturally make the track seem more like a piece of latter-day Yes filler, but with his voice set against Albert Lee’s shimmering guitar and some understated keys from Billy Sherwood, it’s quite pleasant.

One of the darker pieces on ‘Animals’, ‘Dogs’ will certainly be contentious among outspoken Floyd heads. Its opening provides this album with something that closely resembles the original cut, with guitar hero Vinnie Moore recreating David Gilmour’s acoustic work almost perfectly whilst Dream Theater man Jordan Rudess underscores the main melody with a very 70s synth sound. The lead vocal is left in the hands of Graham Bonnet, a bona fide rock legend who has no real link with prog. That’ll be enough for some people to feel he has no place here. They’re wrong. Bonnet is a versatile performer, and his voice suits the track’s bombast very well. He’s able to recognise that the bitter lyric can be reinterpreted in different ways and know that this would be a welcome opportunity to deliver it in more of his own style without losing too much of the overall feel. His voice is huge, but at first, it features none of the metallic edge that has driven his work with Alcatrazz in the past. Instead, the early verses adopt a booming and theatrical presence, which he offers with a natural confidence. Throughout the bulk of the track, he dominates with a recognisable style and although it feels strange to hear those familiar lyrics from the voice of Rainbow, it turns out great, especially during the brief funky interlude just before everyone gets “dragged down by the stone”. Also great is Vinnie Moore’s guitar work, since he’s dared to inject a slightly heavier sound into Gilmour’s floaty style in a few places, but also retained all of the melody during the harmonious section at around the four minute mark, presenting the best of both worlds. The later solo coming in at around six minutes takes Gilmour’s melodies into a heavy blues sphere, but again, show off a player who is capable of a broad scope. Jordan’s keyboard work is less fortunate; after turning his hand to the intro in the most perfect way, his further interpretations of Rick Wright’s musical flair waver between heavy handed and ugly. The huge ambient section in the middle of the track is especially bad, with Rudess chucking out widdly noises more akin to Vangelis circa ‘Spiral’, almost drowning out all of Kasim Sulton’s bass work in the process. ‘Dogs’ has its good points – and hearing Bonnet cut loose on the really angry closing section is a marvel in itself (regardless of whether you think his take on it is good or bad) – but Rudess misjudges his role at almost every turn after the first minute. Still, there’s been enough interest along the way to entertain, and between Bonnet working slightly outside of his comfort zone, Moore taking in a broad spectrum of guitar sounds with ease, and King Crimson’s Pat Mastelotto holding everything together, it’s definitely worth hearing.

An unlikely union between jazz fusionist Al Di Meola (guitar), ex-Blue Oyster Cult man Joe Bouchard, drummer Billy Cobham, and ex-Yes keysman Patrick Moraz on ‘Pigs (Three Different Ones)’ is much less fun. As with ‘Dogs’, the intro is so perfect it could pass for a live take of the original, until a slightly rougher rhythm guitar chimes in. The musical backdrop then becomes a little rockier than expected, but certainly no less enjoyable for that. The taut rhythms are handled very well, but in many ways, it’s a shame the tune is so rigid; a jazz drummer with the kind of chops Cobham possesses deserved more of a challenge than he’s handed here. He plays with grace, but you know he could work a Nick Mason drum part in his sleep. Like Rudess, Moraz takes the opportunity to introduce a few different keyboard tones but, unlike Rudess, his experiments – erring on the side of a weird early 80s fusion experiment – are actually rather striking. Most of the other musical highlights supplied by Bouchard bringing some pleasing, fluid basslines, but in the main, the arrangement feels quite safe. It’s sometimes hard to hear its finer points behind the vocal, though, and Dream Theater’s James Labrie absolutely murders the track. Granted, Roger’s angry whine was hardly Paul Rodgers, but Labrie’s painfully loud and boorish approach almost sounds like a comedy performer in full flight, ripping the piss out of old style metal acts. He bellows like a man in agony, spewing each syllable at full volume and with a weird deep twang. It’s genuinely horrible. On the higher notes, he even sounds like someone doing a bad impression of Les Claypool on the Frog Brigade recording of the same song. Jesus, Jim; this is awful. There are at least three dozen people who’d have made a better job. Despite some good music, this is the worst track here by far.

In its original clothes, Pink Floyd’s ‘Sheep’ is a scathing masterpiece. This tribute has plenty of moments that are just as cool, but in a very different way. The legendary Rick Wakeman throws some loose jazz chops into the wandering intro; Focus legend Jann Akkerman fills space with various blues oriented noodles that hint at a growing familiar melody without obviously being ‘Sheep’, and – the album’s other left-field choice – David J from Bauhaus teases with punchy bass notes throughout . Eventually, everything aligns and the assembled band, driven by a hefty drum part from Carmine Appice, throw themselves head first into a swaggering riff. With the rhythm guitar transposed to a less melodic, almost post-punk fuzz, this quickly becomes the album’s most interesting offering. The looser approximation of the material also makes itself felt through a lengthy instrumental where Wakeman drops in various tinkling keys and Akkerman makes his blues guitar howl. Sounding far more like something from the ‘Saucerful’ era Floyd, it shows that a few liberties can be taken and still work out brilliantly. Unfortunately, all of this brilliance becomes moot once the vocal is taken intro consideration. The Godfather of shock rock, Mr. Arthur Brown, sounds like a reanimated corpse throughout; he moans through the verses as if in deep distress, grumbles through the coda as if he doesn’t even remember what he’s supposed to be doing, and even sounds like he’s impersonating Strawbs man Dave Cousins during the spoken word abattoir prayer. It’s sort of interesting in a car crash way, but it’s never pleasant. However, the sheer audacity of it automatically makes it more preferable to ‘Pigs (Three Different Ones)’ with Labrie at the helm.

It’s very interesting to note that the most of the engrossing performances – both good and bad – come from those without close ties to the prog scene. Bonnet and Moore, especially, seem less interested in treating the material like a sacred cow and have been unafraid in injecting more of their own personalities; as has Arthur Brown, of course, creating something that will never be unheard. In the main, there’s a fair bit of tiptoeing around by some of prog’s old guard (Wakeman excluded), which brings us to another important point: could they not find any genuinely new blood, even within the prog scene? Surely there is a wealth of talented people out there under thirty who would’ve liked to get involved with a project like this? Although ‘Animals Reimagined’ features a couple of musicians from different musical circles, it still feels like an outing for The William Sherwood Self-Congratulatory Boys Club (est. 1993) dominated by the same old faces. It’s a hit and miss listen, to say the least, but its good bits certainly make it worth hearing – and the version of ‘Sheep’ is positively revelatory, albeit not always in a good way. As enjoyable as some of this has the potential to be, though, it’s fair to say the biggest Floyd fans should approach with caution.