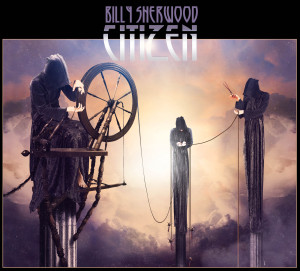 Over the years, when not involved with Yes as a whole, Sherwood continued to record. He placed his distinctive talents on all-star tribute albums for labels such as Magna Carta and worked alongside Chris Squire on a couple of enjoyable and fairly commercial releases under the Conspiracy banner. If nothing else, Sherwood could always be relied upon for enjoyable and accessible material…and ‘Citizen’ very much follows that trend. A star-studded affair, the album allows Billy time enough to deliver plenty of very familiar sounds, while a broad concept and a host of familiar musical friends – including a half-dozen faces from the Yes family tree – allows him to stretch a little farther than before. If you liked any of Sherwood’s previous offerings, will you also like this? In a word…YES.

The title cut opens this musical journey with a slow chord progression, with multi-tracked guitars and keys running through a rather grandiose riff. Sounding more like a bombastic climax to a theatrical rock experience, it also works quite well as an overture. Dropping back, Sherwood’s voice makes its first appearance, understandably sounding a little more world worn than in those days of World Trade or Yes’ ‘Union’ (an album a thousand times more appealing than Rick Wakeman would ever have you all believe). His performance is underwhelming at first, always playing second fiddle to a fairly bombastic arrangement, but as he rises again to cry the title, there’s more of a feeling that there’s more going on here than first appears. Guesting on bass, Chris Squire cranks a fat tone; he nature of the material never really allows him to cut loose on his final recorded work, but the rather sombre nature is somehow fitting, casting The Fish in a stately and unshakable role – few bassists have any near as much graciousness and gravitas. The musical showmanship during this opener comes from the first in a long line of Yes keyboard players, Tony Kaye, whom at the midpoint, launches into an unashamedly widdly but brilliant solo, thus reeling in the hardened proggers. Overall, a solid start, but Sherwood devotees may find themselves feeling this isn’t up to his previous standards. Of course, this is merely the beginning and from here on ‘Citizen’ really gathers momentum. ‘Man and The Machine’ stokes up both the pace and techy elements, with great use of synthesized mechanical sounds and a punchy arrangement that harks back to the first World Trade recording. Although heavily filtered and multi-tracked, Sherwood’s vocals sound all together more enthused and the AOR melodies contrasting with busy, proggy basslines and a vocal counterpoint provide a decent – if overly familiar – listen. Guesting on guitar, Steve Hackett drops in with a masterclass in how to fill a minimum number of bars with a maximum amount of interest; clearly going for originality, his featured solo is occasionally discordant – presumably to fit the mechanical feel of the track. Those hoping for something easily recognisable as Hackett’s handiwork, perhaps heartwarming and emotive like the classic solo from ‘Firth of Fifth’ will feel hard done by, but there’s no denying he’s one of the finest players, and it’s great that he’s on board with this project.

Outshining anything that has gone before, the slow and almost folky ‘Just Gallileo and Me’ is the album’s first real stand out. While clinging on to the overall shine and a world of filtered backing vocals, this number has far more to recommend it to listeners unfamiliar with Sherwood’s work. With a slow and warm bassline, occasionally coming forth with a lovely descending riff, it comes with a more melodic structure, while the use of soft harmony vocals and a mandolin sound provide a lovely and almost comforting adult pop-rock experience. That might’ve been enough alone to secure a place as one of the album’s best tracks, but the presence of XTC man Colin Moulding on lead vocals cements its greatness. Moulding, a man with a great talent kept too quiet since the dissolution of XTC, retains a very accessible vocal approach, his voice like a visit from an old friend. The natural delivery also provides a strong contrast with Sherwood’s own – often strongly filtered – high tenor. This is a brilliant track, indeed.

Shifting back to techy AOR, ‘No Mans Land’ has a very hard keyboard sound and even sharper guitar, both of which punctuate a warbling bassline providing the core of a World Trade inspired tune. Extra vocal effects that make Sherwood sound like he’s singing down a telephone line are perhaps unnecessary, but a instantly likeable chorus hook and superb musical backdrop more than make up for that. It’s all very much a musical comfort blanket for Sherwood, but by the arrival of Steve Morse’s bluesy toned and rather busy lead guitar solo, the track elevates from being good to great. Without the vocal effects, it could easily have been one of the album’s absolute best. With a more natural tone, a soft guitar and piano leaning towards 70s radio friendly sounds and with Sherwood’s bass less dominant, ‘The Great Depression’ brings an unexpected ballad. Although never flashy, a strong piano melody is key to everything here, with a wonderfully lilting style supplied by another on/off Yes man, Mr. Richard Wakeman, Esq. Those who’ve never quite taken to Sherwood’s preferred high-tech eighties obsessions might want to take a listen to this track – its far more reflective nature brings out the best in all concerned. Changing the mood, ‘Empire’ centres around dirty guitar tones and an altogether choppier rhythm. Handling vocal duties, Alan Parsons lends an understated style which appears a perfect fit for the mid paced workout, especially when accompanied by Sherwood’s own wall of voices. A track that requires plenty of time to really get under the skin, its combination of warm bass, AOR hook and unashamedly proggy soloing covers almost all of Sherwood’s favourite moods within a mere five and a half minutes – a masterclass of melodic prog; this might just be essential listening.

Almost recalling the musical theme of the title track, ‘Age of the Atom’ offers huge and bombastic chords at first, with the bass cranking against a wall of keys. Handling those keys, Geoff Downes (Asia/Yes) plays with a completely different style to that of Wakeman – particularly so during a frenetic solo – Sherwood clearly showing a strong musical vision when hiring his many honoured guests. Most of the track comes over like another throwback to World Trade, but for that, it’s likely to please almost all listeners with an interest in this particular disc. The smoothness at the outset of ‘Trail of Tears’, meanwhile, occasionally reminds of Howard Jones’s more thoughtful material circa ‘In The Running’, though without losing too much of Sherwood’s style. Patrick Moraz, a fleeting but very important Yes man, doesn’t appear to bring much to his guest spot to begin with, since the keys are restricted to fairly flat sounds, but much like the contribution from Downes, Moraz eventually finds the space to deliver a complex solo, which in turn pushes the bass into busier territory, so what began as a fairly soft piece ends somewhat differently. With the musicians bouncing from each other, while linking everything, the chorus hook eventually presents itself as one of ‘Citizen’s most enduring. ‘Escape Velocity’, on the other hand, is a little jarring. A jaunty rhythm kicks things off, before dropping back into a moderately bouncy tune and then back again. The chorus and faster riff sound like the musical equivalent of running on the spot; the slower moments sound like an incomplete sketch for the Yes track ‘Step Beyond’. The constant shifting between the two styles gives the impression of the melding of two incomplete works – unlike the Yes players, Dream Theater’s Jordan Rudess makes no attempt to link things with his soloing – but once you’ve tuned in it’s not so bad…it’s just never going to reach the heights of ‘Citizen’s finer offerings, but then few albums are perfect.

The quasi-funky ‘A Theory All It’s Own’ provides another essential cut, its busy workout bringing more focus to Sherwood’s now in demand bass chops, his fractured playing presenting itself with a big Squire-indebted sound. Like a frenetic tribute to Yes’ ‘Big Generator’ and ‘Talk’ era material, Sherwood’s talents for arranging are clear throughout, as the attention constantly shifts between the big vocal, synthy rhythms and classy guitar work – provided on this occasion by the very talented John Wesley. Fans of ‘Talk’ era Yes might raise a knowing eyebrow, and in terms of it’s place within ‘Citizen’, this is a track to return to time and again. …And if that number marks a stronger bond with Sherwood’s place within the Yes family, then the closing number ‘Written In The Centuries’ is the true transition. Acoustic guitars, etherial vocal harmonies, a strong bass acting as backbone: if this sounds like Yes, then the presence of Jon Davison on lead vocals cements that fact. Odd and slightly jarring guitar break aside, so much of this track sounds like the natural successor to ‘Heaven & Earth‘, a stepping stone to the future. As this track ends, there’s a feeling of having heard something special…and looking at the closing numbers as a pair, ‘Citizen’ ends on a high note – far more melodic and in a far more interesting fashion than it began.

‘Citizen’ is not as immediate as the first Conspiracy album, nor is it as polished or consistent as the World Trade debut (which remains the best thing to emerge from Sherwood’s long career). On first listen, parts of it appear underwhelming – particularly those first two tracks – but with a little patience allowing the more subtle elements to work their magic, most of the material sounds better with each play. Worth picking up for Colin Moulding’s contribution and the last two tracks – both of which are near faultless – there’s actually a lot to enjoy here. For those who liked Conspiracy, still reach for ‘Big Generator’, or perhaps even long for a grander, more narrative driven, slow burning cousin to the brilliant Arc Angel release from 2014 (possibly the greatest World Trade album World Trade never made), ‘Citizen’ might just become a favourite in time.