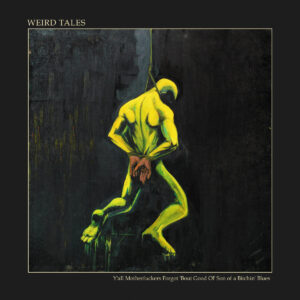 Their follow up release – the clumsily titled ‘Y’all Motherfuckers Forgot ’Bout Good Ol’ Son of a Bitchin’ Blues’ – purports to be a blues covers release. You’d think, with a heavy band taking on more of a bluesy slant, you’d be in for something more melodic; maybe, if the listener is lucky enough, Weird Tales might just present something in the mould of Goatsnake’s 2015 LP ‘Black Age Blues’, or even a much heavier variant on something from the Clutch or Black Furs back catalogues. You might also hope that with other people’s musical frameworks in place that Weird Tales might become more melodic by default. Well, you’d be wrong on both counts. Although four pioneering blues men are credited with writing the original songs, in the hands of Weird Tales, their material is twisted beyond recognition…and rarely in an enjoyable way.

‘Got The Blues For Murder Only’ (originally by Lonnie Johnson) takes on a massive stoner metal vibe when the band take a simple blues and heavy it up by a thousand percent. From the opening wall of feedback and distortion, an insanely sludgy riff rises. While this potentially sounds good in its own way – especially if you’re well versed in bands like Tuskar, Witch Mountain and Spacebeast – it begins to outstay its welcome somewhere around the end of the first verse. This isn’t the fault of the riff itself: the way the heaviest moments are broken up with small bursts of ringing noise brings just enough respite from the heavy, suggesting some movement. The problem lies more in the way it fits with the vocal – or in this case doesn’t. The echoing lead voice attacks with a really flat and slightly accented delivery, which further adds to the atonal feel of the whole thing. After two minutes, listening fatigue truly sets in and by the time a lead guitar break introduces a stoner rock vibe via a particularly out of tune performance, you’ve already forgotten this is an old Lonnie Johnson tune. With a better performance, this is where you should start to enjoy the song on its own merits, but in its present form it’s just sounds like a doom band struggling through a tuneless rehearsal.

Blind Willie Johnson’s ‘Dark Was The Night, Cold Was The Ground’ has been retitled ‘Too Fucking Cold, Too Fucking’ for no good reason, and reworked as if experiencing an old Melvins track played back at 12rpm. On its own merits, that heaviness is cool, and for once there’s a decent musical balance between the bass heavy sludge riffs and the bluesy howl from Dima’s lead guitar. It shows that Weird Tales can play – seemingly they don’t always want to, but they can – and although this comes across as somewhat generic, it at least provides this EP with a half listenable performance. A lot of that has to do with it being instrumental; sludge metal always works best when working with expansive instrumental passages anyway, but on the basis of this, Weird Tales seriously need to rethink the position of their lead vocalist, since the other tracks are definitely held back by poor vocals. Better as it may be, its still very much the kind of thing you can experience in a superior fashion from bands like Tuskar. The Muddy Waters recording ‘Take Sick & Die’ is reworked with an effective stoner metal swagger where Kava’s drums take a fair amount of the weight. The riff has a definite groove and a decent melody, giving hope that Weird Tales can pull a second decent performance out of the bag. Unfortunately, the show’s over when Dima starts to sing – or, in this case, wail like a man who’s been drinking for several hours. He adds various non-melodies to an otherwise strong riff, and even though this track pulls in at a short and sharp four minutes, the terrible vocal just makes it feel as if it drags on forever.

Their Skip James “cover” (‘Hard Time Killing Floor Blues’), on the other hand, does drag on forever. Its dreary seven minutes take the listener through various moods – each one more boring and tuneless than the previous. Opening with various off key wails gets the performance off to a terrible start and things seem to slide from there. The riffs crank with extreme volume, but unfortunately, the awful vocal follows suit and resembles a wounded animal. Moving into the next section of the performance, any blues or emotion is replaced by repetitious grinding which just about rises to sounding like an old Crowbar tune played by hapless beginners. To add insult to injury, most of this musical cycle of atrocities repeats until the band have bored themselves, or at least are confident their audience have lapsed into a coma. When approaching sludge metal, there’s always a risk of things becoming predictable or boring, but you’ll rarely find something as dull as this. If Skip James has any surviving relatives, they ought to seek compensation for having the family name sullied so badly.

At best, this feels like a demo recording and you’d hope that any flaws would be fixed in a couple of later, more focused takes. But no, this is it: these are the best performances Weird Tales believe are worth sharing with the world. At worst, this EP contains four boring dirges that show no love or compassion for the source material. Sure, the instrumental coda on ‘Hard Time Killing Floor Blues’ and the intro to the Blind Willie Johnson track just about pass muster, but they’re the kind of thing you’d still find played better on a hundred other sludge metal releases without having to suffer the indignity of hearing the work of blues heroes destroyed along the way. Between the blatantly offensive title, nasty vocals, and the band’s taking the once seminal works of legendary blues men and making them sound unbelievably awful, there’s absolutely nothing to recommend this release to even the most hardcore sludge freak. …And that’s without taking the choice of sleeve art into consideration: given the era in which these men lived – a time of extreme racism and segregation – a drawing that looks like someone being lynched comes across as especially bad taste. That just about fits with the amount of respect this band has for these musical pioneers.

With this release Weird Tales reach a new low. They aren’t just bad, they’re a vulgar embarrassment to the doom metal community.