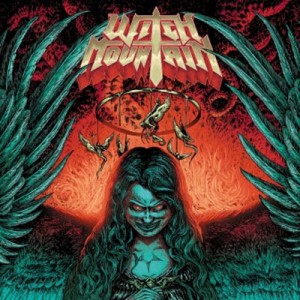 The album’s opening number is among its most challenging.  Never giving prospective listeners an easy ride, ‘Psycho Animundi’ simply does not mess around.  It begins slowly and heavily, churning out a singular chord for the main part of its riff, occasionally shifting to a second briefly before switching  back – and things continue in that manner for the better part of eight minutes,sapping the energy from everything it encounters en route.  It’s downtuned riff has a truly huge presence crossing dirgy blues with doom metal, almost void of any lightness.  There are passing resemblances to Goatsnake and Cathedral and various other classic doom bands, but the overriding effect is almost like hearing an early Black Sabbath LP played at 15rpm.  In total empathy with the leaden riffs, the drums pound at a funereal pace – a decent mix giving everything the sense of being recorded live in the studio. Any obvious melody this opener possesses is in the hands of Plotkin whom (after a slightly indifferent first verse) takes every line and weaves magic with her delivery, often sounding like a demonised Grace Slick.  For those tough enough to make it past six minutes of brutal riffs, a short burst of respite finally comes when a quieter, multi-tracked vocal cries rather more empathetically against a clean guitar line and warm bass.  Uncompromising it may be, but it’s impressive.

So, once Witch Mountain have let their guard slip and shown they have melody as well as power, are they going to give a more accessible performance on the album’s second track, ‘Can’t Settle’?  Not even a bit.  It’s just as slow and heavy, but channels a bluesier vibe than before.  Guitarist Rob Wrong takes a Sabbathed up blues motif and really gives it his all for almost nine minutes, while a multi-tracked (and occasionally echo filled) Plotkin shows off more of her powerful voice in a style much darker, far more assured than most of her performances on the previous release [2012’s ‘Cauldron of the Wild’].  If she’s not delivering a sixties inflected bluesy cry, she’s going mile for mile with the heavy riff and unleashing some fierce death metal infused growling.   The growling is relatively brief (something which may come as a relief to some), but it’s inclusion seems rather surprising.    With the re-emergence of her clean voice, the track moves into its second phase and something quite brilliant.  The riffs quicken their pace (albeit very slightly) and Mr. Wrong counteracts all vocals with bluesy lead guitar fills.  This is the sound of a band at the top of their game.   ‘Your Corrupt Ways (Sour the Hymn)’ opts for minimum speed/maximum doom throughout.  A simple riff paves the way with a much less crunchy sound than before – the minimalist approach showing an influence from Black Sabbath’s title song.  Once the vocals appear, it takes on more of its own identity with a reasonable vocal range carrying the bulk of the tune.  Multi-tracked voices provide some pleasing harmonies on a chorus, the melodic nature of which really shines against the bluesy backdrop.  While that chorus takes blues into a very dark place, the end results are surprisingly appealing.

The album’s second half is significantly less heavy, though not by any means lighter.  The title cut begins slowly and ominously with spooky noises, before quasi-gothic droning sounds fill almost all available spaces.  With a huge echo, the proportion of the vocals are spoken (any singing, meanwhile, is very understated) while chord patterns move uneasily like the sounds of a dark carnival.  This, in turn, almost acts as lengthy intro to ‘The Shape Truth Takes’, a folk/goth metal hybrid on which the vocals soar in the style of Annie Haslam.  Don’t be fooled into thinking this is somehow sweet and beautiful however; this waltz quickly blooms into a similar spooked out, creepy affair.  The bass grumbles in a disquieted manner, which dirty guitar lines bide their time until eventually breaking forth into a wonderfully doom-laden riff before slunking back into the shadows.  For the climax, the riffs win out and Wrong also gets to put forth a rather fine solo before the last verse – melding the clean vocal and metallic riff in perfect union – which brings things to magnificent close.  This combination of light and shade shows most of Witch Mountain’s chosen styles in one seven minute epic – therefore perfect for the first-time listener.

Finishing off with a cover of Mountain’s ‘Don’t Look Around’, the album pays a great tribute to a band so often overlooked.  Rather than playing it absolutely straight, Witch Mountain add their own touches to the arrangement, each best befitting of their talents.  Plotkin begins with a strong and unaccompanied vocal for the opening line (something the bellowing Leslie West surely would have been incapable), her voice crying into the air.  The band then quickly chimes in via some aggressive  tribal inflected rhythms –  drummer Nate Carson is clearly relishing the chance to play something faster – while fuzzy guitars and organ lend a necessary old-school edge.  Overall – and somewhat expectedly – this cover is markedly heavier than Mountain’s 1971 recording; extra presence of cowbell and much bouncier approach gives it an excellent 90s stoner vibe all round, but it’s easily recognisable.  If you like stoner rock, it’s entirely possible you’ll favour this over the Mountain original…assuming you’ve heard that, of course.  It seems that while lots of 60s and 70s rock bands have endured the years and found new listeners with each passing decade, Mountain have rarely had that good fortune.

It may often be slow and oppressive – occasionally rivalling the UK’s Electric Wizard for all round frivolity – but ‘Mobile of Angels’ is a masterpiece of epic proportions.  It’s never easy listening and certainly takes a while before each of its larger than life pieces fit together, but it is an album with which perseverance really pays off.    If you have no interest in doom metal at its more extreme there’s nothing for you here, but for those to whom slow, heavy and spooky is of utmost importance during a listening experience (and this is certainly an experience) this album should be considered a must have.