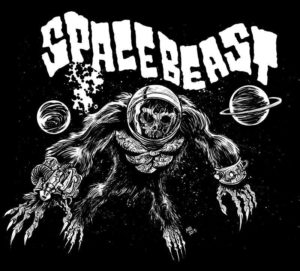 The opening notes of ‘Spaceface’ are not only wondrously heavy, but surprisingly slow; each overdriven chord grinding for what feels like an eternity, the riff lumbering as slowly as the finest doom behemoth should. Guitarist Pat DeMartino has an uncompromising tone, but thanks to a superb production beefing up each crushing chord, he demonstrates a heaviness that many strive for, but only some ever truly achieve. At first, it seems as if the band are going to laboriously grind for the duration, but with a necessary change in key after a couple of minutes, things either start to form more of a melody – relatively speaking – or else, your ears tune in and this oppressively slow and heavy doom sound becomes more ordinary. The heaviness takes on a spooky and almost bluesy scale, and then drummer Darius Lindell explodes with a double bass drum that helps – or rather more forces – DeMartino to pick up the pace. Shifting from the purest doom to a sludgy groove dominated by an even more evil tone, Spacebeast absolutely crush. A lack of vocals means there isn’t an obvious counterpoint to detract from the sludge, but for the doom/sludge purist, this is about as good as it gets.

Taking a cleaner sound, ‘Sad Tummy’ allows bassist Josh Arnold space to step from the knee-deep swamp, and adding a buzzing but warm-ish sound to the melting pot of funereal grinding it’s clear he’s a fine player. In fact, by the halfway point through this six minute trudge, it becomes more obvious that these three guys really jell musically. The combination of deep bass and a descending chord pattern at the outset provides more than enough crunch to ensure those who harbour fascinations with slow extreme metal will absolutely lap up each passing chug – at times, they may even have time to put the kettle on before Spacebeast have changed tack – before Lindell once more powers with a powerhouse of drums, complete with live in the studio sound. The high point of the release comes during the mid section of this track: much at the point where most would include a solo or two, things drop into a bluesy, much quieter refrain. The guitars have an excellent seventies tone, not so much taking their cue from Tony Iommi, but rather more the later, heavier players who in turn took such influence from Sabbath, while the bass feeds back…and a certain level of vibrato means you can hear each string as it bends. Dropping back into a doom-groove hybrid for the fade – a fade here that doesn’t feel entirely natural – the listener is given a small amount of respite before the next monolithic chugfest ensues.

Taking their key traits on an even longer workout, ‘The Cruiser’ begins with the album’s biggest nod to heavy melodies with a big riff that sounds like Corrosion of Conformity jamming with Acid King. The more rhythmic style, once more, allows the drums to lay down some great work, but throughout the first movement, the tightness of the whole unit is much in evidence. At this stage, you’ll not just accept the lack of vocals, but actually wonder where a vocal would have fit anyway, as is such a weighty approach to the style. Groove dominated, the mid section develops into a punchier theme with great use of stops, before a fantastic lead guitar adds a few flourishes. With the grumbling bottom end driving everything forward, this is another point of this record where the bang up production values really add something important. Had this been a lo-fi offering, there are so many parts of Spacebeast’s sludge that might have just been lost in the noise. Naturally, very little changes are made stylistically for the superb ‘Starmaster’ in terms of all round heaviness, but a closer ear unveils a few great touches: the slowest of riffs is punctuated with a welcome eighties horsey noise, with DeMartino bending his strings in a more showy manner; some phasered sounds finally add a little spaciness to the overall sound and the all too brief solo leans towards the eastern – occasionally hinting at both Rainbow’s ‘Stargazer’ and Iron Maiden’s equally epic ‘Powerslave’, but these are mere flourishes as opposed to real homages of any kind. As always with Spacebeast, the tendencies and necessities of pummelling the listener with the largest breeze block riffing proves too tempting… Last up, ‘Walrus Island’ adds psychedelic bass sounds to the band’s repetoir, and hearing Arnold lay down a few thoughtful notes under a blanket of effects results in a brief yet enjoyable interlude before the heaviness returns. Under the guidance of heavy drums, Spacebeast work through what could perhaps be described as a stoner metal jig, with a positively jaunty riff that’s interspersed with clanging sounds of absolute singularity. Accessibility wise, this is the album’s winner – though it’s still on the rather heavy side (understatement). With the final bars creeping slowly around the corner, DeMartino takes a final opportunity to drop in a solo, though the resultant collection of mangled notes is more about style than any obvious tunes or tunings. Offering the most variety of any of Superbeast’s instrumental soundscapes. ‘Walrus Island’ is a very fitting climax to a great disc – it really shows off each of the musicians’ abilities…and not just for their abilities to channel massive riffs.

Spacebeast are three things: slow, tight and perilously heavy. If you’re looking for variety or a little quirk within your riffage, most of the time, you might as well just forget it. Take it at face value for the most enjoyment– in a land where the riff is king, Spacebeast are not only throned, crowned and reigning supreme but also the most unlikely to abdicate. For those who merely think they like it heavy, hearing these five songs (and especially in one sitting) may cause the need for a long lie down. For hardened doom fans, though, Spacebeast – both band and album – should be required listening.