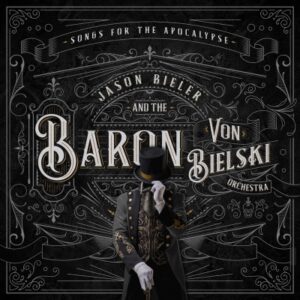 From the point ‘Apology’ kicks in with post-grunge riffs, there’s a sense that this will be a record that’s big on crunch. The dirty tones are immediately impressive, as is the very retro curling vocal, and as those massive sounds begin to collide with Kings X-ish, Beatle-fuelled harmonies, Bieler’s psychedelic tinged hard rock/metal hybrid can be heard in full bloom. With an equal balance of melody and obvious heaviness, the band’s grubby sound is one of the finest riff-heavy offerings in a long time. In fact, you could say this Kings X meets Alice In Chains hybrid is the kind of music that KXM should have made on their last album, and this release might offer some consolation to listeners who’d hoped that would bring something more in keeping with dUg Pinnick’s “day job”. Those multi-tracked vocals will go on to play a huge role in creating ‘Songs For The Apocalypse’s core sound; there are very few solo voices, or clean voices on the whole album. Its hooks and messages are all delivered choir-style, almost as if Bieler has overdosed on Kings X’s fourth album or Alice In Chains’ classic album cut ‘Junkhead’. If you’re not fond of those obvious 90s alternative style influences, there’s a chance you’ll give up on this LP somewhere around the third track. That, obviously would be your own massive loss.

‘Stones Will Fly’ comes a lot closer to sounding like a couple of old Saigon Kick tunes thanks to a much cleaner hard rock sound – the crunchy guitars are particularly impressive here in the way they hark back to that brief period in 1991/2 when hair metal really toughened up, but as with so much of this material, Bieler shows a keenness to take an old sound in new directions. This track focuses heavily on the kind of harmonies you’d expect from Layne Staley and Jerry Cantrell at their peak, but also makes time for a disjointed Mike Garson-esque piano solo and the kind of artiness you wouldn’t expect to find in your average metal performance. In another massive change of mood, ‘Alone In The World’ sounds as if Bieler has taken the guts of an old glam anthem and subjected it to various darkwave synths and a power pop rhythm, creating something else almost worthy of Devin Townsend circa ‘Addicted!’. A clanky mess that’s cool and frustrating in equal measure, it’s the sort of track that’ll have you wondering where in the hell it came from on first listen, grudgingly liking it by the third, and singing along by the fifth. With more fuzz than anything else, it certainly won’t appeal to listeners who value easy melodies over everything else and, just perhaps, Bieler’s decision to have Jeff Scott Soto – one of melodic rock/AOR’s most celebrated talents – sing the refrain and then disguise his voice under distortion was a choice made specifically to wind up the unadventurous, but somewhere beneath the noise, more patient listeners will eventually uncover a tune that’s as catchy as hell. …And anything that rattles the AOR purists is automatically cool.

‘Crab Claw Dan’ twists things even more, when a weird art rock vibe meets an end of the pier fascination. With a weird waltzing time signature, echoing vocals and various keyboard sounds that replicate a tuba, it’s got a kitchen sink vibe from the get go. The chorus brings in various vaguely psych influenced harmonies that bring the track in line with the bulk of the record but, in the main, it plays more like an oddity you might find on a Devin Townsend album. With that in mind, it’s sort of fitting that Townsend would guest on this album and he contributes a manic prog rock solo to ‘Bring Out Your Dead’, which stands a real highlight on a record already brimming with great material. Showcasing a particularly brave fusion sound, the number works around a heavily downtuned bass sound (played by Megadeth’s David Ellefson, it more than suggests an influence from Korn’s Fieldy) and a massively crunchy guitar part. A more melodic element is supplied by rich harmony vocals falling between King’s X and The Hollies, and its contrast between the heavy and melodic acts very much as a musical core for the whole elpee. The riffs chug with intent more than ever here, and although this blend of grungy goodness and harmonious retro cool sounds as if it’s been pulled straight from 1995, it’s still sounds remarkably fresh at the time of release. Put simply – this is incredible; a track deserving of a broad audience.

‘Anthem For Losers’ lightens the mood with an arrangement that fuses power pop with an AOR slant. Presumably this is where Bieler thinks the Jellyfish comparisons apply; it doesn’t sound anything like Jellyfish in their full pomp, but the sugary vocal harmonies, stabbed pianos and shimmering chords definitely call back to the 90s and bands like Neve. It’s good to hear Bieler and his assembled musicians branching out and although this number’s broader melodies give this album something of a musical cuckoo, it’s a great track. Elsewhere, ‘Born of The Sun’ mixes eastern melodies with an alternative rock swagger resulting in a progressive metal track that’s huge on atmosphere and ‘Very Fine People’ winds everything down with a semi-acoustic ballad that takes a swipe at the US’s right wing uprising facilitated by a fascist sympathising president. In one of the album’s clean vocals and clearest voices, the performer calls out a nation’s undesirables. Its justifiably angry lyric contrasts a tune that sounds so much like an old Mr. Big or XYZ ballad; at the time of Bieler’s writing, it would have seemed pointed, but with its release into the world coming just two weeks after that president incited a riot, it’s a recording that seems even more important.

Released at the peak of the twenty first century vinyl boom, at fifteen tracks and approximately sixty minutes, this album is too long. However, that’s pretty much the only complaint; it’s a record with plenty of variety and a sound that really pushes the boundaries of melodic rock (at least by its basic definition). Even though so much of the material sounds unashamedly retro, Bieler’s talents for juxtaposing the heavy with the melodic and the traditional with the off-beat always keeps things interesting. This is the kind of record that has the potential to awaken similar feelings to when you first heard Freak Kitchen’s ‘Spanking Hour’ or Jorn Lande’s Vagabond project. Every so often, there needs to be a release that dares to challenge the melodic rock fanbase and this is definitely one of those albums. A highly recommended listen.