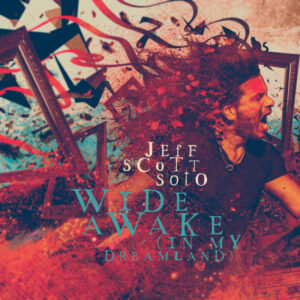 Jeff’s 2020 solo album ‘Wide Awake In My Dreamland’ wastes no time when reacquainting listeners with a his big, chorus-driven style. In fact, the way ‘Someone To Love’ opens the album by delivering an echoing melody of an upcoming hook, you instantly know you’re in safe hands. …And indeed, as the track motors along with a hard and melodic riff that calls back to early Talisman – even echoing a little classic Thin Lizzy in its extensive use of twin lead guitars – it takes all of a minute or so before it feels like a track you’ve always known. It’s musically solid to say the least, and chorus-wise, fans are quickly treated to a huge and harmonious affair that’s fully loaded with a classic melody, tailor made for all lovers of things from the rockier end of the AOR scale. Perhaps more impressive is how well Jeff’s voice has weathered the passing decades. On this track, he could easily pass for the JSS of the 90s; it really is as if almost no time has passed.

From then on, ‘Wide Awake…’ plays like a musical CV for most of Soto’s previous career highlights. You’ll find tracks that could sit alongside the melodic rock gold of his previous albums for Frontiers, a couple of nods to Talisman, a touch of something funkier and even a couple of heavier moments that have a bombast that calls right back to the Malmsteen days. In terms of that heavy side, ‘Desperate’ provides a highlight with a stomping rhythm and dark, chugging riff that sounds like a cross between an Alcatrazz deep cut and a melodic metal band channelling bits of Rainbow’s ‘Stargazer’. This allows guitarist Fabrizio Sgattoni plenty of opportunity to throw his weight around – there’s some cracking lead work to be heard, but unlike Malmsteen, he never sets out to upstage the vocalist, and hitting upon some lower registers and a moody melody, Soto sounds superb throughout. The mid-paced chug of the title track allows Fabrizio to drop in a couple of horsey squeals and really grapple the kind of heavy riff that would be at home on a SOTO album, while Jeff moves through a whole range of vocal moods. The pre-chorus demonstrates a near-theatrical roar; extra harmonies on the main hook brings a welcome melodicism and the verses – rather at odds with the rest – bring a soulful croon where Soto sounds completely at ease. Although the metal-oriented riff mightn’t always sit well with those hoping for more of an AOR vibe, the performances are almost flawless. Had this been released in 1996, older fans would have bleated about Jeff trying to go alternative. To be fair, some of them still will, failing to recognise that – beyond a dirtier, slight downtune on the guitar – there’s some genuinely classic rock being explored here. Maybe it’s time for those guys to crank the volume and stop being so uptight.

For those looking for something softer, however, ‘Without You’ will be an instant favourite. With his voice set against a strident piano, Soto sounds very confident (obviously knowing his voice is as good as it ever was), but this is a truly collaborative effort between the singer and his band. So many AOR performers would settle for a straight ballad of the Survivor variety but this offers something much grander, in that the melodic piano lines are quickly joined by a very theatrical melody, multi-tracked guitars and a real sense of pomp. When hitting the louder notes, Jeff barely even wavers and with that easily recognisable tone weaving in and out of some brilliantly bombastic riffs (including one that appears to have been lifted straight from Jeff Wayne’s ‘The Spirit of Man’), it’s a track that really holds the listener’s attention. A much purer melodic rock sound drives the power ballad ‘Between The Lines’ which sounds like a heavier take on an old Dianne Warren tune at first, before exploding into a superb rocker where Soto delivers a timeless vocal. Admittedly, it’s the kind of thing you’ve heard from Jeff many times before, but it never gets old and with a solid vocal performance augmented by more fine guitar work, it’s a strong addition to the Soto legacy despite any over-familiar traits.

Dropping into a funkier rhythm, Jeff revisits his ‘Love Parade’ era sound on ‘Mystified’, allowing Sgattoni plenty of opportunity to latch onto a groove-laden guitar riff while Soto delivers a huge, booming vocal throughout. For the AOR fans, another big chorus will more than satisfy, but for those hankering after a little more complexity, Fabrizio’s busy solo underscored by a dirty bass sound worthy of the great (and sadly missed) Marcel Jacob might just be this track’s finest feature. For classic, punchy AOR, listeners should head straight for ‘Lesson of Love’ where a huge 80s riff leads into something that sounds like Jeff’s own harder take on sounds created by Lionville and a newer breed of Swedish stars. Although the vocals and harmonies are firmly in the driving seat here, it’s the way simple piano chords pierce through that really makes this track. Of course, it doesn’t reinvent the wheel, but between a strong vocal performance and a band in great shape, it fills a great four minutes.

Elsewhere, ‘Paper Wings’ flaunts a massive, swaggering riff and equally massive chorus that falls somewhere between early Talisman and Joe Lynn Turner era Rainbow; ‘Love Will Find A Way’ revisits later Talisman fare but applies a much bigger AOR chorus and ‘Living In A Dream’ opts for full throttle Euro style melodic metal, where Soto and Sgattoni’s talents really compliment each other. Issued as a digital single ahead of the album, ‘Love’s Blind’ gives fans something that’s fairly representative of this record’s best moments, as Jeff launches into a the kind of melodic rock chorus that sounds like an old Takara throwback, while the rhythm section settle upon a punchy style that allows for a great send off. In many ways, it’s by-numbers melodic rock, but in the hands of a talented band, it still has a huge entertainment value and will certainly appeal to Soto’s devoted fanbase.

With a few instant classics and absolutely no filler, ‘Wide Awake’ is another corker from Soto – and possibly his best solo disc since 2005’s ‘Prism’. It would have been a near essential purchase as a stand-alone disc, but since initial copies include a disc’s worth of live recordings taken Jeff’s set from the Frontiers Rock Festival in 2019 (previously issued as a digital release as ‘Loud & Live In Milan’), it becomes a genuine bargain. This is a release to be enjoyed by both casual admirers and long-time fans. In fact, ‘Wide Awake (In My Dreamland)’ joins FM’s ‘Synchronized’ and Lionville’s ‘Magic Is Alive’ as one of 2020’s unmissable AOR/melodic rock releases.