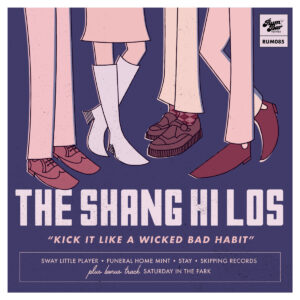 The Shang Hi Los is a band that brings together the talents of various musical stalwarts of the Boston music scene. Formed in 2019 by Dan Kopko from Watts and Jen D’Angora (The Downbeat 5) to expressly record poppier material, they later enlisted Lee Harrington from The Neighborhoods on bass and Lost Cowboys drummer Chuck Ferreira. With the ultimate team of friends in place, the quartet set about raising the bar for good old fashioned power pop.

Nothing seemed to happen instantly, though: before the new band gained any kind of obvious traction, The Neighborhoods released a full length LP (‘Last Known Address’) and Watts released a couple of digital singles. In fact, it wasn’t until the last quarter of 2020 – a troubled year for everyone – that The Shang Hi-Los made their first mark on the world at large, when the video for their debut single ‘Sway Little Player’ appeared on YouTube. It would take another four months for their debut EP to finally make it into the wild. This suggests a lot of work went into streamlining the material, making sure their first release put best foot forward. And indeed, ‘Kick It Like A Wicked Bad Habit’ is the kind of disc that’s broad in appeal for all lovers of tough rock-pop and classic power pop sounds alike. More importantly, its selection of massive hooks and harmonies can still be enjoyed by listeners who have no prior knowledge of the band’s history.

The already familiar ‘Sway Little Player’ is given the job of kicking things off, and its a job done brilliantly. It makes the obvious opener in that it introduces the band gradually: first, the drums set up a hefty beat; then, Kopko’s guitar throws out a ringing riff that harks back to 60s juke box classics, before and the male and female vocals are subsequently showcased separately in a very retro call and response style. Kopko’s scratchy voice are given a fine contrast by D’Angora’s louder trill and when they finally harmonise on the chorus, you realise this is a very natural match. By the time that chorus hits, it sounds like one of the feel-good tracks of the era: a little Flamin’ Groovies, a lot like buried treasure from Holly & The Italians, this is power pop gold, often sounding like something you’ve always known.

Of a similarly high quality, ‘Skipping Records’ seems more like an old Watts tune at the outset with its bar-room swagger and Stones-y cool, but quickly blooms into something much slicker. Once Jen begins to harmonise and Lee steps up with a fuller bass part, this song grows into a fine, fine power pop workout where The Hi-Lo’s sound tighter than ever. Its simple hook of “Skipping record, skipping record stuck on repeat” is clearly designed to get stuck on repeat once it hits your internal jukebox; the shiner pop elements cutting through show a band that’s greater than the sum of its parts and lush harmonies that sound as if they’re ready to slide into a Cockney Rebel-esque “ooh la la la” at any second further accentuate this band’s shamelessly retro charm. …And if you’re somehow worried things are getting too commercial, Dan’s also on hand with a ragged lead guitar break where loud careening notes threaten to derail the bubblegum elements in a heartbeat, but understanding the importance of The Shang Hi-Los commitment to songs over bombast, he pulls back just in time…but not before you’ve been reminded that this is very much part of the growing Watts legacy.

Dropping into to something rockier, ‘Funeral Home Mint’ shows all the signs of having Dan Kopko in the driving seat. Fusing power pop harmonies with garage rock riffs, its punchy beats and rockin’ grooves are only a sidestep from Watts in full flow, but every care has been taken to ensure this still sounds like a collaborative effort with Jen offering a forceful, curly vocal and Lee punching through on the bass wherever possible. Chorus-wise, it’s the EP’s weak link, but it could be argued that the riff is more important – and when played loudly, it’s a track that still sounds great; it’s just outdone by the rest of the material. Further exploring a world of retro sounds, ‘Stay’ offers a mid tempo workout that pushes Jen’s vocal further into the spotlight. It’s much lighter than most of the band’s usual stock, but even when dialling things back, it’s easy to hear their love of old power pop sides coming through at every turn. Far more of a slow burner, this track doesn’t really hit the mark until the final moments. Sure, the verse suggests a strong melody is building towards something, but it’s not immediately clear what. The chorus comes with a jangly loveliness, but again, there’s still a feeling that something is being held back. Finally, on the last airing of a hook that sounds better with each spin, the otherwise silent Kopko counters the main melody with some catchy as hell “do do dooo”s and by the time The Shang Hi-Los are done, this all sounds pretty timeless: you’d be hard pressed to tell whether this was recorded in 2020 or a lost gem from 1978.

Joining the four self-penned numbers, The Shang Hi-Los bravely tackle the Chicago classic ‘Saturday In The Park’. “Bravely” seems to be the optimum adverb here since nobody in the band actually plays the piano and, obviously, the original cut relied very heavily on a brilliant stabbed melody from pianist Robert Lamm. Nevertheless, the track turns out rather well with a compliment of chopping guitars and heavy bass anchoring everything throughout. Kopko’s vocals are a little scratchy – something not helped by decades of being used to Chicago’s all round slickness – but when joined in harmony by Jen, the melody works just fine. Given a little time to adjust, it becomes much more obvious that beyond cranking the guitars, they’ve chosen to play it as straight as possible. The real stars throughout this take are the rhythm section: Ferreira makes the best use of a live drum sound and Harrington works a really muscular bass riff, demonstrating the Hi-Los are capable of delivering a genuine punch. This’ll never replace Chicago’s masterful 1972 recording in your affections, of course, but it’s nice to have a fun alternative.

…And that’s it. Five songs and out. It would’ve been nice to have had a full length release, but The Shang Hi-Los have certainly delivered quality over quantity here, exuding a love for the style at almost every step along the way. The kind of side project that deserves to have longevity – if not via future recordings, then certainly in your CD player or visits to streaming services – ‘Kick It Like A Wicked Bad Habit’ was a long time coming, but it was definitely worth the wait.