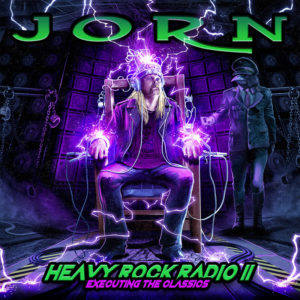 That said, there are few things on this album genuinely worth hearing. With odds of about a thousand to one against, one of the decent tracks is a reworking of Bob Dylan’s ‘Quinn The Eskimo (The Mighty Quinn)’. A track familiar to most in the guise of a 60s hit for Manfred Mann, Jorn has opted for something similar to the later Manfred Mann’s Earth Band reworking (as found on 1976’s ‘Watch’). Naturally, Jorn chooses to sidestep the pomp and more obvious melodies of that recording in favour of sheer bombast, but somehow, the track comes out relatively unscathed. Much of this is down to a solid backing band. Both Tore Moren and Jgor Gianola seem to be having fun with the guitar riff that’s given an extra dimension from a wah-wah pedal, whilst the ever present Alessandro del Vecchio throws out swathes of organ. Both of these factors would make this cover pretty much stand, but it’s the fact that everyone goes the extra mile during the instrumental break with a funky interlude and – unexpectedly – a couple of passages of Chris Thompson’s ‘Thunderchild’ from ‘War of The Worlds’ that makes it stand out.

Also reasonable is a take on Foreigner’s ‘Night Life’ (from the classic ‘Foreigner 4’) which actually stands up to a bit of extra crunch. Jorn and band take an old AOR classic and re-work it in the mould of much more robust hard rock akin to Animal Drive. The result sounds like a deep album cut from ‘Slaves & Masters’ era Deep Purple, or even King Kobra on one of their better days. The session band are in good shape and Jorn more than hold his own. If you’re a fan, there’s every chance you’ll love this. Elsewhere, an old westcoast pop/rock classic ‘I Do Believe In You’ (originally recorded by Pages and covered by Frank Stallone) sort of works despite itself. Given that the original (and by turns, the almost verbatim Stallone cover from ’82) rely heavily on pop harmonies and stabbed pianos, its a surprise how well the main riff works when transposed to guitar. It’ll never replace the better known versions in your affections, but it works well enough and at least Lande sounds like he’s having a good time.

A number entitled ‘Love’ – seemingly a new commission for the album – is very sympathetic to Jorn’s preferred style, coming across like a heavier, Scandinavian Whitesnake meeting with Frontiers label-mates Animal Drive. It’s chorus is somewhat simplistic, but the mid-paced but very meaty style gives Lande plenty of room to curl his booming voice. The addition of a cracking guitar solo and a brief mood change towards the end suggest more than a band on autopilot. While you’ll have heard similar from a hundred classic rock bands and melodic metal acts, this recording still conveys confidence and charm. Given how good this is for the style, it’s a pity Jorn hadn’t more decent original material up his sleeve.

Unfortunately, the bulk of the rest of the album shows nowhere near as much spirit. Jorn literally phones in a version of Dio’s ‘Mystery’ as if he’s fronting a covers band at a cheap club night, before taking Peter Gabriel’s ‘The Rhythm of the Heat’ and delivering it as if he’d just found it on a Masterplan or Helloween album. In some ways, the fact that it’s pretty much unrecognisable as the old Peter Gabriel song (even if you’re a fan) might make it interesting in and of itself, but it doesn’t change the fact that from a purely listening perspective, it doesn’t rate as much more than four minutes of bog-standard Euro metal. Peter Gabriel certainly deserved better than that. Still, even that is better than a metal version of Don Henley’s ‘New York Minute’. A once lovely adult pop ditty, Jorn re-imagines a late 80s classic as a heavy handed metal dirge that plods along while he belts his lungs in a manner of a work a day hard rock blowhard; all force and no melody. NOBODY NEEDS TO HEAR THIS EVER. Jorn obviously learnt nothing after destroying ‘Hotel California’ on volume one of ‘Heavy Rock Radio’ back in 2016.

Just when you think this album has surely hit rock bottom, Lande hits you with a totally misguided romp through The Searchers’ pop gem ‘Needles and Pins'(-ah), reworked as a melodic metal stomper that sounds like a band taking the piss. The guitar playing is fine, but in all honesty, the solid riffs that have been crafted would’ve been better saved for something else. …And they really could’ve been too, since the only thing here that’s recognisable as the old 60s hit is the vocal melody which, predictably, Jorn chunders out at full volume. It would be funny if it weren’t so tragic. There was a time when this guy was considered a serious vocal talent in the metal stakes and yet, here, he sounds as if he’s set to open 2020 as a metal cabaret act.

Moving on swiftly, then, the Deep Purple track ‘Bad Attitude’ is a fine fit for Lande as he takes an old Gillan vocal and puts it through its paces while his band take what’s a very obvious Jorn-friendly riff, beef it up and give this album a solid cover, even if it’s all a little like experiencing a tribute band as opposed to something with any real imaginative flair. Bryan Adams’s ‘Lonely Nights’, meanwhile, is more of a mixed bag. It opens with really pleasing ringing guitar tone, leading into a classic AOR riff. As is the case on about half of this album, the band are in fine shape. Unfortunately, any goodwill gets swept away with the vocal and the show is well and truly over once Lande begins to sing. In the past, he’s been considered the true successor to the great Ronnie James Dio, but one listen to this and you’d have to wonder how…and, indeed, why. While a few tracks on ‘HRR2’ show he’s still capable of hitting the mark, on this number he takes each line and growls like a man without any restraint or training. The fact that the performance has even been subjected to filters (which don’t actually disguise the rough delivery) might even lead to speculation that his voice is actually on the way to being shot. On the plus side, the track includes a nice twin lead guitar sound capitalising on great melody, it’s such a shame that any promise is ruined by Jorn’s insistence on gargling like a cut-price Meat Loaf. A little better, Russ Ballard’s ‘Winning’ (as covered by Santana in the 80s) is presented in a predictably heavy guise, but also carries a vaguely celtic flair. This results in a hard rock romp through something that sounds like a heavy version of Chris Thompson/John Farnham’s ‘You’re The Voice’, although nowhere near as good. Again, the vocal filters will divide opinion and the end results are a far cry from Jorn’s early days as a great and distinctive singer. Although far from the worst thing on this album, it’s hard to imagine anyone gleaning any genuine long-term enjoyment from it.

Covers albums can be superb things if the artist approaches interesting material with a sense of invention. However, aside from the surprisingly good ‘Mighty Quinn’, you’ll find almost nothing of the kind here. Whether or not that title was meant as irony, Lande has, indeed, executed a few classics and it is, perhaps, time for the Henley estate to issue a cease and desist notice on any future Don/Eagles covers for the sake of the world at large. In truth, although we can breathe a sigh of relief that this album isn’t quite as terrible as it could have been, it’s still only going to be of real appeal to Lande’s biggest and most forgiving fans.