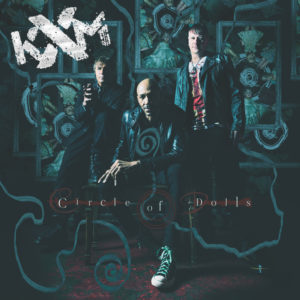 In the King’s X framework, Pinnick’s huge bass sound and vocal wail sound even better thanks to the all important contrast from guitarist Ty Tabor’s psychedelic and poppier textures. As frontman of this sometimes very different trio, Pinnick finds himself without such a sympathetic foil, and so, the bulk of the record finds dUg and George with amps cranked riffing like hell. If you love heaviness to come at the expense of almost everything else, chances are you’ll love all of it exactly for what it is, but for anyone approaching this expecting a hugely retro feel and some interesting variations on the players’ day jobs, it’s a record that will often be in danger of coming up short.

Not wanting to break listeners in gently, ‘War of Words’ open with a barrage of guitar sounds heavy on the effects, as if heard from the end of a telephone. This, obviously, leads the listener to thinking everything will go boom in a big way, which it inevitably does. The main riff is superb, like a heavier take on an old Dokken tune which, backed by a fantastic drum part, kicks the album off with a real intent. By the time Lynch drops into a frantic solo and Luzier reaches for the bass drum pedals, it’s almost like hearing a heavy Lynch Mob track reworked by Stone Sour. With a great sound boosted by Pinnick’s bass, this is KXM at their most aggressive – and even a full on wail from dUg himself can’t kill the vibe they’ve created.

From then on, very few of the heavier tracks reach such a high standard. ‘Mind Swamp’ retains the heaviness, but has a far less interesting, almost grungy riff. It’s fine if you like that sort of thing…but if that’s your bag, you’ll find a lot of better examples out there. The riff might have worked better if there were anything resembling a song built around it, but beyond a quieter verse where dUg’s bass pushes through with a great sound, there’s little here to get excited about. The chorus absolutely kills everything with pointless repetition and a genuinely horrible vocal…all of which is made worse by a nasty brickwalled production sound. Likewise ‘Big As The Sun’ starts with an interesting funk oriented groove – something very much driven by Luzier – but upon reaching the chorus, everything sounds like a near impenetrable wall of guitars, made worse by the really hard edged, distorted sound. That said, Pinnick is in great shape vocally and a few harmonies tip the hat to King’s X at their best but, unfortunately, the good moments are fleeting.

Thankfully, there are a couple of softer numbers to break things up and it’s these slightly more reflective tunes that stop this album being a general duffer. ‘Wide Awake’ begins with a huge bass that’s instantly recognisable as Pinnick’s and, indeed, the verse of this particular track could easily slot alongside a couple of bits from King’s X’s ‘Manic Moonlight’ album from the late 90s. Realising the potential in this layered, slightly trippy sound, dUg finds a little of his older, soulful voice…and it’s great. The inclusion of a fantastically bluesy solo from Lynch over a backdrop that sounds like an updating of Rainbow’s ‘Stargazer’ also suggests that KXM can really hit the mark when they want to, so it’s all the more frustrating that this album doesn’t settle for this kind of atmospheric mood more often. ‘Time Flies’ brings some solid, driving rock music which often sounds like the best King’s X song you’ve never heard, full of harmonies lurking beneath a huge bass and featuring a simple but effective chorus. Luzier’s drum work is always sympathetic to Pinnick’s sense of groove and Lynch, bizarrely sounds as if he’s channelling Alex Lifeson on the verse, before ushering in some heavier sounds for the chorus. His choice of solo is unexpected, too, mixing some tasteful rock chops with the occasional jazz fusion flourish. It very much shows how working with different musicians can bring out some different ideas. This is a seriously great track; it’s one that ultimately doesn’t as much show the potential greatness within KXM, but rather more highlight the shortcomings of most of the rest of the LP. Between a hazy 60s vibe in places, another classic King’s X styled verse and a cheeky nod to AC/DC’s ‘For Those About To Rock’ during the intro, ‘Twice’ is a genuine melting pot of musical ideas. With everything held together by dUg’s voice and bass, it’s another number aimed squarely at the King’s X fan rather than the Dokken devotee, but it moves nicely and thankfully it’s delivered with a rather more pleasing end mix too – for once, there’s just there’s enough space between the instruments to let the song breathe. For the King’s X fan, this trilogy of great tracks is pretty much all you’ll need.

Elsewhere, things aren’t quite as appealing, unfortunately. ‘Cold Sweats’ shifts gears into a full on funk that – at least individually – shows off Luzier and Lynch in good form. However, once the off-kilter groove is applied to various vocals that sound like they’re intended for a different song and a heavy chorus that never rises beyond sounding like “King’s X Castoff #14”, there’s nothing to get excited about in the long term. The title track brings more of a melodic edge and shows more potential in this musical union as the trio hit upon another slightly funk oriented metal groove that actually sounds like Lynch Mob joined by Pinnick’s hard, driving bass sound. Fans of Kings X’s dirtier ‘Dogman’ album will almost certainly find something to like within the music. At the point you start to think there’ll be something else to add to the few stand out tracks, though, it becomes depressingly obvious that the band forgot to write anything like a half-memorable hook to go with the tune. Where you’d hope for something along the lines of classic Pinnick, the melody drops into a muddy psychedelic noise with the vocals buried somewhere under Lynch’s heavy guitar sound. It’s very much the kind of track you’d spin twice and then forget about…forever.

Somewhere between the great and merely okay, ‘A Day Without Me’ also scales back some of the heaviness in and uncovers a world of swampy blues that has Pinnick’s distinctive talents in the driving seat. His fat bass tones come straight from a couple of King’s X classics, which combined with a soulful vocal and some bluesy dobro-ish sounds from Lynch really sets the mood nicely. Further into the track, there’s a superb heavy groove over which drops in a tasteful but meaty solo. Unfortunately, like far too much of KXM’s work, these enjoyable elements are joined by a heavy as hell chorus that completely derails everything. The heaviness isn’t the real problem on this particular track; the main issue stems from the awful production values where everything just seems to be pushed in red giving a distorted end sound. Combine that with Pinnick wailing endlessly and something with potential just becomes another unnecessarily tough listen.

Despite the obvious talent within the band, the bulk of this album just seems to a little too heavy for the sake of it, to the point of becoming a bit tiring in places. Undoubtedly, the Frontiers Records apologists will blame the member of KoЯn for any – or all – of KMX’s and this album’s shortcomings…and wrongly, too, since Luzier’s drumming is actually pretty much perfect for the unsubtle job in hand. Fact is, despite having so much potential, so much of ‘Circle of Dolls’ just sounds like three guys trying to outplay each other constantly, which combined with excessive distortion just doesn’t lend itself to anything with any real longevity. An album to approach with caution.