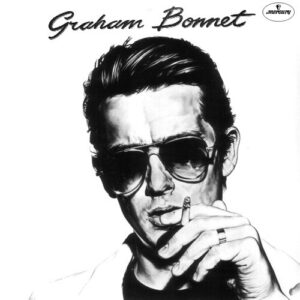 The first of those albums (and arguably the better of a hit and miss pair), begins with a cover of Dylan’s ‘It’s All Over Now, Baby Blue’. As Bonnet starts to sing in a fairly high register with an acoustic backing, at first, it sounds like a really misjudged attempt at a classic. However, once you’ve tuned into Bonnet’s vocal style and the rest of the band have chimed in, it has some definite appeal. The drums are a little lightweight, but there are a couple of other elements which make up for that. Future Whitesnake man Micky Moody is on hand with a few decent slide guitar lines and also the use of a talkbox – at this point in time very popular thanks to Peter Frampton – and by the time the band hit their stride, the arrangement has a fairly enjoyable Faces-esque quality. It kind of goes without saying that it lacks the class of the original or the sassiness of The Byrds’ 1965 rendition, but there are far worse Dylan covers out there. [Released as a single, Graham’s recording became a #5 hit in Australia].

Following that comes something truly nasty. The world really never needed to hear Bonnet wailing his way through Carole King’s ‘Will You Still Love Me Tomorrow?’. As a questioning song sang from the female perspective it’s rather heartfelt, it loses all of its brilliance once it changes gender. Factor in a gaggle of female backing vocals who sound like they are adding their harmonies to a 1970s variety performance on TV, and the whole thing becomes a cloying cheese-fest which not even Micky Moody and Pip Williams’ guitar playing is able to save. The slightly hard rock air of ‘Wino Song’ (the album’s only Bonnet-penned number) thankfully offers something better. The twin guitars of Williams and Moody take on a bar-room chug, which underpinned by a mid-paced stomp from Mike Giles on the drums works just fine. While the production isn’t super, it’s a pleasure to hear Bonnet’s more natural rock sounding vocal. While he’d still struggle to take on the best at this time, his pub-singer style has a certain charm. In an attempt to stop the track being too ordinary, Tony Hymas (prior to becoming a member of Jeff Beck’s regular band) adds a few keyboard lines, ranging from ugly 70s synths to a quirky instrumental break in an accordion style. Overall, it’s rather entertaining, even if it doesn’t stretch the bounds of originality.

A take on the Hall & Oates number ‘Goodnight and Goodmorning’ [sic] is musically very smooth. Bonnet’s band takes on the AM radio style and delivers it extremely well. The acoustic guitars lay a solid foundation, overlaid by Hymas’s synths and with everything in place, everyone sounds great. Naturally, Bonnet’s slightly ragged delivery isn’t a match for Daryl and John alone, so there’s a choir of male and female voices on hand to flesh things out. In places, they sound slightly treated and unnatural, but that adds to the unashamed seventies-ness of the whole affair. Presumably, the final arrangement was left in the hands of producer Pip Williams – and it’s fair to say he does a top job. The addition of a mandolin solo adds a degree of sophistication, but it’s the string arrangement dominating the second half which makes it really work. The violins are fine enough, but the low notes from the jagged sounding cellos are superb. With all of that in mind, this might just be one of the most over looked cover tunes ever.

The Ron Davies penned ‘It Ain’t Easy’ – familiar to all from an earlier Bowie recording – also fares quite well. Bonnet’s band of AM radio rock-poppers obviously don’t give it the huge send off as per the Spiders From Mars, but between an assured lead vocal, some enormous backing vocals and a tight band who obviously seem keen to make it their own, it comes across more like the Stones‘ ‘Gimme Shelter’ and stands up against the odds. Dropping back into the world of singer-songwriter pop, ‘Danny’ works an almost soft rock ‘n’ roll style that would certainly have been hit fodder in the hands of Mud and Showaddywaddy a couple of years earlier. It certainly has maximum cheese factor, but the nicely arranged horns, steady rhythm and an assured lead are all great providing you like the style. If you’ve somehow backtracked here from Bonnet’s 80s work, it might cause a quizzical eyebrow or curled lip, though, as along with ‘Sunday 16’ – a soft, piano led reggae pop workout that never really leaves a lasting impression – it probably should be filed under “of its time”.

Very much making the album feel like it never wants to reach full potential, Ledbelly’s blues standard ‘Rock Island Line’ takes the shape of a faintly embarrassing stompy hoedown and is designed with the skip button in mind and a cover Al Green’s ‘Tired of Being Alone’ is uninteresting bordering on forgettable, but luckily the album has a final ace up its sleeve… The closing number ‘Soul Seeker’ once again allows Bonnet to tap into his harder rock style, his natural timbre sounding like it was meant to compliment the retro rock music on show here. The choir of male voices rounding out the chorus manage to be effective despite their simplicity, but its Williams and Moody’s guitar riffs which offer the number’s best moments. They have more than a hint of the earliest Whitesnake recordings about them, thanks in no small part solid sounding slide work. [Maybe this track was responsible Ritchie Blackmore’s choosing Bonnet to replace Ronnie James Dio in 1979? Very little recorded by Bonnet on his two solo releases prior to his appointment in Rainbow even comes close to suggesting he would be a front-runner for that job…]

After years of being almost impossible to find, ‘Graham Bonnet’ received a long overdue UK CD release in 2016 when HNE Recordings released the album as a double set with follow up ‘No Bad Habits’, which also added a selection of bonus tracks. This release automatically had the edge on the Japanese CD from 2011 in that the main album wasn’t sourced from a needle drop, but the addition of those bonus tracks actually raised the overall quality.

The original b-side of ‘It’s All Over Now Baby Blue’, ‘Heroes On Picture My Wall’ is a fun tribute to teenagers’ adulation of pop stars. Musically, it ventures towards the poppier aspects of the main album and in doing so taps into some reasonably solid 70s pop grooves. The use of a vocal choir makes a big chorus really come to life and the feel good nature of the track sounds like something that should have been used for the end credits of a light comedy film. Maybe Graham’s team were inspired by Three For All? Whatever, the use of electric violin in place of an expected lead guitar and a very memorable melody make for an enjoyable listen, despite sounding very much of its time. Unfortunately, a couple of unreleased tracks from 1976 and ’77 don’t fare anywhere near as well: ‘Who Am I’ is the worst kind of light entertainment ballad worthy of Barry Manilow and ‘The Loving Touch’ (a duet with Vicky Silva) settles for a similar early evening, 70s variety show hell, sounding not unlike something created for musical theatre.

Moving swiftly on, two demo recordings of non-album tracks, along with a demo of ‘It Ain’t Easy’, lend a reasonable insight into the album’s early sessions. These unused tracks comprise of two covers: ‘You’ve Lost That Loving Feeling’ is played pretty straight, but allows Graham to stretch his voice. It’s a commendable effort, but chances are you don’t really need to hear another cover of this well worn classic. Far more interesting is the cover of Nina Simone’s ‘Do What You Gotta Do’. Although abandoned at the demo stage, this recording already represents a good time mix of northern soul sounds and light disco, almost pre-figuring the big single from Bonnet’s follow up album. Along with the ‘Heroes’ b-side, you’ll be glad these bonus cuts were unearthed and with the disc fleshed out by a 7” edit of ‘Goodnight And Goodmorning’, this is about as complete an edition of ‘Graham Bonnet’ the world will ever have.

With or without bonus tracks, ‘Graham Bonnet’ could still only ever be described as a patchy effort overall, but the best parts of this recording definitely have their own charm. If you’re a long standing fan, it’s worth hearing for the Dylan cover, the Daryl & John song, ‘Wino Song’, and the Bowie related moment. Back in 1977, it never actually got much attention in Britain, but became a massive smash in Australia, eventually selling enough copies to earn Bonnet a gold disc. In many ways, though, that was enough: the lad from Skegness had re-found an audience and his career as a full time recording artist had taken an important step forward.