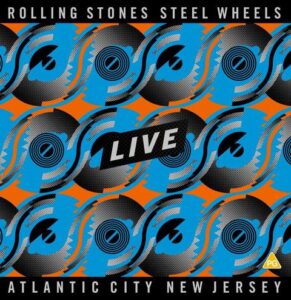 The Atlantic City show actually aired on pay-per-view TV in the US, but a welcome blu ray release in September 2020 marks its first worldwide availability.  Even in a world that isn’t short on Rolling Stones gigs on DVD and blu ray, it’s a more than welcome addition to the catalogue.   It’s greatness is obvious from the get-go, too:  as the house lights rise, with Keef and Ron launching into the opening riff from ‘Start Me Up’, Jagger struts into centre stage and the Stones are clearly up for it as much as their audience.  It would be tempting to call the set up “no frills” in a visual sense – there are few special effects save for a few gas jets and the lighting is minimal but very effective – but the show immediately manages to get across its big scale ambition by placing the band on one of the largest stagex you’ve ever seen.  The layout takes what would normally be considered a massive stage by the day’s standards and extending it with various catwalks.  Jagger uses these extensively throughout, but obviously relishes having so much room to chicken strut during ‘Bitch’, which sounds absolutely fabulous with a some tight horns punching out the legendary riff.

‘Sad Sad Sad’, the first of the then brand new numbers, already sounds like a classic. Mick takes up rhythm guitar which fleshes out the sound admirably.  We’re now witnessing three guitarists who appear to be playing three different things, but somehow – and in a way that only seems to be known to The Stones themselves – it works brilliantly.  It gets even better once the legendary Bobby Keys gets a moment in the spotlight, as his sax breaks are fantastic.  For a track equally as fresh, ‘Terrifying’ comes across just as confidently and showcases Bill Wyman as a very muscular bassist (something that isn’t quite as obvious with the brittle 80s production of the studio record).  The better known ‘Rock And A Hard Place’, meanwhile, sounds like an equal match for ‘Start Me Up’ with its massive riff and sass.  This is one of the tracks where the blu ray’s sound mix comes into its own: the riffs move between the speakers; the brassy backing vocals occupy a huge space over in the left and despite his inability to stay still for more than four seconds at any one time, Mick’s lead vocals remain fairly central, giving a well rounded sound.  The arrival of ‘Mixed Emotions’ doesn’t really change the mood, but maybe that’s the point; with the track appearing straight after ‘Hard Place’ and almost an hour into what’s clearly one of the great Stones shows of the 80s, everyone has really hit a groove.  Hearing Wood and Richards throw out lots of hard chords and bluesy fills, you get the feeling they could keep this up all night…

‘Under Cover’ was always the high point of the album of the same name and by the late 80s it had become a genuine beast live. This show presents it as juggernaut, big on chopping riffs and even bigger on mechanical rhythms.  Jagger takes up third guitar once more and his hard chord progressions lend the performance a strong backbone.  A static Michael Philip isn’t always easy to watch, though – he’s always much happier given freedom to roam – and here, his steely look of concentration on a particularly sweaty face is unnerving; it’s almost as if all of his veins are fit to burst. A trusty cover of ‘Harlem Shuffle’ is easily the weak link in the night’s set list, but with a full compliment of horns and the chance for the backing singers to shine, it’s a fine performance.  Watching it back, it fails to generate the same levels of excitement as anything preceding it, but as with most things, it was probably far more enjoyable for those lucky enough to be there.   A stately old faithful, ‘Tumbling Dice’ cranks the guitars and the excitement once more and although any performance of it by this point could descend into “Stones Going Through The Motions”, the band and their hired session crew give their all.  The blu ray release does the performance justice by placing Wood’s guitar very high in the final mix.

With ‘Miss You’, fans finally get to experience The Stones stretching out and taking the track in a more interesting direction.  The studio cut found the Stones jumping on the disco bandwagon but, here, a decade later, the song is reinvented as a taut funk rocker, heavy on the guitar and with a brilliant pulsing bass.  The overall sound makes it fit much closer with the Steel Wheels material, and with Bobby Keys dropping in an absolutely killer sax break, it quickly becomes a highlight of a very long set.  ‘Midnight Rambler’, on the other hand, isn’t quite the show-stopper it had been during the 70s, but with some fine harmonica work from Jagger and a brilliant guitar tone from Wood appearing sporadically throughout, it’s a decent performance in its own way.  There’s certainly just enough grit to keep Stones devotees happy, even if the more casual fan might be better served by the recording from the seminal live LP ‘Get Your Ya-Ya’s Out’.

A genuine must-see, an outing of ‘Salt of The Earth’ sees the band joined by Izzy Stradlin and Axl Rose, then both of Guns N’ Roses fame.  Both massive Stones fans, they could’ve joined the band for anything and made it work.  This, though, is truly special.  Axl takes on Keef’s part of the vocal, exploring a lesser heard lower register, while Izzy gets to fulfil the role of “Stones sideman” with a genuine authenticity, obviously thrilled to stand next to Wood whilst trading riffs.  As the track gains speed and momentum, so too does Rose: he’s running up the catwalk, occasionally breaking into his easily recognisable squeal…and, yes, fans are also treated to his trademark wiggly dance – as famous to GN’R fans as Jagger’s camp struts are to the Stones’ adoring crowd.  By comparison, ‘You Can’t Always Get What You Want’ seems fairly workmanlike, a feeling reinforced by a close-up of Wyman looking uncomfortable and bored (or possibly needing the toilet), but any fatigue in the performance at this point is lifted by some strong piano work from session player Chuck Leavell who begins to really make his mark on the touring band here.

At the point where the set might’ve reached its first inevitable sag, a little pressure is taken off the Stones by reverting to something less energetic and the blues from their past is augmented by Eric Clapton who plays up a storm throughout ‘Little Red Rooster’ (he’s always at his best when sharing a stage with people he admires, rather than being the sole focus), before the legendary John Lee Hooker joins everyone for a spririted ‘Boogie Chillen’.  If there’s any reason to add this set to your undoubtedly already large collections, these guest spots, along with the earlier appearances of the Guns N’ Roses lads, are definitely it – a brilliant piece of musical history.  Clapton, especially, manages to make his ten minutes on stage count – so much so, he attracts a look of mild contempt from Jagger, creating a moment that’s unintentionally very funny.

Pulling into the last part of the set, Jagger takes a well earned break and Richards takes centre stage.  After watching Keef wandering around the stage seemingly in his own bubble for ages, it’s a superb moment when he finally gets the spotlight thrust upon him…until he starts to sing. Throughout ‘Can’t Be Seen’, he wails at random, never caring for actual notes let alone a tune.

Thankfully, by the time the band and horns launch into ‘Happy’, he’s more than warmed up. In fact, he’s in brilliant raspy voice and the rest of the band attack the tune with a real vigour: Ronnie’s slide work is especially aggressive; Leavell’s piano work has a huge punch and the horns truly go to town. ‘Gimme Shelter’, ‘Sympathy For The Devil’, ‘It’s Only Rock N Roll’, ‘Honky Tonk Women’ and ‘Brown Sugar’ are somewhat predictable in the way they’re performed but, much like the rest of the show, are more than entertaining.  For the bigger fan, a dark rendition of ‘2000 Light Years From Home’ is potentially more interesting. With a performance that centres around the push and pull between Richards’s trebly guitar chops and Leavell’s bright piano sound, it manages to sound huge and menacing, if not always entirely like its studio counterpart.

Pretty much all the performances are great on this night, but the show invites one criticism: as with any Stones shows from the 80s and beyond, most of the 60s material sounds a little weird in the hands of a massive stadium rock band, but the choices themselves cannot be faulted.  ‘Ruby Tuesday’ and ‘Satisfaction’ are fine but purists will certainly favour other more vintage performances. ‘Paint It Black’ sounds especially odd, taken at speed and sounding more like a weird flamenco cabaret act than anything. That’s not really helped by it having the unenviable task of following ‘Happy’…but something had to…

The Tokyo gig was always a welcome reminder of the Steel Wheels tour but this footage from New Jersey is something else.  With a great set-up and midway through a huge trek, the Stones not only seem invigorated but clearly know they’ve got their best new material behind them in a very long time.  The market may now have been flooded by Stones archive live shows, ranging from the historically important but actually quite dull (Live at The Marquee, 1971) to the aged and workmanlike (Fonda Theater, 2015), but this joins the ‘Totally Stripped’ box in being a vital collection filler.  The Stones can still cut it without embarrassment; they’re promoting their last great album of self-penned material and there are a couple of stellar special guests. With a great set and a band truly knowing they are on great form – even with the various cameras adding to the pressure – this is a fantastic show.