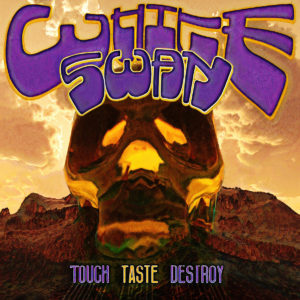 Between the doom metal riffs and darkwave synths, The White Swan gave the world two potential classics with their respective 2016 and 2017 EPs, ‘Anubis’ and ‘The White’. Lovers of heavy riffs were given plenty to mull over with the band’s self-penned material while the heaviest ever version of Wings’ ‘Jet’ proved the Ontario-based doomers also had a sense of fun. Their eagerly awaited 2018 release ‘Touch Taste Destroy’ doesn’t necessarily think much further outside of the box – but then, it doesn’t need to; The White Swan’s gift of riffs combined with an ultimate heaviness sees the three numbers off in particularly great style.

The title track announces the band’s welcome return with a typically sludgy riff. Only, this time, they don’t even give the listener the luxury of an intro to settle in. Within just one chord, the majestic heaviness is joined by Mercedes Lander’s lead vocal; her delivery is, perhaps, her most assured with the Swan so far, calling cleanly through the sludge with a clean sound that’s hugely appealing. The slight synth element lurking within previous work has been turned up too – here, those synths pierce through the swamp with a brilliant clarity…and within less than a minute, the crossover style that made the previous EP’s really stand out sounds better than ever. With a strident rhythm informing the vocal and a busy guitar solo, the track already has plenty to recommend it, but for lovers of pure sludge, it goes one step further again when the heaviness is cranked up another notch during an intense instrumental break. Eventually, taking the main riff and driving it heavily into people’s heads before tailing off into feedback, The White Swan bring a great climax – and it seems that so much has happened in a third of the time it would take most sludge bands to warm up.

Heavier still, ‘Inamorato’ offers a riff that’s pure doom/sludge, showcasing the guitar skills of Shane Jeffers against the insanely deep bass work provided by Kira Longeuay. The riffs are applied with an oppressive slowness so it’s almost down to the bass drum alone to provide something of a rhythm. In time, the groove settles in without losing any real weight. It makes Electric Wizard and Sleep sound like lightweights…and just at the point you feel it might get tiring, a vocal appears. Thankfully, the Swan’s gift for juxtaposing heaviness with the almost angelic, otherworldly vocals really pays off. Dressed in slight filters, Landers carries the weight of the melody in a way that’s just lovely; echoes of previous tracks are present, but along with the title track, her voice definitely seems more prominent than ever. Sandwiched between these two musical behemoths, ‘Pelvic Sorcery’ teases with a heavy, grinding bass sound and funereal chug. Stoking up the drums, Lander drives the number with some fantastic toms. Their near tribalist stance is a great fit for the sludge that slowly unwinds beneath and it’s a tune heavy enough in places to cause deliberate audio clipping and potential damage to speakers. A wordless backing vocal really reinforces a love of the other-worldly and, again, Lander’s lead is almost siren-like, but if anything wins out, it’s the lead guitar work, complimenting the rhythmic sludge with a heavy blues howl that’s a reminder of how much a great retro melody can give even the heaviest sounds a genuine feeling of texture.

For those who’ve followed The White Swan’s progress so far, ‘Touch Taste Destroy’ may not surprise, but it’s three numbers are a more than welcome addition to their catalogue of doom/sludge madness. The slight increase in synth presence is a very welcome move all round, and as before, the fantastic production value is key to an all-round great listen. Three releases in, although the band’s cross-over style comes with a feeling of being a little predictable, at it’s best it sounds light-years ahead of the nearest competition.