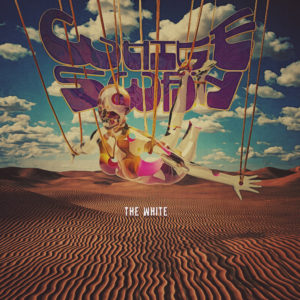 Towards the end of 2016, Canadian doom merchants The White Swan unleashed their debut EP. Although just offering the discerning riff-junkie just three tracks, on ‘Anubis’, Mercedes Lander and her crew of heavyweight sludge lovers proved that quality always wins out over quality. Between the band’s own ‘Blood’ – a perfect fusion of heaviness and an odd, treacly psychedelia – and the heaviest version of Wings’ ‘Jet’ ever – hearing is believing – the release was an instant classic. Several months on, their eagerly awaited follow up doesn’t so much pick up where the previous tracks left off, but tries its utmost to smash the previous efforts into smithereens [in this case, meaning a thousand pieces; at no point do The White Swan attempt to put their heaviest stamp upon anything written by Pat DiNizio, but it might be a fun idea…]

Everything has the same kind of consistency and brilliantly heavy feel as the first EP, without too much temptation to shake things up by introducing any new influences. The feeling of continuation is hammered home by the choice of opening track: yes, it comes with the slow and sludgy feel you’d hope for if you loved the first EP, but being purely instrumental, there’s not much beyond a massive riff to latch onto. …But what a riff it is. Stretching beyond six minutes, ‘North Carolina’ is top grade sludge, peddling the heaviest of guitar sounds as Shane Jeffers gleefully churns slow chord after slow chord repetitively for the better part of three minutes, eventually choosing to counter that with a soaring and echoing lead sound that’s not so much about melody but extra texture. With Kira boosting that with an equally tough bass sound and Mercedes pounding a slow rhythm, The White Swan bring their own skills to sounds previously perfected by Crowbar and Melvins; sounds then brought into the twenty-first century by the likes of the excellent Morag Tong. Provided the lack of vocals doesn’t make you feel uneasy (the riff really does dominate), then the EP is off to a fine start.

Seemingly recognising the importance of sequencing, the band choose to follow their most confronting number with their most accessible to date. ‘Lions’ mixes things up a little by placing various darkwave synthy sounds beneath another devastating sledgehammer riff from hell, but it’s the use of multi-tracked voices that ensures something so heavy also hits the sweet spot. Using the same tones and filters as heard on ‘Blood’ from the first release, Lander implores to be thrown to the lions; her relatively clear vocal performance acts as the ultimate contrast to the sludge, before various wordless harmonies join her in a surprisingly lovely sound. It shows off all of The White Swan’s trademark sounds better than ever – even rivalling ‘Jet’ and ‘Blood’ as the ultimate Swan experience, both in performance quality and overall sound. Those who loved the previous EP will be utterly knocked sideways by this number…guaranteed. The title track, meanwhile, draws everything to a menacing close by mixing elements of both of ‘The White’s previous tracks – something that should delight extant fans. With a heavy riff underpinned by an even heavier piano chord to get things underway, there’s an instant feeling this will be special. As the twin guitars labour their chosen riff and Lander’s slightly more urgent vocals rise from within the gloom, this number is both heavy and very assured in it’s aims, but also boasts a surprisingly melodic chorus to balance out the genuine sludge elsewhere. As with ‘Lions’, The White Swan show they’ve a very definite idea of the sounds that are important to them, but the fusion of dreampop/shoegazy voices and amazing metal means they never sound like a carbon copy of any of their influences and as this track (and EP) pulls to a close with the lead guitar puncturing the riff with a piercing sound before injecting another round of deep sludge grooves, it feels somewhat disappointing this must come to an end.

‘The White EP’ is lots of great things: it’s heavy, it’s alternative, it’s got an otherworldly voice fighting against some amazing sludge. These things alone provide a pretty spectacular twenty minutes or so. As before, nothing here will be easily digested by those not swayed by metal of any kind, nor has it been created with any prime time radio support in mind, but for those who love sludge and – especially – those who liked ‘Anubis’, this EP is essential listening. Halfway through 2017, it already deserves a place among the year’s top ten best releases.