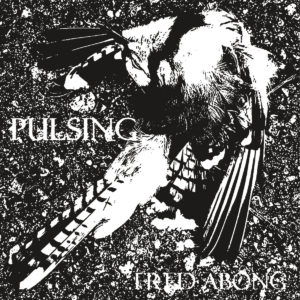 In the summer of 2018, singer-songwriter Fred Abong released his ‘Homeless’ EP, effectively returning him to the world of recording and live performance. In support of the disc, Fred made extensive appearances across the UK with Kristin Hersh, including a very memorable show at Ramsgate Music Hall on a very hot Sunday night.

Unleashed into the wild on the eve of a second UK tour with Kristin, ‘Pulsing’ in many ways, is a logical continuation of ‘Homeless’. While half the EP takes an electric stance, fans of Abong’s previous release will find an immediate kinship in its deliberately introspective vibe.

The opening track, ‘Footprints’ makes a strong impression as a finger-picked guitar sets up a lovely melody, showcasing Fred’s love for an unfussy and simplistic approach. It might only be a brief musical sketch but it’s lovely. From it’s breezy opening, the number seems to become moodier as the seconds pass and by the second half, the heavy guitar and disconsolate mood are an equal for the most despairing moments of ‘Homeless’. Moving from a slightly rough riff and into the kind of downtune that could be labelled acoustic grunge, Fred surely reaches out to disheartened indie fans everywhere as he sings about a mystery man at the back door, calls out fakers and eventually wanders into a tale regarding blood on the floor. It’s all very curious. The title cut revisits some of the more intricate finger-picked moments from the ‘Homeless’ EP, except it delivers everything in a much dirtier style. The opening chords almost jar with their huge presence – and, indeed, pulse – before descending riffs and a repeated refrain of “please don’t go too far” truly leave the listener hanging when the music stops at just under two minutes. The avoidance of an obvious hook or any need to stretch things any further shows a very strong Robert Pollard influence and while the abrupt ending could seem a bit provocative, this should still appeal to lovers of lo-fi singer-songwriter works that always crave new underground sounds.

Combining Syd Barrett-esque strums with a distorted edge, ‘Firefly’ very much continues on a downbeat path, but with Abong adding a superior vocal and the addition of a distorted edge throughout, its comes with a broader appeal. As with ‘Homeless’, the focus here is very much on atmospheres and contemplation, as there’s no big hook; nothing to catch you straight away. When the number does finally embed itself, it ranks alongside ‘Equinox’ as one of Fred’s most enduring solo tunes and easy to see why it was chosen for release ahead of the full EP.

In a markedly different approach, ‘Pulsing’s second half dispenses with the acoustics and finds Abong wielding an amped up electric guitar. ‘Sum’ works a sharp chord progression that isn’t far removed from some of Bob Mould’s stripped down works and sets up a distinctively moody feel. Moving into the verse, none of the harsh feelings are lost and as Fred reflects upon “the past and things that we smashed” his slightly husky voice is on form when joining the post-punk jangle. The way the vocal is placed low within the mix makes it much harder to follow any obvious narrative, but that only makes the lo-fi style seem like a great stylistic choice for Abong’s sometimes obtuse mumblings. With an ugly solo used to top everything, the number feels even more indebted to the Huskers, but never quite as pointedly as ‘Wire’, a fantastic thrasher that quickly sets up a wall of distortion. On this, one of his most angry songs, Abong throws out a series of angular chords that sound very abrasive, yet when combined with his usual understated vocal style, it all results in some DIY indie gold. It’s one of those numbers that on first listen just sounds unfinished – oddly confrontational even – but a few plays slowly allows the track to sound more appealing. With its unsettling charm it comes across very much like the wordier and more complex offerings from the prior release.

Best of all, though, ‘Meet Me’ features a fine intro that almost revisits Abong’s goth-oriented past, as a deep but melodic drone quickly takes a hold. The way his guitar is subjected to various filters instantly recalls The Cure circa ‘Pornography’, before another Husker Du noise-fest fills most of the next minute or so. It’s then all change for a third time as the number tails off with a very angular and repetitive riff where the use of effects and distortion is vital. As with most of his work, Abong’s lyrics feel more like a sketch of a thought than a fully formed song; he doesn’t repeat anything more than once and any concession to a hook lies within the music itself. Part goth, part lo-fi noise, part post-hardcore crunch – there’s so much within these three minutes and yet it doesn’t feel like enough. With so many great ideas here, it’s one time that a more conventional approach to songwriting really could’ve paid off. As it is, though, it joins ‘Firefly’ as a definite highlight and is still a superb addition to Abong’s catalogue.

‘Pulsing’ – the EP – manages to wedge at least three different styles into six songs in a little over fifteen minutes, but it’s to Fred’s credit that he’s chosen and sequenced the material in a way that it seems to have a natural flow, even if a couple of the songs end prematurely… By introducing electric elements, some of the material here feels like an obvious progression from the very home-spun ‘Homeless’ and when played in tandem with that EP, it sounds even better, as that minimises any potential frustration that stems from a couple of these songs bowing out far too early. Teetering precariously between arty, cool and simple at all times, even with a couple of flaws, ‘Pulsing’ is recommended for lovers of lo-fi goodness everywhere.