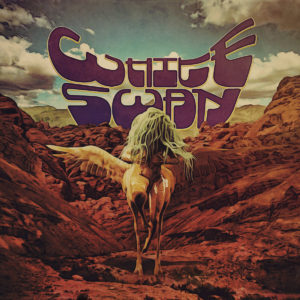 As part of the second wave of nu-metal, Kittie will always be best known for a couple of cult singles from their debut album, ‘Spit’. While one of those tracks, ‘Charlotte’ remains arguably one of their finest recordings, the all-female growlers carved out a career that by the end of 2016 had released six albums and had experimented with various metal-based subgenres. Band founder and drummer Mercedes Lander launched a new band near the end of that year…and on the basis of their first studio recording, The White Swan puts the entire Kittie catalogue in the shade.

On their debut EP ‘Anubis’, slow and sometimes oppressively heavy riffs supply the meat of The White Swan’s material, but perhaps the biggest draw – and especially to those who’ve struggled with the growling vocals omnipresent in Lander’s other band – is the presence of melodic, clean singing throughout. With Lander handling vocals, guitars, keys and drums, ‘Illuminate’ gives a fantastic indication of the band’s hybrid sound, beginning as it does with a slow, deep riff punctuated by cold, wobbly synths. It’s almost retro-futuristic in its confrontational style and once the verse takes a hold, things get even better as Lander and Shane Jeffers crank out threatening doom riffs by the non-metric ton. Those who like a riff with some presence will love this, but it’s the contrast with Lander’s inviting vocal that really sells the track. The verse moves along slowly, with the push and pull between vocal and riff always lending a pulsing heart, but the chorus improves things as The White Swan factor in more melody and a few vocal harmonies. Perhaps the new wave keys are a little underused – especially as they feel as if they should have more of a place within this dark universe – but even so, there’s much to love here…and a few plays is all it takes to become enamoured with the band’s sound. ‘Blood’ follows a similar route, but introduces a chunkier and slightly faster riff set against a heady drum beat. It doesn’t take much more for this to sound like an instant classic of the doom variety, but the occasional hints of Orange Goblin give things an extra lift while Lander’s treated vocal filters through each wave of sludge with a cool sense of ease and clarity. The more buoyant feel loses none of the heaviness, either – for the more purist listener, there’s a slower heavier section that absolutely slays, like Sabbath turned up a hundred-fold…and there’s no dilution through fussy soloing here, either. The overall effect is like hearing a heavier and more intense version of the UK’s Black Moth – a very welcome prospect indeed.

The self-penned material sets The White Swan on an interesting and very promising musical path, but it’s the inclusion of a cover tune that’s bound to turn the most ears. It isn’t because it’s necessarily better than Lander’s own compositions (‘Blood’ is the EP’s standout for a number of reasons), but rather more to do with the choice of cover itself. There isn’t anyone over a certain age who hasn’t heard – and subsequently formed an opinion on – the Wings hit ‘Jet’. Whether you find the song annoying or herald it as a 70s pop classic (the latter is the correct opinion, of course), it’s a guarantee you’ve never heard it like this. Lander has done the wise thing: she’s shifted it into a whole new genre without changing the root melody of the original song. In essence, what we have here is the original guitar riff re-imagined as heavy as Spacebeast and the most aggressive Melvins, played at a doom speed, with the band loving every moment. The production values make everything sound sludgy – something else in its favour – but best of all? Those harmonies and backing vocals are completely intact. McCartney’s super-infectious “woo-woo’s” are delivered with a clean tone, with Lander’s voice almost giving them a sinister sweetness. Even those not especially interested in doom metal should lend this a friendly ear – it’s got a minx-like sense of the mischievous; a dark heart with a sugary wink that shows a great love for the original tune and in no way ever sets about slaughtering a sacred cow.

The riffs are superb throughout this first White Swan offering and the level of heaviness greater still, but perhaps the biggest draw is the presence of a clean and charismatic vocal throughout. In just three songs, this band not only makes an impact but plunge a musical fist deep into the chest of the unsuspecting, resulting in a short listen that’s very much about the riff as a hook. ‘Anubis’ is highly recommended…and then some.