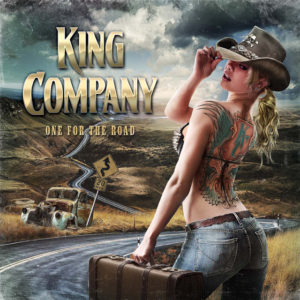 Their debut album presents a fairly solid set of old-fashioned hard rock tunes heavily indebted to Joe Lynn Turner era Rainbow, Joe Lynn Turner era Yngwie Malmsteen and Whitesnake (without Joe Lynn Turner). Actually, with regard to the latter, they owe more to various second division Swedish hard rock bands with a Whitesnake obsession. It doesn’t push boundaries, preferring instead to stick rigidly to familiar musical turf, but to King Company’s credit, there are a few good choruses along the way and frontman Pasi Rantanen possesses a strong voice that’s well suited to their style. It’s easy to see why fans of very traditional melodic hard rock might really like ‘One For The Road’.

“It was nineteen hundred and eighty five” opines Rantanen at the beginning of the title track, their opening gambit already more than making the listener aware of King Company’s viewpoint, without irony that they are indeed stuck in 1985. Within less than a minute, the band have settled into a sound that’s lifted almost entirely from the fastest Rainbow and Deep Purple workouts (think ‘Fire In The Basement’, ‘Spotlight Kid’), with everything recycled without an ounce of the band’s own imagination. Sure, some of the lead guitar work comes with a good tone, but it’s not quite enough to forgive the general feeling of plagiarism combined with a whole world of clichéd lyrics. Aside from a punchy sound, there’s not so much to enjoy here; the lyrics are corny, the music comprised of second tier Rainbow workouts and two or three hackneyed Malmsteen retreads. It’s likely King Company wanted to make an impression by delivering their fastest track first – and indeed, it’s so easy to imagine this as a live set opener, with the vocalist running apace to his microphone to deliver the opening line as small explosions rise from the stage – but these guys are capable of better. Not necessarily anything more original, but better all the same.

So, then looking at those better moments… ‘Shining’ begins with a heavy-ish, bluesy riff that’s a dead ringer for Snakes In Paradise, a heavy late 70s affair that’s punctuated by pleasing guitar horsey noises. The verse has plenty of meat, driven in part by a vocal that’s both melodic and gritty, before a Whitesnake infused hook sets everything off nicely. The best moments come courtesy of guitarist Antti Werman who tops everything with an impressive solo to go with the solid riffs. In 2016, there will be people who love this, but it’s very much a musical throwback to a time before David Coverdale decided to crack America.  There’s no doubting that this kind of mid-paced, chunky rock is very much the band’s forte.  With a faster pace, slightly muted chug and bigger keyboard, ‘Wheels of No Return’ tempers some of that 70s bloat with more of an AOR slant, something also obvious in the increased use of harmonies. A big chorus and melodic solo are reasonable enough fare, but the rough edges of the vocal let the side down just a little. Even so, the track presents a really good stab at old-school melodic rock.

One of the album’s highlights – ‘No Man’s Land’ is a Whitesnake homage with a pumping bass driving its verses and a reasonably emotive voice to match. Moving into the pre-chorus, the marriage of chugging riffs and bell-like keys is perfect for the style, before a familiar fist-clenching hook brings everything together. Those who like things shamelessly old-fashioned could well love this. A contender for the album’s best track, ‘Farewell’ comes loaded with a tough riff and big vocal, evocative of a truckload of retro Swedish hard rock. The presence and pace both present the band in a good light, but by the time a Takara-esque chorus belatedly appears, the band really reel you in. Of course, it owes everything to a few classics, but it’s hard not to like something so well played…even if there’s nothing genuinely original on display. ‘Wings of Love’, meanwhile, kicks off with a riff that’s a well worn classic, familiar from about a hundred other melodic rock workouts from across the decades but, even so, Werman plays with presence and style, retaining a great tone throughout. It’s one of the album’s most melodic tunes and simultaneously stands as the touchstone for almost everything King Company are about. Much like ‘No Man’s Land’, fans of the style will be impressed.

Despite lots of reasonably enjoyable workouts and a couple of genuine gems, there’s also a real clunker. A power ballad of sorts, ‘Cast Away’ is genuinely horrible. Atop a sharp piano riff, Rantanen belts his voice somewhat uncomfortably, clearly showing the style is already against him. Clichés about “saying goodbye” and “a roll of the dice” suggest he’s on the receiving end of bad times, while his voice is painful rather than pained. Moving into the chorus, some Whitesnake-ish harmonies, a nautical, swaying riff and a lyric about being adrift add up to a colossal embarrassment. Maybe the title track wasn’t so bad after all…

Elsewhere, ‘Holding On’ settles upon a previously explored melodic style but adds choppy guitar lines before another pleasing hook reveals itself, ‘Coming Back To Life’ retreats to the Purple-isms of the opener, before working a chorus that could’ve been borrowed from a hundred bands signed to Escape Music and ‘Desire’ brings a slightly dirtier style to the table, with bassist Time Schliefer rattling his four-stringer with intent. Another number that is wholly inspired by Snakes In Paradise, it’s barrage of riffs and organ, huge vocal and nifty guitar break shows King Company somewhere near their best.

Closing the album, ‘One Heart’ brings the expected nod to Rainbow‘s ‘Stargazer’ and Led Zeppelin’s ‘Kashmir’, complete with keyboard patches evoking stringed sounds in the way a mellotron would’ve forty years previously, while multi-tracked guitars chug out a familiarly exotic riff influenced by North African climes. A simple chorus brings things back to traditional melodic rock 80s style where Rantanen oversings a tad and a couple of solos add plenty of flair. It’s all big and bombastic – perhaps a touch overlong at seven minutes – and while it’s far from King Company’s finest hour, they appear to play with passion. It mightn’t be their best track, but it makes a strong enough final statement.

On first listen, ‘One For The Road’ appears little more than slavish homage. It’s actually better than that, though; despite its very predictable nature, there are a few genuinely great tunes in the King Company canon. Most importantly, while not all of the tracks are classics, there’s very little that sounds like obvious filler and it’s the kind of record that’ll sound best in the car on those daily commutes. If you like a bit of Snakes in Paradise or any of the other Scandi bands obsessed with David Coverdale and his ilk (not a euphemism), this is certainly worth hearing. It mightn’t be worth shelling out full price for, but that’s a different matter.