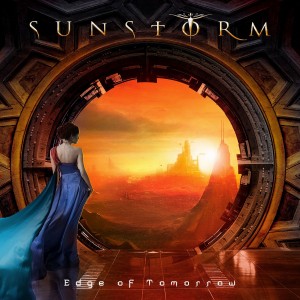 With Rainbow‘s 2016 gigs firmly off of the table, Turner duly returned to one of his regular projects, Sunstorm. An often highly melodic AOR outfit with three enjoyable albums to their credit, it’s fair to say they’ve become somewhat of a fan favourite. Their third album (2012’s ‘Emotional Fire‘) reworked some 80s AOR tracks for Joe’s still strong lead; the results came close to essential listening. Sunstorm’s fourth album, 2016’s ‘Edge of Tomorrow’, while very good, isn’t up to the standard of its predecessor. But then, it was never going to be, given the pedigree of that material. It’s still a record that fans will love, however, with the pairing of Turner and guitarist Simone Mularoni turning in some great performances throughout.

A match for anything from the first two albums, ‘Don’t Walk Away From a Goodbye’ begins with some great tapped guitar over a riff that recalls any number of high energy classics. Mularoni then improves things further by adding a brilliantly melodic lead, before Turner steps in with a slightly gravelly hard rock vocal. The combination of the hugely seasoned voice and punchy, melodic tune is pleasing, but the chorus makes sure it’s a track that should appeal to so many listeners. Unsurprisingly, Turner approaches everything in the manner of a man who’s done it all a thousand times, but it doesn’t make it any less enjoyable, while the featured lead guitar solo – a surprisingly lengthy affair, filling several bars – manages to straddle a near-perfect balance between showmanship and strong melody. The title track takes things down a notch and offers some great sounds, with cleaner guitar work sitting effortlessly against a pumping bass in places, while a rockier slant allows a slightly heavier riff to join Turner’s voice – and here, the veteran singer sounds superb. A huge chorus is on hand for him to demonstrate his still impressive range, before another amped-up solo takes centre stage. It might be a little over-long clocking in at six minutes, but the whole band are in fine form and a couple of plays suggests the chorus is one of the album’s very best.

‘Everything You’ve Got’ tempers a driving riff and punchy bass with a keyboard sound that recalls the more accessible elements of the early 80s pomp of Touch. Although the tune is over familiar right from first listen, the performers sound like they’re having a great time. As before, the solos are big and flashy, but a very cool twin lead hints at a style that’s classy, but underused, and Joe – ever the pro – is in great form. On this very 80s sounding rocker, he turns in what is perhaps his best performance this time around. ‘Heart of the Storm’ injects something slightly different into Sunstorm, introducing a slightly heavier sound all around, as faster riffing and more aggressive drums naturally lead to a bigger punch than their AOR norm. Turner takes it all in his stride – this is, after all, merely a sidestep from the Rated X release – as the rougher edges of his delivery collide with dirtier guitars. It’s definitely a number where Turner isn’t the star, though: the riffs outshine the vocals given every opportunity and Simone Mularoni shows he is more than gifted when it’s time to indulge in some speedy fretboard work. ‘Burning Fire’ at first sounds like it’ll be bigger than most of Sunstorm’s material, thanks to a huge wash of keys and a chuggy guitar, but then takes a u-turn to become one of the album’s more AOR-centric efforts, with a huge chorus worthy of Icon circa ‘Night of the Crime’. Any similarities to Icon are increased thanks to a seamless blend of guitar and keyboards which occasionally sound like that aforementioned album’s guitar synths, while another impressive solo shows Mularoni really knows how to fill space with an easy flair.

‘You Hold Me Down’ works a fast riff that isn’t so far removed from some of Judas Priest’s ‘Turbo’ LP, dictating a speed that allows drummer Francisco Jovino plenty of scope for smashing his toms, setting up a number that might just have been better suited to Rated X than Sunstorm. The music’s very good throughout and the vocals are strong, yet somehow it ends up being the album’s worst track – and by some distance – (no) thanks to a non-event of a chorus that, firstly, sounds half-formed and, secondly, doesn’t really suit Turner’s voice, eventually forcing him to growl and shout like Graham Bonnet on a bad day. Thankfully, this overwrought and over-worked meat-fest is followed a big ballad, ‘Angel Eyes’, thus giving a welcome contrast. With a beautiful, soaring guitar at the outset, it’s instantly a pleasant listen and with Alessandro Del Vecchio’s flowing piano providing a very strong melody, the foundations are solid. Turner wobbles a little on the verse, the more stripped back sound exposing the years of wear upon his vocal chords, but upon reaching the chorus – again, with some great harmonies leading to a very 80s approach – he sounds fine.

Elsewhere, ‘The Darkness of This Dawn’, ‘Tangled In Blue’ and ‘Nothing Left To Say’ add some fairly predictable melodic rock fair. While each is a track that adds very little to the Sunstorm legacy, each is well played. Very much the kind of AOR tunes which float past and seem like familiar friends, each allows Turner more than enough opportunity to show why he’s still in demand some forty years after his first big breakthrough and thirty since the end of his Rainbow peak. On ‘Nothing Left To Say’, in particular, the combination of his voice and a slightly bluesier riff results in a solid classic rock workout, while Mularoni drops in more commendable guitar work. On a release where these tunes feel the most like filler, that says even more about the standouts.

While a couple of the rockier moments suggest ‘Edge of Tomorrow’ might be more of a fan-oriented release than some of Sunstorm’s previous works, there’s a consistency throughout that makes it a satisfying listen, that with the help of some great guitar work and a few very strong choruses, shows there’s still more life in Joe Lynn Turner’s voice yet, despite a few rougher edges creeping in. If, you already have those previous Sunstorm albums, you’ll certainly want this. If, somehow, Sunstorm have slipped under your radar previously, however, the best advice is to make a beeline for ‘Emotional Fire’ first and then go from there. ‘Edge of Tomorrow’ is fine LP, but ‘Emotional Fire’ is excellent…