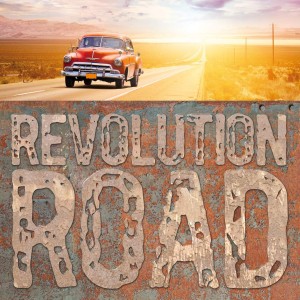 Over the years, Berggren continued to ply his trade as a vocalist and in 2014 he landed a job with a few other AOR/melodic rock session musicians and became a key member of Revolution Road. RR’s self-titled debut [issued on German label Avenue of Allies, home of State Cows] does exactly what you expect and offers ten hard and melodic rockers in a sharp mid/late 80s style, often with hints of Whitesnake and Bernie Shaw era Uriah Heep.

Melodic rocker ‘Love’s Got a Hold On Me’ shows off the best side of all involved. Recalling his younger days with SIP, Berggren’s vocal delivery is smooth yet commanding, showing an effortless flair for switching between the Coverdale-esque crooning and Euro-inflicted belting. The rest of the band never slouch, either. The rhythm guitars are particularly interesting as between the tried and tested grubby chord progressions, Carmine Martone (culled from a Whitesnake tribute band) gives things an extra edge by teasing with various muted sounds. Francesco Marras’s lead work, meanwhile, sweeps majestically, always full-toned, easily a match for many a lesser-known AOR guitarist at the time of this album’s release. Holding together the melodic rock force, the rhythm section of Paul Logan (Eden’s Curse) and Francesco Jovino (ex-UDO) do a first rate turn in gluing the elements together, with Logan especially high in the mix, but never upstaging the lead players. Softer but hitting the spot from a melodic perspective, ‘Pretending Hearts’ relates the tale of a one-night stand with the kind of empathy that Coverdale could never muster in a million years. Berggren drops his voice accordingly throughout, a more syrupy tone carrying the bulk of the melody over an understated but well-structured riff [Another variant on the ‘Don’t Walk Away’ motif, AOR fans]. It errs towards the saccharine on occasion, but there’s no denying there are some good performances to be heard here.

The band’s title cut brings all of their musical tricks into a particularly focused melodic rocker. Following a keyboard intro from Alessandro Del Vecchio, things fall away for an atmospheric voice and clean guitar and thumping bass – all underscored with complex guitar noodles in the left speaker channel, before putting best foot forward for a crunchy mid-paced chorus. Again, there are strong and direct comparisons with Snakes In Paradise to be made, but it respresents this bunch of musicians strongest suit. Finding room for one of the album’s best solo spots, the middle of this track finds Marras and Martone trading lead licks much in the manner of Judas Priest’s Tipton and Downing. Each one with his own distinct tone, yet both guitarists well suited to the job in hand, a few bars of unashamed widdling puts the icing on the proverbial cake making this a track not to be missed. Another easy stand out, the chugging melodicism of ‘Hold On’ revisits many a hard rock classic of the 80s, simple harmonies doing their utmost to fill space in the most direct manner possible when hammering home the title, while the lead vocal in turn appears particularly heartfelt. Another classy solo ups the ante before the band drop back for a couple of numbers with an increased emotive impact…

Slowing things down, ‘Ain’t Gonna Give My Heart Away’ is a slow bluesy affair, leaning rather more heavily towards Whitesnake, with a passing resemblance to a couple of pre-blues Gary Moore ballads. This allows Berggren ample opportunity to show off his range and there’s absolutely no struggle for him to curl his way around the louder more forceful notes – a task you’d hope from any great rock vocalist – but it’s during the quieter moments of the verses he really excels. Dropping down, he affects a lovely velvety croon, the like once again befitting of the youthful David Coverdale. Combined with an unfussy musical arrangement, this is a real winner. Swirling Hammond adds more old fashioned flair, but it’s the guitar work that really steal the show. A special guest for a featured solo, Alex Beyrodt (Sinner/Primal Fear) fills three bars with some fine sweep-picked chops, which although not matching the classically-inflected best of Ritchie Blackmore, provide near-faultless results.

Revolution Road can really rock out on occasion too, as demonstrated by the Dio-esque ‘Take Your Love To Town’- all lurching riff and over-annunciation – and set opener ‘Wings of Hope’. The fast-paced, driving rock at the heart of ‘Wings of Hope’ is of an unavoidably Euro persuasion, especially so in the way the choppy chords collide against tinkling keys and a huge voice, but the end results are better than most, thanks to a very AOR chorus. Despite best intentions, though, it still ranks among RR’s weaker tunes. The dirtier grooves at the heart of ‘Balloon’, on the other hand, are fantastic. Following an acoustic noodle and back-porch chord progressions hinting at past works by Tangier et al, this quickly becomes a full-on electric stomper in the quasi-Zeppelin and Snakecharmer mould. AOR fans will be keen to note a key change into a killer chorus gives this a near-irresistible charm, but the combination of Berggren’s performance and the twin guitars of Marras and Martone ensure this isn’t just destined to be forgotten. Yes, it almost goes without saying you’ve heard it all before, but any tune that gets you singing after just two or three plays has something.

This release sticks to a musical formula that’s very familiar for those involved in its creation. When the tunes are as consistently enjoyable as they are on this LP, though, that could never be considered a criticism, especially when it results in one of the most enjoyable melodic rock discs of 2014. For those still carrying a fondness for those Snakes In Paradise albums from two decades previously, or perhaps the Snakecharmer LP from 2013, Revolution Road – both the band and the album – are well worth fifty minutes of your precious listening time.