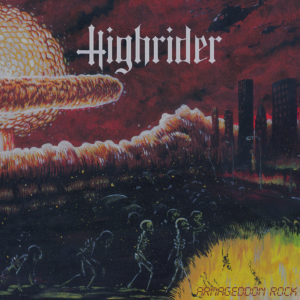 ‘S=Txl’ opens with a huge wash of Hammond organ, lending everything a haunting sound. The rest of the band soon explode into a relatively heavy riff that takes 70s rock staples and drives them into the present with a much more aggressive sound, closer to Tremonti than ye olde world Whitesnake. To make the band’s specific brand of hard rock even harsher, the vocals shout along with a hardcore punk sound – the band’s frontman sounding like a cross between Sick Of It All’s Lou Koller and Slayer legend Tom Araya. It’s all fairly abrasive, but a few twin leads and a dark instrumental mid section do their utmost to keep an obvious balance between melody and sheer power – even with the organ audibly wobbling off-key at a couple of points. An extended instrumental coda, too, shows off a band with plenty of drive, with heavy guitar riffs right at the forefront. This opener is perhaps the closest Highrider comes to a traditional approach but, even then, the vocals sometimes feel like a mismatch with the music, hinting that the band’s melting pot approach that could unleash something potentially more interesting.

And it does. For ‘Agony of Limbo’, the band try something just a little different. Some fast downstrokes result in fine thrash and the traditionalists among you will be relived to know that these riffs alone are hard and fast enough to sustain the whole number. However, the choice to flesh out these full-throttle sounds with Hammond is a curious one. There it is, though, like a solid blanket of sound, beavering away beneath the wall of guitars. Rock fans are very much used to the organ in retro rock spheres, as evidenced by Deep Purple or a Blue Oyster Cult sound (as per Highrider’s label mates Wheel In The Sky), but it’s never really had a place in thrash – the odd thing is, it works! The extra layer sets Highrider apart from the myriad other bands out there thrashing away…especially during the slower parts of this particular where it gives a Sepultura-ish breakdown a very unsettling edge. Beyond the classic thrash arrangement, there’s a great song here too; the vocals are forceful, the chorus a screaming fury. Factor in a couple of slower moments and cool drum fills and it has a little of everything that makes thrash so enduring. Production wise, also, things are strong enough for everything to be heard in an oppressive clarity, especially the organ whirring almost constantly between the speedy downstrokes. With organ-pepped thrash aplenty, the unpleasantly named ‘Semen, Mud and Blood’ shows more of these Swedes at full pelt, but it’s by no means a retread of ‘Agony of Limbo’. Amid the speed, the lead guitar motifs occasionally cry with an old school charm, a couple of bridge sections bring no-nonsense head bobbing and the vocals attack with a throat caning volume – all of which adds up to make Highrider sound like a musical tour de force, before shoe-horning in some great melodic riffery to finish.

Like a hefty hybrid of the first two tracks, bringing a little thrash intensity against a heavy wall of sound approach, ‘The Moment (Plutonium)’ is positively epic. An extended intro of almost sci-fi infused keyboards leads the way for tribal drums to be faded in, along with a huge chugging guitar. The way this intro never feels the need to rush shows some compositional skill, really pulling in the listener. While this hints at a progressive metal slant, what eventually emerges is a huge metallic beast, like In Flames channelling something of an early 90s vintage. The riffs are consistently classic, while the swathes of keyboard add an almost Uriah Heep goodness somewhere it really shouldn’t belong and – somewhat inevitably – Highrider sound like masters of their art. This is especially the case once the thrashier elements disperse to allow a melodic solo to step forth before everyone pulls together on a huge riff – a riff made even better by those keys. The chorus is a bit of a one line affair, but given the weight of the music and the enthusiasm in which that hook is delivered, it’s easy to forgive any lyrical shortcomings. Hands down, this is the EP’s best track.