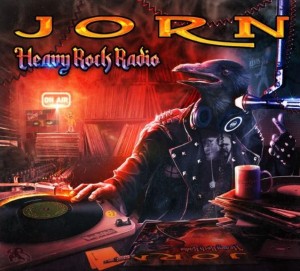 Naturally, the album fares best when Jorn is sticking firmly to the expected. He sounds great when turning out enjoyable re-workings of material originally by Deep Purple, Black Sabbath and Dio. ‘Rainbow In The Dark’ is a very faithful retelling, with Lande’s love for the material seeping through almost every second. Although not really heavier than the Dio original, it comes with a sharper keyboard sound and souped up guitar solo, complete with nimble tapping. You might not choose to listen to it over the original – especially considering you’ll almost certainly have a much loved copy of ‘Holy Diver’ on the shelf not too far away – but it’s fair to say everyone does a good job here. The same can be said for ‘Die Young’ (originally from Black Sabbath‘s Dio-helmed classic ‘Heaven & Hell’), where Lande curls his chops around the material and belts with glee, while his band of helpers power through some tough riffs. It’s another faithful retread and goes some way to showing why Lande is such a well respected performer. A step up from both of these, Deep Purple’s heavy and slightly funky ‘Stormbringer’ appears in a superb heavier take, again, showing Lande’s vocal ease and range, alongside the work of a band who clearly enjoy themselves when backing him.

In the album’s only real surprise, Foreigner’s ‘Rev On The Redline’ proves a great fit for Lande, as his style and range pushes the track into the realms of latter day Whitesnake, albeit with better vocals. Everything during this performance edges on great melodic rock; it’s heavy but accessible without losing the timeless charm of the original recording, despite being a couple of notches heavier than Mick Jones and company probably expected. A musical sidestep sees a reworking of Iron Maiden‘s ‘Final Frontier’ (not an obvious choice of track) turning out rather well also, allowing Lande to indulge in another huge performance driven by a reasonable balance of melody and power. The production values on this track are a bit thin; it’s possible that an artistic decision was made to try and replicate the slightly iffy sound of the Maiden recording, but given some of the mangling of other people’s tunes found elsewhere on this disc, that kind of perfect replication wasn’t necessarily on the agenda.

As far as the rest of the record goes, it’s a rather different story, where the artist has clearly decided that almost anything can be turned into an old-style heavy metal workout and still come up trumps. He’s wrong. The Russ Ballard penned ‘I Know There’s Something Going On’ (originally a 1983 hit for Annifrid “Frida from ABBA” Lingstad) isn’t the worst offender, but ends up sounding like any one of a million generic melodic metal tunes. With the guitars turned up and Ballard’s penmanship, the track had potential to bring out lots of melodic rock goodness, but with Jorn being a man who clearly bunked off music college on the day of the “Less Is More” lecture, it winds up a massively bloated and unnecessarily imposing affair, with Jorn belting out over a riff that all too quickly becomes ordinary. If this is the best he could manage with a songwriter as respected and talented as Ballard, let’s be thankful he wasn’t in the mood for ‘Since You’ve Been Gone‘ or ‘I Surrender’. John Farnham’s ‘You’re The Voice’ gets put through its paces – made heavier for no other reason than it could be – and it’s fairly nasty, with bellowing aplenty and a couple of hilarity inducing vocal sounds thrown in, while Paul Stanley’s ‘Live To Win’ is reduced to the level of metallic stomper with foghorn accompaniment.

Not content with merely heavying up a couple of should be melodic rockers, the album also gives Jorn ample opportunity to stamp various sacred cows on the arse with his enormous heavy metal branding iron. Queen’s ‘Killer Queen’ comes across as lumpy after being rocked up unnecessarily. While Jorn powers through each line with a big presence, his bombastic tones are at odds with the kind of quirkness the song always deserves, the track only really rescued from utter despair due to some huge multi-tracked guitars from Trond Holter. By the time Lande reaches the final chorus and coda, his larger than life persona becomes too domineering and has the detrimental effect of making a usually gifted vocalist sound like he’s just trying far too hard. Kate Bush‘s distinctive ‘Running Up That Hill’ suffers a similar fate, as a riff inspired by the younger Vivian Campbell paves the way for the musician’s equivalent of scenery chewing that loses all of the finesse and brilliance of the original. Still, that’s better than hearing him and his hired hands put ‘Hotel California’ through the ringer, replacing the classic number’s faultless harmonies with unrestrained bellowing, against workmanlike riffs that could have been found on a sub-standard hard rock record. What’s more, those guitars are mastered so loudly, the vocals occasionally get swamped – and as anyone knows, to make Jorn sound somehow smaller takes some doing. This is stupendously bad: by the time he “calls for the captain”, if you love Henley, Frey and Walsh, there’s a fair chance you’ll be calling for a surgeon to amputate your ears. Rest in peace, Glenn – you’ll be glad you never heard this…

You’d think that kind of mess would represent this album’s lowest ebb, but you’d be very wrong. Journey‘s ‘Don’t Stop Believing’ gets redressed in grubby clothes, then subsequently delivered as a plodding metallic dinosaur, devoid of any real charm – with Jorn belting and growling, absolutely unaware of any pain he’s potentially inflicting. This is so bad – especially if approached in a less than tolerant mood – nothing else really need be said. Still, he loves this song – and the Queen, Kate Bush et al – seemingly enough to pick them from hundreds of other more suitable choices and if some of you (rightly or wrongly) feel he’s butchered them, he probably doesn’t care. It takes balls to even think about covering Queen and Kate Bush songs and judging by this, Jorn’s must be the size of watermelons…

Jorn is a nice bloke and he’s got a great voice when the material suits, but over half of this record is hard going to say the least. Pretty much every attempt to take pop or AOR and remould it in his image results in something that’s dangerously close, in metal terms, to being rather silly. Too often an exercise in heaviness over thoughtfulness, despite the odd ray of hope on the Whitesnake and Dio classics, with ‘Heavy Rock Radio’, Jorn takes the covers record and – with the expected lack of finesse – piledrives it squarely into the ground.