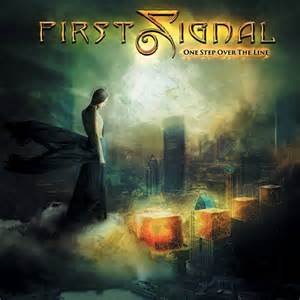 It only takes a minute or so before it’s really obvious that ‘One Step Over The Line’ is a basic continuation of the 2010 record, with First Signal presenting eleven tracks of straight melodic rock – all well played but without any imagination. Of course, for most people, it’s predictable nature will not be a problem. Since Hess is well loved by many and often sounds at his best when pitching his talents against music of an 80s persuasion, for your average AOR buff, more of the same is surely a good thing.

An instant classic, ‘Minute of Your Time’ drives forth with a brilliantly choppy guitar riff and solid rhythm. Hess appears in fine voice, while guitarist Michael Palace adds various soaring guitars throughout – peaking with a suitably thoughtful guitar solo. Underscoring the chunkier elements, the addition of a clean guitar – sounding as if on loan from mid 80s Rush – is a very nice touch and everything comes together nicely. It’s when making the move into a great AOR chorus with big key change the magic really happens and while you’ll have heard this a million times, when done this well, it still has the power to impress. This could be a leftover from the first Harem Scarem LP. Similarly impressive, ‘She Is Getting Away’ is drenched in eighties nostalgia, as the guitars play out a great riff against some slightly pompy keys (supplied by Alessandro “I’m On Everything” Del Vecchio) resulting in something that could sit happily alongside all of your cult favourites. Another big chorus gives Hess a lot to work with and, in short, if you liked the material on the First Signal debut, this will become a firm favourite in record time.

‘Pedestal’ starts in a very grand fashion with a blanket of keys and ringing rhythm guitars setting the scene, before the verse drops into a chuggy but melodic groove. It sounds like two ideas arc-welded together, but a very strong chorus is on hand to ensure everything comes together in fine form. With the guitar from the intro making a reappearance for a bridge, it all starts to make more sense, and by the time the hugely harmonious chorus – featuring a world of backing vocals – presents itself a second time, this track starts to sound like a contender for one of the album’s best tunes. The title track, meanwhile, trumps everything with some great guitar lines, a classic AOR arrangement and a killer chorus. Much like ‘Minute of Your Time’, there aren’t any surprises, no ground breaking phenomena…just a strong melody and one of the best melodic rock hooks ever. Like another early Scarem leftover, it’s tailor-made for Hess and it’s no wonder he was so keen to take time out from his regular project for this. The hard sound in the mix department isn’t exactly sympathetic, but there’s a superb song waiting to be heard here.

During the opening of the big ballad ‘Still Pretending’ the harsh mix really mars the material. What should sound like crisp and clean guitars are full of sibilance and Harry’s voice is frighteningly loud. Introducing the crunchier elements for the chorus improves things slightly, but overall, everything suffers from a hugely compressed mix. Moving on, the song is pretty decent: Hess struggles a tad on a couple of the higher notes, but the classic mid-pace and Def Leppard-ish slant shows all the hallmarks of a genre classic. For the musicians involved of course, it’s their bread and butter – they could probably play this in their sleep. ‘Kharma’ [sic] marks something slightly different in that the material takes a side-step. Things seem fuzzier in the vocal department and musically speaking, the mid paced AOR also sounds a little cluttered – it’s hard to tell whether this was a stylistic choice or the fault of the mix – but by the time the chorus and simple guitar break assert themselves, it shows the core of everything that makes so much of First Signal’s material enjoyable. ‘Love Gets Through’ is designed from the outset to be even more appealing to the melodic rock purist, with a quirky 80s keyboard leading into a superb guitar break, before exposing a tune that sounds like classic, classic Scarem takes hold. Clean and crisp, the punchy arrangement is more spacious, allowing Hess to perform at his best during the verse before taking things up a notch to hit the listener with a chorus that’s pretty much as good as anything on the Harem Scarem debut. This and ‘Minute of Your Time’ make the album worth hearing on their own.

Elsewhere, ‘Love Run Free’ is oddly mixed AOR by numbers that doesn’t give Palace so much of a showcase as some of the other tracks but, again, is saved by a faultless chorus hook (it’s deserving of a bigger budget and a professional producer but, sadly, you’ll have to accept it at face value); ‘December Rain’ is a reasonable number spoilt by sharp edges caused by the dodgy mix, but at least Hess tackles a great chorus with gusto; ‘Broken’ takes by-numbers balladry and comes up with something that’s as close to filler as the album gets and ‘Weigh Me In’ is AOR on autopilot. None of these numbers weaken the impact of the album’s strongest moments – and ‘Love Run Free’, if heard in the right mood, might even join a couple of the standouts – but you’ll own a hundred or so albums containing variants of these…some, naturally, even featuring the musicians involved with this project.

Each of the songs on ‘One Step Over The Line’ – by and large – are great, with a huge chorus or six ensuring that fans of the genre will love what they hear. It’s such a shame, given that First Signal’s material is sometimes a cut above most of the tat churned out by AOR labels in the name of keeping the dream alive, that the production leaves much to be desired with regards to both warmth and subtlety. Fans of the first First Signal LP will already know they want this…and they’ll buy it whatever, but, without fear of labouring a point, these songs needed and deserved a better technical approach. If it hadn’t been mixed/mastered by a man with cotton wool in his ears, it would have most certainly been one of the year’s best melodic rock albums.