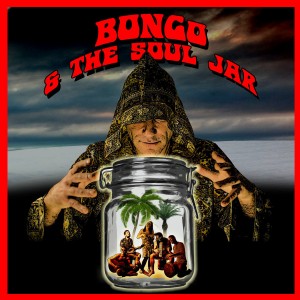 After a gentle start comprising of soft guitar and soulful voice, the title track leads the way with a funky workout, as heady rhythms and brass sounds drive a great tune. Beyond the brass, James Owen’s bass is key as he approaches his four strings in a very busy manner, quickly unveiling the signs of a strong player, while vocalist/lyricist Bert Rogers holds everything with a cool vocal. The roots of the sound are spawned from acid jazz, but The Soul Jar take these elements and make them very much their own. It’s a strong starting point, but the tracks that immediately follow are stronger still. If the influences during that first track aren’t so obvious beyond the acid jazz roots, ‘Lonely Fool’ is a real eye-opener. McAdam delivers a lovely rhythm guitar sound, bright and ringing throughout, while Owen indulges in another well-crafted bassline. Faced with a tune that brings out the best in everyone, Rogers ups his game and his slightly husky tones become frighteningly familiar – to hear him sing in this way, with the emphasis firmly upon the soulful cry, he could easily be singing something from Paul Weller‘s ‘Wild Wood’. The ease in which the band approaches this style is impressive, making this track an instant standout.

Working with something smoother, ‘Rivers’ is essentially a showcase for the bass – again, faultlessly played – while McAdam pierces through the warming flurries of notes with harmonic tinkles. All the while, a very assured vocal adds to the all-round smooth grooves. That is, until the bridge section; here, the guitars are briefly pushed to the fore, teasing, suggesting the funkiness will get rockier before slunking back allowing the bass to work its magic farther. The bridge is a bit of a red herring, though, since the addition of more harmony vocals during the second half makes the track lean towards the even smoother…but stopping just short of easy listening, it shows a professional approach and a real love for the funk. With Rogers amid a more upbeat performance, ‘Breakaway’ bounces along superbly with some unavoidable acid jazz markers, the vocal challenging the bass for dominance. It’s already a strong musical workout, but by the time McAdam steps from the shadows to deliver a blues edged guitar solo, it really cooks. Taking the funk and driving it into a ska rhythm, ‘Man Dem Say’ unleashes a slightly harder edge to compliment the angrier lyric that criticises the media – more specifically the tabloid press; even more specifically The Daily Mail and their twisted views that make their stupid readership live in fear of immigration. Musically, the basic interplay between the drums and bass provides the anchor, but a quick change of tempo into the chorus is all that’s needed to stop everything from feeling one paced. It’s in the closing instrumental section where the best music can be heard, as the band shifts their funky chops into a much higher gear and some decent bass work takes centre stage. Overall, there’s a lot to like here, while ‘Tides of Change’ cements the band’s place as a genuine underground talent without trying too hard.

Rockier, though always retaining a rhythmic edge, ‘The Way Down’ showcases choppy funk guitar and spacious chords alike, while a swirling organ is on hand to keep everything retro. While not necessarily as interesting as the bass led tracks, each of the elements is fine enough and a fuzzed up guitar solo adds a refined anger. The cuckoo in this musical nest, ‘Western Road’ is dark, yet powerful; far more rock than funk, as tribal drums and a dirty rhythm guitar join in a fuzzy groove. As with ‘The Way Down’ Rogers sounds surprisingly comfortable fronting music that could have been performed by a different band to before, while McAdam wastes absolutely no time in grabbing the opportunity for another fiery solo. Any soul present comes courtesy of a smooth harmony that in some ways has no place here, but it works out fine. This pair of numbers is definitely more Ocean Colour Scene than Brand New Heavies…and while they mightn’t be a typical sound for The Soul Jar, these tracks suggests there are more musical interests and avenues for the members to discover…and approach with an equal amount of professionalism. Ending everything on a gentle note, big harmony vocals and understated brass inform parts of ‘Winter Sun’, before Rogers unleashes his inner Weller one last time on a tune that more than occasionally sounds like The Style Council with a few extra guitars for good measure. Behind the wordless harmonies (their catchy “bub-ba-bas” very much adding to the sunny mood) McAdam drops in a few soaring guitar sounds, adding an important extra layer. Another of the album’s obvious standouts, leaving something so catchy until last shows that someone really understands the importance of sequencing an album in the old-fashioned sense. This – like most of the album – has been great.

This debut is the kind of record that gets better with each spin. While ‘Western Road’ can be slightly jarring on first hearing, there are no weak numbers and there’s some great playing throughout. ‘What Have You Got To Lose’ immediately scores a place as one of the most unexpectedly polished debuts of 2016, with an enjoyable set of songs that sound like the output of a well-established band.