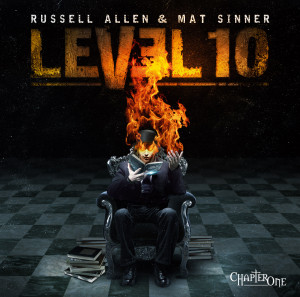 As you’d expect for a project constructed around Mat Sinner, the music has a particularly European power metal bent, but during its better moments also possesses a strong leaning towards 80s hard rock, the slower numbers really coming to life thanks in no small part to the powerhouse vocals of Russell Allen.    Whether at full belt or taking one of his rare forays into gravelly and bluesy tones, few would deny that Allen possesses one of the best voices in rock. A pity then, that on some of these tracks, his performances aren’t given their full due, since the album comes with a slightly muddy end mix, under which some of the vocals on the faster tracks seem a little buried.

The full-scale rocker ‘Cry No More’ presents four minutes of fist pumping action with elements of Primal Fear and Helloween in the engine department colliding with the kind of speed that drove Judas Priest’s ‘Ram It Down’.  One for the Helloween fans, most likely, but there’s little else to grab onto – even Allen seems a little low-key, parts of his performance mixed below a wall of harmony vocals resulting in a missed opportunity.   With that out of the way, the moody ‘Soul of a Warrior’ proves that when they slow things down, Level 10 come with far more appeal, churning out a late 70s riff with a powerful approach that allows Allen ample opportunity to chew through each line with a Dio-esque flair.  Between the overwrought cries, there’s a meaty bassline from Mat Sinner powering the way through the darkness, while a selection of Hammond organ stabs (courtesy of Alessandro Del Vecchio – a member of almost every Frontiers Records project during 2014) stokes up the old-fashioned quotient.  The Dio-esque charm of this track quickly elevates the potential here – particularly once Roland Grapow (ex-Helloween/Masterplan) and Alex Beyrodt (Primal Fear) step up to trade off lead guitar solos.  With everyone punching so high, the album seems in possible danger of peaking far too early…

Predictably, we come crashing back to earth with ‘No Turning Back’, a throwaway Euro rocker that sounds like another late 80s Judas Priest cast off, with a heavy reliance on clichés.  Again, it’s more than fair to assume the Helloween devoted will like it, but Level 10 won’t be charming the more discerning melodic-eared listener with such cheesy bombast.  ‘Last Man on Earth’ is an improvement, mixing touches of twenty-first century Pink Cream 69 with a harmony fuelled chorus.  While the hook is of the simplest variety imaginable, the guitar flourishes – plenty of chug and muting – lifts things considerably.  Compared to ‘Voice of the Wildnerness’, however, it pales into mere insignificance.  Like ‘Soul of a Warrior’, ‘Wilderness’ brings out the best in everyone involved – there’s an abundance of twin lead guitar work from Beyrodt and Grapow, the teaming of these two key players is so natural; they were absolutely made to work together.  With the mid-paced thud of the rhythm and suitable riff, Allen takes the opportunity to bellow forcefully, yet surprisingly tunefully, while a bevy of female harmonies heavily recalls the bombast of Arjen Lucasen’s Star One project.  Fans of the bigger end of melodic rock and Euro-metal are almost guaranteed to enjoy this tune and yet again, it shows Level 10 are at their strongest when tackling the slower material.

‘Blasphemy’ brings the heaviest riff to the table, a fearsome downtuned monster that’s a clear attempt to recreate something from the Symphony X ouvre.  Unsurprisingly, Allen sounds at his most comfortable, trading in some of the wails for a low voiced metallic growl.  Again, another lead guitar break is well executed – and those things combined should have made this track one of Level 10s best, but the presence of a particularly Germanic chorus complete with wailing vocals and the simple rhyming of ‘blasphemy’ and ‘catastrophe’, is a tad embarrassing…or perhaps even a catastrophe in itself, if you will.

The remainder of the album recycles similar themes.  ‘Scream & Shout’ is a terrible 80s metal cast-off that perversely sounds like it might be good in the live set, ‘Demonized’ sounds like something Priest binned during the ‘Angel of Retribution’ sessions, ‘The Soul Is Eternal’ revisits mid-paced stomping without improving on previous attempts at similar styles.  The best of the rest, ‘One Way Street’ is very, very safe Euro hard rock – think Snakes In Paradise and ‘Forevermore’ era Whitesnake and you’ll get the general idea.  Despite being so formulaic, Allen delivers as best he can without overpowering everyone, while a nifty guitar break shows Beyrodt to have a fine melodic ear.

Despite some great moments, Level 10 is subject to the usual pitfall of assembling a band whereby expectations might be just too high.  With almost everyone involved having released works of a critically acclaimed standard,there’s just too much to live up to.  There’s a strong chance Allen’s fans might be disappointed with this after those excellent (and more expensive sounding) recordings with Adrenaline Mob…but those willing to keep an unbiased open ear will certainly find something of enjoyment. Expect little and Level 10 might just deliver a lot – the constituent parts are excellent, after all. There’s no denying, however, Level 10 will find a stronger connection with the Sinner/Primal Fear fanbase.