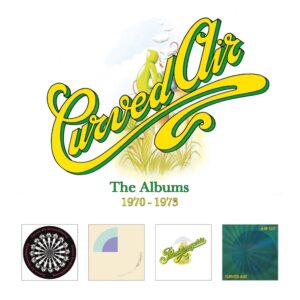 For most people, British progressive rock band Curved Air are known for two things: being the first band to ever issue a picture disc and for the having the legendary Stewart Copeland having occupy their drum stool in the mid 70s. Considering that vocalist Sonja Kristina had previously been an important part of the London theatre scene in the late sixties – appearing in Hair – and Curved Air actually scored a UK top five hit single in 1971, you’d expect them to be more widely celebrated. Perhaps the reason they aren’t is due to lots of their classically- and jazz-derived music being very hard going. Their earlier work often values complexity over obvious hooks – something that makes the funky ‘Back Street Luv’ single seem like something of an anomaly – and the way they switch between different moods from track to track can, at first, be disorienting. They are very much a band that requires a lot of time and patience before most of the listening rewards become obvious.