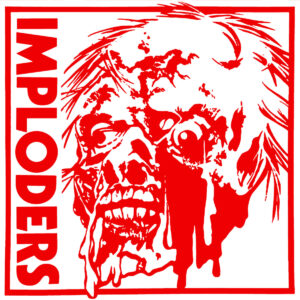 Formed during the first Coronavirus lockdown of 2020, Toronto’s Imploders crank out classic sounding hardcore in a very early 80s style. In just five songs, their debut release is hard, fast and brutal, and often far better than your average DIY thrash-punk. Despite an unfussy approach, there’s nothing about the material that seems cheap or wantonly trashy. Quite the opposite, in fact; it’s almost as if every note has been put together with the underlying thought of how Keith Morris, Ian MacKaye and John Doe might’ve approached things. In short, this debut delivers six minutes of the most perfect hardcore; a sharp set of sounds that are absolutely guaranteed to thrill lovers of the style.

Kicking off with a straight blast of hardcore, ‘Dimwit’ opens with a pained yowl before the music finds the band attacking their riffs at breakneck pace, drawing influence from the early hardcore scene. Moments of Black Flag-esque thrashing are tempered with a choppier breakdown allowing the rhythm section more of a chance to stretch out, while the more strident guitar work takes on a brilliant tone, calling back to seminal hardcore works from the first US wave. ‘Shoot To Kill’ expands on a similar theme by honing in on a fierce bass rattle, driving the kind of riffs that filled ‘Group Sex’, the debut album from Circle Jerks. The featured vocal here is scratchy, but still manages to be a little more palatable than Keith Morris’s insane, almost manic anger, while the sharp edged guitar work, again, recreates an absolutely perfect tribute to the hardcore pioneers. It’s obvious at this point that Imploders don’t especially care for originality. They aren’t here to put any kind of new or clever slant on the music they love; their main aim is to deliver timeless sounding punk – and that’s something they do perfectly.

Equally short and sharp, ‘Keeping A Close Eye’ churns out some terrific sounds with the guitar work at first teasing with something that sounds like supercharged skiffle, before dropping into a more angular hardcore style that’s derived from bands like State of Alert (aka S.O.A.). Something of an unexpected musical hook comes from a couple of stops allowing an angry vocal to pierce through. A simple trick, perhaps, but it’s just enough to make this sound different enough from the preceding anger, before ‘Vertagogo’ really reverts to type, sounding like the ultimate Circle Jerks tribute, right down to having a couple of scattergun vocal moments lifted directly from the classic ‘Live Fast Die Young’. As close to generic as this might be, it’s certainly no less great.

The EP’s best track ‘Rip ’Em Off’ actually finds the band slowing down a little, but remains just as impressive. The music showcases a band that are equally adept when channelling a classic punk style, delivering a minute and a half worth’s of chopping riffs, coupled by a vocal that’s tempered with reverb effects. This gives the material more of a CBGB’s/Dead Boys quality, while the more moderate tempo allows a chunky bass to take on a more dominant role. Those who love straight hardcore might consider this somewhat lightweight, but for those guys, there’s time enough for a Greg Ginn style, atonal lead break to cut through, which very much lends both a welcome directness and a more obvious link with the rest of the material.

If you have any interest in classic hardcore, ranging from early Redd Kross, Circle Jerks, D.O.A. and Adolescents, then this is certainly a release that should be on your radar. In terms of no nonsense, straight up hardcore punk played in an early 80s style, Imploders could just be one of the best arrivals on the scene since Natterer’s released their ‘Toxic Care’ EP in 2017. Grab a download now!