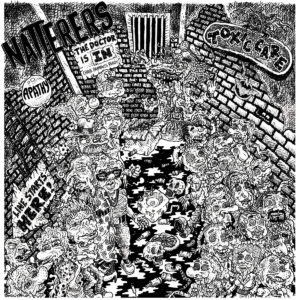 Hardcore punk has existed in many forms over the years, from the straight edge to the crusty to having deep roots in subgenres like grindcore. Despite variations, it’s often at its best when played absolutely straight. For lovers of traditional hardcore, this debut EP from Natterers immediately sets the band out as one to watch. Although only their first proper release, this EP shows a huge professionalism, not only in the way the songs are crafted, but also the way they’ve recorded. This EP retains a DIY ethic without sounding like it has been recorded in a shed.

Taking a pure hardcore stance, ‘Exist or Live’ and ‘Numb’ barely stretch to a minute apiece, with each number demonstrating ferocity and power, as the Yorkshire based band pull a great deal of influence from Transatlantic roots planted in the early 80s. ‘Exist or Live’ opens the record with an ominous guitar riff with a garage rock tone, before the whole band explodes into an angry riff that fuses the classic sound of Circle Jerks with a kind of New Bomb Turks punk and roll bounce. Switching between the styles, drummer John puts in a performance that makes things seem effortless, while out front Emma howls in an existence that’s a “downward spiral back to insanity”, the fragility of the human mind being somewhat of a recurrent theme in Natterers’ work. A mention of eye-gouging as opening gambit, too, is both confrontational and angry and doesn’t break in the listener gently. ‘Numb’ cranks tension with a heavy riff, before tackling an aural assault that cranks buzzsaw guitars and pneumatic drums to extremes. As if OFF! and the Cramps spawned the ultimate offshoot, the lyrics come at breakneck speed and the subject of numbness through anti-depressants really brings out the sense of scepticism through anger, especially when delivered in such a scattergun manner.

Stretching out to explore more of a melodious style (relatively speaking), ‘Matter Over Mind’ shows off some superbly tough guitar lines, cutting through at every turn. While the broader guitar sound suggests the music is often at the forefront here, the lyrics are both smart and thoughtful. “Your words stabbed me like Juncus in the eye…a cue to flee”, Emma spits as the opening statement of a number that promises to be a howl of rage. A touch less Black Flag and more a tribute to Revelation legends Burn, it’s great to hear the way each of the band members interact throughout the next couple of minutes; their controlled approach makes this arrangement seem much deeper – and longer – than it actually is, never a note out of place. For fans of bands like Where Fear & Weapons meet and the aforementioned Burn, this one’s an instant classic.

‘War Whoop’ sounds like a great homage to ‘Plastic Surgery Disasters’ era Dead Kennedys, especially in the way a howling surf guitar tone is used to open the track, but also in the way the hard and fast rhythm is occasionally intercut with a more complex chord progression. That opening guitar riff is given pride of place at the close of the number, but the two minutes between are classy punk, with Emma’s voice challenging the chopping guitars for dominance. ‘We Are The Cattle’ finally allows the bass to take on a bigger role, opening the track with an impressively fat sound, before the band crash through a fantastic Black Flag homage, with Thomas even tapping into a near-perfect tribute to Greg Ginn via a terrifically discordant solo, while ‘Surf Off!’ goes headlong into classic hardcore that mixes the roots of Dead Kennedys with the more contemporary strains of Mongol Horde and Better Than A Thousand. In short, if you have any interest at all in hardcore sounds, you’ll find so much to love here.

Six songs, approximately ten minutes, a flying fury and a bucketload of sweat come together to make this debut very exciting indeed. The tunes burn brightly and cut deeply, despite often sounding like their obvious influences. With a very limited physical release, for hardcore fans – and especially those who look for an audible and discerning lyric – ‘Toxic Care’ will be one of the most sought after cassette/vinyl releases of ’17.