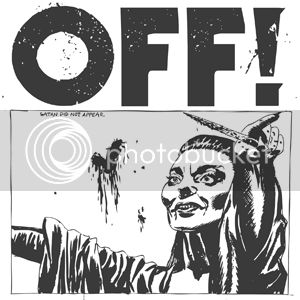 It’s often said that as punks get older they lose their edge.  Not Keith Morris, it seems.  He may have sounded like a little more restrained on parts of those later Circle Jerks releases between 1985-87 (and their 1995 reunion disc), but he’s more than making up for that here.   As frontman of OFF! – also featuring Burning Brides guitarist Dimitri Coats, drummer Mario Rubalcala (ex-Rocket From The Crypt) and Redd Kross bassist Steve McDonald – the original Black Flag frontman sounds like a barely comprehensible ball of rage.

This self-titled release from 2012 follows the release of four 7” EPs, a live release and a split 7” with Washington noisemakers (the) Melvins.  Just as those EPs comprised uber-short hardcore punk tunes, their first full-length record offers more of the same.  Full-length, of course, is relative: Sixteen tunes in under sixteen minutes, this release barely allows OFF! time to take a breath.

By the time the first three numbers have torn past in a relatively pacy fashion, it is abundantly clear that Morris sounds as vibrant – and as angry – as he did back in 1978, as the energy emanating from the 56 year old vocalist is absolutely immense.  Although his vocals have been slightly distorted, he sounds as edgy he did on those Black Flag recordings he made in his twenties.  Remarks like “You think you’re the king of the scene you created” (‘I Got News For You’) and “my life was saved by Darby Crash”(‘Jet Black Girls’) are delivered with brilliant arrogance, while ‘Cracked’s line regarding the “hardcore karaoke retirement home” shows more of the self-mocking streak which has often had a place in his lyrics.

While it could be easy to dismiss OFF! as primarily Morris’s vehicle, the rest of the band are equally awesome when it comes making these short, angry tunes truly burn.   Dimitri Coats churns out buzzing, fuzzy and dizzyingly brilliant chords at breakneck speed, very much in the spirit of classic Black Flag and the earliest Circle Jerks (although he’s never tempted to reproduce anything that sounds like one of Greg Ginn’s atonal jazz influenced lead breaks), while the rhythm section are superbly tight.  Coats’ tone and approach is particularly amazing considering his “day jobs” have been on the hard rock scene and not in punk (hardcore or otherwise).

Mentions of Pollywog Park (the location of a particularly badly received Black Flag show in ’79) and Redd Kross are notable in one of the record’s best numbers ‘Feelings Are Meant To Be Hurt’, a minute long flashback to Morris and McDonald’s place during the scene’s formative years.  As he spits “you cannot take what belongs to me!” Morris is a force to be reckoned with, taking on the hardcore bands that have had careers modelled on his influence from the early eighties scene.  What sets OFF! apart from so many post 80s hardcore bands, though, is the near-purity of their sound. Yes, Morris’s voice may appear distorted in a way that it just wouldn’t have been back in the late 70s, but looking at the big picture here, unlike lots of hardcore recordings, there’s absolutely no influence from other genres (most notably metal) creeping into their sound.  The old-school vibes have a lot to do with two of OFF!’s members being important faces on the early eighties scene and the presence of Raymond Pettibon sleeve art. But there’s another factor that just as important in the end result: thanks to Coats’s minimalist production, these recordings capture lots of the same spirit of Black Flag’s ‘Nervous Breakdown’ EP, Redd Kross’s ‘Born Innocent’ and Circle Jerks’ ‘Group Sex’.

There have been an abundance of great hardcore punk bands since the scene flourished in the very early 80s, but only a few have equalled the raw brilliance of ‘Group Sex’ by Circle Jerks, the earliest Husker Du outings and pre-1985 Black Flag.  OFF! – both the band and debut “full-length” record – brings classic hardcore back to its truer roots. Unlike some other punk stalwarts, Morris still has plenty of fire in his belly and and this release sounds like it comes from the heart.  Essential.