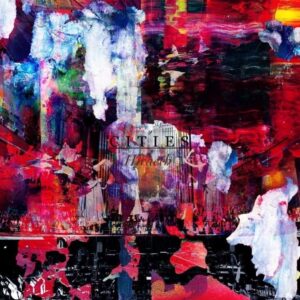 Instrumental rock band Cities introduced themselves in 2015 with the brilliant ‘Manning Alaska’ EP. Its five cuts showcased a band at crossroads of a prog/post rock sound, and between its clean finger picked guitar work and a huge concession to melody, they made post rock and instrumental experimentation seem far more accessible than most. Most people at that time seemed to be immersed in the debut from Public Service Broadcasting, but PSB quickly proved to be a one-trick pony; a fairly soulless and meandering collective whom, without samples, had no actual substance. As the months passed, the Cities EP just kept giving; its melodic riffs soared even more confidently, and its very musical heart continued to pump life into the soundtrack-like, cinematic moods in a very satisfying way.

Although the EP never quite gained the worldwide recognition it so deserved, it gained some very positive reviews before the band split, rather prematurely. The departure of one of their members – emigrating to Alaska – put everything on hold just at the point things started to get interesting.

Seven years on, the band made a long overdue return. 2022’s ‘Hiraeth’ brings more greatness with soundscapes that’ll be instantly recognisable to their fans. The core of the material sounds very similar to the best ‘Manning Alaska’ tunes, but isn’t afraid to throw a few new ideas into the pot. It actually sounds very much like something you’d expect the band to have released as their second-year disc in 2017, and that alone will make it an essential purchase for some. There are times – as with its closing number ‘Extinction Event’ – where Cities have been unafraid to try something completely different, and that’s just as cool in its own way. In post rock terms, ‘Hiraeth’ offers superb sounds wherever you choose to drop the metaphorical needle.

The opening number ‘Earth’s Loss’ is immediately recognisable as Cities thanks to a muted guitar part using finger picked melodies to create the arrangement’s early hook. The way that busies itself over waves of synth noise and eventually blooms into a jangling riff is pure ‘Manning Alaska’, but as things start to move, there’s also plenty here that’ll inspire fans with new sounds, ranging from slightly harder drum grooves and a wordless harmony reminiscent of peak Doves. With parts of the track feeling a little rockier than before, it suggests that Cities’ long overdue return isn’t about recapturing past glories as much as branching out, and by the time the inevitable climax is reached, the marriage of great, rhythmic drum work and ringing leads – occasionally hinting at a love of Matt Stevens and The Fierce And The Dead – Cities genuinely reclaim their place as true kings of the UK post-rock underground. Despite starting out with such a strong piece, though, the release has better material on offer.

‘Nineteen Sixty Eight’ is a little busier than previous Cities pieces, but retains a very familiar melodic heart. The way the piercing, clean lead guitar sounds bounce against a danceable rhythm is brilliant – sort of like a post-rock Wot Gorilla – before a combination of harder rhythms, prog-ish keys and an unexpected folky tinge pushes everything forward. As with the opener, a wordless vocal is on hand for extra texture, but it’s very much about using a voice for instrumentation, ensuring those who loved the band’s earliest instrumental jams shouldn’t feel as if things have changed too much. Bringing in a heavier riff for the climax, the band unveil a beefier sound that boosts the shrill prog-ish keys, but as with all the best Cities recordings, the focus is on groove rather than indulgence.

Opting for something a little more atmospheric, the EP’s best track ‘Infinity Steps’ taps into the kind of stately post-rock groove that sat at the heart of the previous release, but in many ways, sounds so much more confident. The drums, always laying down a dance-oriented groove, are much bigger than before, and clean toned, jazz inflected lead guitar mixes elements of early Porcupine Tree with traces of Explosions In The Sky. The way Cities have been able to take these influences and dress them in the kind of cinematic soundscapes as beloved by Moby on his million selling ‘Play’ album without ever losing sight of what they’ve long been about is about is truly impressive. What’s more, the number’s eventual rise into a surprisingly friendly melody where 90s beats collide with a few Jarre-esque notes before descending into a wall of shimmering guitar lines is just wonderful. In another smart change of mood, the lengthier ‘Extinction Event’ opens in very retro trip hop influenced environment. With that eventually blossoming into a reggae tinged melody, it’s possible to imagine that someone had been inspired by The Orb’s ‘Perpetual Dawn’, but as usual, there’s something more original lurking around the corner. With the reggae giving way to a busy groove where layers of keys dominate, Cities descend into a vast soundscape where post rock fans will possibly spot the usual influences from Explosions In The Sky, but a cold 80s sound occasionally cutting through makes this sound even more distinctive. The marriage of bass and keys gives this tune a massive heart during its most frenetic sections, whilst the bass pumps hard when things return to the inevitable reggae groove. With a strong mix of post rock and downtempo peppered with a little 90s electronica, this is never short of massive; it’s a whole new world of Cities’ making, and yet is still recognisable as the band who introduced themselves with the fantastic ‘Clozapine’ seven years earlier.

This long overdue return from Cities is lovely. Throughout the four numbers, everything you previously loved about the band re-presents itself with a much bigger and potentially better sound. With their own slant on post rock colliding with elements of retro new wave and a dose of massive 90s trip hop, it feels as if it covers a lot of ground in a little under half an hour. The way these melodic post rock sounds cascade from the speakers, and their self proclaimed “widescreen alternative rock” springs back to life with an obvious ease, it’s almost as if they’ve never been away. Whether you’re a fan of old, or the sounds of Cities are brand new to you, you really can’t afford to miss this release.