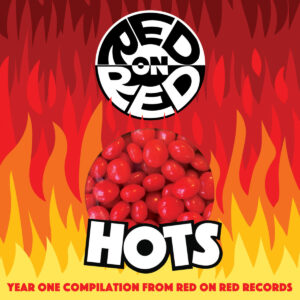 Throughout their first year in business, Justine Couvault’s Red On Red Records gave a platform to various great underground bands. The acts were often of the power pop or garage rock variety, but the coming together of the label and the largely US based acts provided a lot of entertainment during its first twelve months and often felt like a sister project to the equally fun Rum Bar label.

A few digital releases by Justine And The Unclean continued to give their fans enjoyable hook-driven sounds beyond their two excellent full length/EP releases, and label favourites Kid Gulliver more than showed how old style power pop will never die. With these artists providing something of a backbone, the label couldn’t fail, but their first year brought so much more. ‘Red On Red Hots’ pulls together seventeen tracks from the Red On Red stable, placing the familiar with the new, creating a perfect introduction for anyone who hasn’t yet stumbled across any of their releases, as well as a treat for fans looking for a couple of new tracks.

As you might expect, two of the sampler’s highlights come from Couvault herself. Justine And The Unclean’s ‘You And Me Against You And Me’ is something of a sidestep from the more energetic material from the band’s earlier releases. It was originally recorded in a country arrangement by Justine’s Black Threads – providing what’ll always be the definitive version – but it transfers to a power pop core fairly well. It might sound like more of a slow burner compared to, say, ‘Scorpion Bowl To Go’, but live in the studio sound and hard, ringing guitar give the pop/rocker a strong backbone before a retro lead guitar fills the spacious arrangement. For most people, of course, Justine’s voice will lend the track its most distinctive element and her huge, curly delivery has lost none of its character, and for her more committed fans, this will certainly be a pleasing alternative to the original cut. Justine’s Black Threads, meanwhile, are on hand with a previously uncirculated tune, ‘No Tell Motel’, working the same country/roots mood from their EP. Anchored by a taut upright bass and heavy vocal twang, it really doesn’t take long before you’re swamped by the spit ‘n’ sawdust sound, and the narrative of cheap digs and a lunchtime liaison brings the old school heartbreak to life in the most vivid way.

When it was released as a video single in June 2021, Nightspell’s ‘Pegasus’ proved to be immediately striking and the passing of time hasn’t weakened its impact. Driven by Seana Carmody’s heavy guitar sound and a suitably crashy drum part from Joyce Raskin, the brilliantly retro number ranks among the most exciting and authentic sounding tributes to the glory days of the 4AD label. Between the distorted and off-kilter lead guitar interludes, waves of distortion and contrasting floaty vocal, fans of the style may well discover a new favourite tune. Power poppers Kid Gulliver supplied part of 2021’s soundtrack with an upbeat cover of Bee Gees ‘I Started A Joke’, and their self-penned ‘Beauty School Dropout’ is equally brilliant. A punchy bass and arrangement straight from 1980 sound like a throw back to the power pop of The Knack and The Know, but these guys have a genuine spark that keeps the retro pop sounding fresh. On a most basic level, this number’s spiky rhythms, vocal counter melody and hooky chorus deserve to make Kid Gulliver stars away from their native Boston, but its the kind of track that carries an infectious energy that never tires, even after several listens.

The Chelsea Curve mix retro power pop moods with a slightly more lo-fi aesthetic on the instantly likeable ‘Drag’, calling back to bands like Jale with a mix of choppy guitar lines, vaguely alternative rock and harmonious hooks. It might seem fairly generic on first listen, but it’s one of those numbers that certainly catches up with you later thanks to a punchy arrangement and a few shameless “heys” along the way. A little less immediate, Devil Love (featuring The Shang Hi-Los’ Chuck Ferreira on drums) venture forth with a different kind of retro sound on ‘We Can Leave Tonight’. With echoes of the early Gin Blossoms and The Connells, it comes with a massive 90s heart, and the vocal style might even remind a few people of the vastly overlooked Angry Salad. A few plays unveils a genuine winner of a tune that shows how the rockier end of Americana is just as indestructable as “skinny tie” power pop. Dropping in something a little edgier, Jacklights’ ‘Bleach’ combines a power pop core with overdriven punky chords to reawaken the glory days of Stretch Princess and Letters To Cleo, whilst Linnea’s Garden deliver 50s inspired garage rock on ‘Replacement’, a tune that stokes up the twangy guitars and seems utterly unafraid of a very natural vocal. In another unexpected twist, Sugar Snow make Roy Orbison’s ‘Blue Bayou’ sound like an old, hazy b side from Lush. There’s an argument that says that just slowing something down doesn’t necessarily make for a good cover tune, but that doesn’t apply here; in fact, it suggest the label has just a fine an ear when it comes to 90s shoegaze and dreampop.

With a lot of treats in hand, this compilation is a solid listen, but it has an ace up its sleeve. Those looking for a familiar faces will delight in a previously unreleased recording from the legendary Neighborhoods. A previously “lost” mix of ‘Crown Victoria’ brings massive riffs throughout, like The Replacements channelling the ‘Electric’ era Cult. It’s sheer drive and late 80s sound crashes forth from the first note to the last; whether opting for the straight rock, or indulging in an unexpected interlude that could be Mother Love Bone, it’s great, and with David Minehan’s confident, gravelly vocal and a couple of massive, metal edged guitar solos offering some forceful noise at every turn, its six minutes never drags. Instead, this sounds like a natural rocker, complete with huge, shout-along chorus, reminding everyone of a top notch cult band. Straddling the gulf between power pop and trashy hard rockers, in terms of confidence, tunes don’t come much bigger…and now this tour-de-force can be enjoyed by everyone.

Overall, ‘Red On Red Hots’ does a great job in giving everyone an effective and broad overview of the label’s wares. Sure, it’s often weighted towards the power pop sounds of the past, but bands like Nightspell and Sugar Snow more than suggest the label aren’t blinkered. As both a celebration of the immediate past and a stepping stone to the Red On Red future, it’s fair to say that this sampler is a great promotional tool and a brilliant addition to your digital collection. Grab it now!