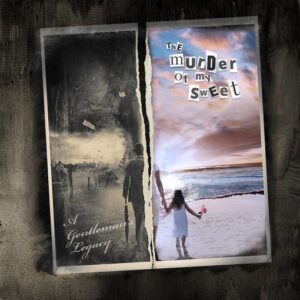 Swedish rock band The Murder of My Sweet have never thought small. Over the years, their sound has straddled symphonic rock, pomp, metal and AOR in a way that has often seemed very self indulgent. When the focus is on hooks and songs, this shows off a musical collective that has great promise. When they become obsessed with pure theatrics (as per their ‘Beth Out of Hell’ concept album from 2015), they can be really hard to take. This, of course, can lead to a frustrating and inconsistent listening experience, especially if strong melodies get swamped by too much unnecessary bombast.

Unfortunately, like ‘Beth’, their sixth album ‘A Gentleman’s Legacy’ tends to get a little bogged down in concept story telling. To make things even harder, its narrative is a continuation of ‘A Gentleman’s Hurricane’ – an album by Mind’s Eye, that won’t necessarily be familiar to all of The Murder’s fans, particularly if they’ve found themselves here via Angelica Rylin’s solo work. Unlike ‘Beth’, though, there are actually a handful of great songs hidden within the grandiosity, so if you’re able to approach it at face value and enjoy it purely for the music, it’s far more appealing. …And with Palace/First Signal guitarist Mike Palace on hand for some great playing, there are moments where TMOMS potentially sound better than ever.

‘Six Feet Under’ wastes no time in setting up the album’s concept elements, with audio-verite sounds of rain, car doors, radio snippets and, eventually, echoes of Angelica Rylin singing ‘Amazing Grace’ behind a phone call from someone in distress. This throws the listener into a universe that feels like a low budget Queensryche venture, before exploding into pomp/prog metal riffs and a choir of vocals that are immediately unsettling. Rylin eventually takes the lead, but this doesn’t actually add to the melody in hand. In fact, by the time she steps up, everything wavers between prog metal and cut price theatre – and, frankly, it’s not pleasant. That four minute intro is swiftly followed by ‘A Ghost of A Chance’, a solid piece of Swedish sounding pomp rock where an AOR core is augmented by symphonic keyboard patches and a heavy riff. The keys are ugly, but luckily, everything else is great. Palace’s 80s metal edges via the guitar are a solid addition and he sounds confident backing Rylin, who in turn, offers an incredible vocal with a crying edge that runs rings around most of her previous solo release. The big melodic hook really gives her scope to deliver a pleasingly full vocal and the old style melodic rock sound is a definite call back to the best bits of the band’s previous album, ‘Brave Tin World’.

Venturing further into AOR territory, the semi-acoustic intro to ‘Rise Above’ seems to a be a huge side step for the band at first, but the quieter mood allows Rylin’s voice to take centre stage. It isn’t long before TMOMS show their more typical colours, though, with the arrival of a huge melodic metal riff to bolster the second verse and main hook. The core melodies here are very strident, with Rylin straddling between the melodic and theatrical and, as such, should appeal to a broad cross section of the melodic rock audience, but a squirly solo is horribly misjudged. The mangled notes sound like an ugly version of something that should have been played on a very retro guitar synth, or better yet, been left to Palace alone. As it is, his strong, soaring melodies are swamped by an unnecessary squelchy keyboard accompaniment that sounds both cheap and misplaced. It isn’t enough to spoil the whole track but, unfortunately, it leaves an indelible impression for the wrong reasons. Luckily, ‘Wheels of Time’ is far sharper in terms of arrangement, with Rylin sounding superb when driving forth with a strong melody, whilst the rest of the band sound at ease tackling something that sounds like a mix of ‘Mindcrime’ era Queensryche and the lighter end of ‘Dark Adrenaline’ era Lacuna Coil. The mix of acoustic and mechanised beats gives the rhythm a real punch – one of the only times Daniel Flores sounds enthused behind the kit – and the big, rising melody gives Angelica with plenty to work with. The more modern aspects of the track are counter-balanced by a shamelessly old school chorus melody, but it’s all constructed in such a way that it never feels too much like a throwback. Long time fans of the band will take to this in a heartbeat, whilst newer ears will almost certainly get to experience the band at somewhere near their very best, assuming those listeners have made it past the more difficult elements at the start of this musical journey. There’s a chance that some of those will have fallen at the first hurdle.

Elsewhere, ‘Trick of The Devil’ ambles aimlessly with Rylin crooning against some indeterminate synth work, stretching a semi-theatrical melody to breaking point, before filling several minutes with chopping riffs that can never decide on bombast, melody, or quirk, essentially becoming frustrating, and ‘Please Don’t Wait Up’ is a saccharine musical theatre mush that is utterly reliant on the listener actually caring about the story based aspects of this project, despite the narrative neither being interesting or completely clear. Again, it’s hard to find fault with Rylin’s voice, but this really is one of those times when TMOMS insistence on grand ideas gets in the way of genuine song-craft and, naturally, the use of various keyboard patches will never be a workable substitute for an orchestra, which – obviously – neither the band or record label could afford.

Ensuring this album shouldn’t be ignored by lovers of a more hook driven style, ‘Damnation’ wields a chunky and choppy metal riff, over which Palace drops a brilliant melodic counterpoint, before Rylin pulls out a massive melodic rock vocal that could’ve been taken straight from her excellent solo release ‘Thrive’. Of particular note here is how comfortable Rylin sounds when delivering a very “stage” vocal against the heavier elements, and Palace’s choice of strained guitar solo that manages to work despite not really offering an obvious melodic root. There’s an unexpected interlude where multi-tracked voices call back to peak Kansas and, perhaps, a couple of moments that err too closely to early Dream Theater, meaning this should be a mess. However, a massive, catchy chorus acts as the ultimate in musical glue; the way Rylin’s voice soars on a melodic hook that belongs on a much “purer” melodic rock disc gives the performance a genuine heart, leading to the kind of track that genre fans can enjoy time and again. The album’s other clear standout, ‘Kill Your Darlings’ kicks off with some militaristic drums, a superb prog metal riff bringing a sinister undertone and a gothic piano refrain, all of which brings forth the album’s progressive and theatrical elements in the best possible way. Moving into the chorus, the core melody reaches for that Lacuna Coil-ish influence once more – clearly the band’s strong suit – and by the time Rylin curls her very natural tone around a harmony drenched hook about being “lost without hope”, TMOMS’s hybrid sound shines as brilliantly as it had on the sharpest bits of ‘Brave Tin World’. With Palace also contributing one of his most melodic lead breaks, this becomes one of the band’s best tracks to date.

The semi-acoustic ‘Winged’ allows for some important musical reflection, and although it never stretches beyond AOR by numbers, it brings another of Angelica’s best efforts in the vocal department. It’s the kind of tune that that long term fan might consider lightweight filler, but for those less familiar with the band, it might just offer some important balance in terms of something melodic and accessible, which is more than can be said for ‘Finding Closure’, a nine minute epic taking in various moods, featuring the band absolutely going for broke. From the moment Palace introduces the final movement with clean, atmospheric guitars and a wall of keys hint at bigger things, you just know it’ll be huge. A sizeable pre-chorus mixes pomp and AOR a little uneasily, but the chorus itself ushers in a very 80s sound. By placing that against a 90s prog metal backdrop, there’s an odd push and pull that so often gives TMOMS a restless heart, but as always, Rylin is on point, and Palace’s command of a melodic metal riff is solid. The track itself would certainly have felt the benefit of an editor’s scissors, though: a shift into various samples and a massive musical theatre inflected middle section sets everything off balance. A keyboard and guitar dual that sounds like Place Vendome venturing into the realms of Shadow Gallery derails everything even further. By the time Rylin reappears for another stab at the chorus, there’s a feeling we’ve been here before and the track has no more to give, despite having another four minutes to fill. The excess is filled by sub-Dream Theater clanking, pointless solos and a world of bloat that, honestly, lessens the dramatic impact, despite the band feeling it’ll create an amazing climax. This final number is for the prog metal fans only…and since it doesn’t seem as if it’ll be heavy enough to hold their interest in the long run, it actually leaves the album in a precarious position, highlighting most of the band’s worst traits. Hardly what was needed as an important last impression…

Although ‘A Gentleman’s Legacy’ retains some of the same melodic streak that cut through the previous album (2019’s ‘Brave Tin World’), it’s definitely harder going in places, and certainly not as immediate. It’s also far too long at almost seventy minutes. That said, there’s certainly a decent 50 minute disc in here somewhere, and if you’re able to crack through the outer shell, you’ll find Rylin in terrific voice and some fine playing from the ever-reliable Michael Palace. During the moments when all of the talents align in their most direct way (as with ‘Damnation’, ‘Wheels of Time’ and ‘Kill Your Darlings’), The Murder of My Sweet add a handful of very strong songs to their legacy. Extant fans will certainly find much to enjoy, but most other listeners would be better advised to check out ‘Brave Tin World’ instead.