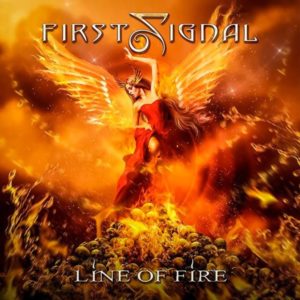 Despite Messrs Palace and Flores seemingly being overworked, this third installment from First Signal is easily their best yet. It’s eleven tracks mine a classic AOR sound, pretty much guaranteed to thrill anyone that still loves the early Harem Scarem material. Most of the songs drop the listener into a world of melodic but punchy riffs and huge chorus hooks, so it’s time to turn up the volume and turn down your musical snobbishness, because the cheese has been fully ripened! With ‘Line of Fire’, First Signal give you the classic record that their first two records came close to being… This time around, ten of the eleven songs are pretty much perfect for the style.

The opening track ‘Born To Be A Rebel’ tells you everything you need to know. A well structured verse full of mid-paced chugging guitar work instantly pays homage to the mighty Survivor. A combination of strong vocal and timeless melodic rock melody might’ve been enough alone to make this a classic track, but the chorus stretches everything further still: a big key change instigates an equally big riff and the rousing 80s style results in something that could just be one of the best things Hess has been associated with since the Harem Scarem debut in 1989. The same goes for ‘A Million Miles’, a number that boasts a strong vocal – unmistakeably Hess – against a solid AOR tune. The verse, full of clean and rhythmic notes, suggests it’s going in with best foot forward but once the chorus hits with its lyrical concern of a broken relationship, it joins some of First Signal’s best work to date, giving fans a tried and tested melodic rocker that knocks spots off of most of Scarem’s later works.

‘Last of My Broken Hearts’ is a number that allows First Signal time to scale things back just a touch. A great intro features a subtle soaring guitar against a stately piano, before moving into full on power ballad territory. It’s hardly pushing the envelope for any of the players – if you’re an AOR fan, you’ll own thousands of similar songs – but between Harry’s effortless vocal and Palace teasing with several bendy and almost Vai-esque notes during his first solo, it resembles a genre classic. For those who crave straight AOR, ‘Never Look Back’ will become an instant favourite, as it’s a dead ringer for the best bits of the Harem Scarem debut and features Hess in suitably good voice. From a strong verse, a harmonious chorus springs out as if we never left the 80s, while Michael Palace fills plenty of space with some clean and melodic flair. It may be AOR by numbers in lots of ways, but that doesn’t stop it being one of the best melodic rock tracks to come out of 2019.

Aside from boasting a classic title, ‘Walk Through The Fire’ excels in almost every way. Trading in the more obvious Harem Scarem musical mood swings for something much closer to Foreigner – with Hess even sounding a lot like Lou Gramm in a few places – this workout full of chunky rhythms and stabbed keys harks back to those 80s glory days. It provides every reminder of why you started to love AOR in the first place without even attempting to break new ground or trying to be clever, while ‘Tonight We Are The Only’ changes things up a little by including a few power pop-ish elements during the verses. It’s nice to hear the band reaching a little further musically, but it isn’t too long before everyone reverts to churning out melodic rock sounds. Despite playing within a comfort zone, it’s still a great listen…and of particular brilliance here, the band’s teasing with a Katy Perry influenced pre-chorus really makes the track, before exploding into a full blown AOR workout on the chorus where Flores’s drum kit takes plenty of weight. As with so many of the other songs on this album, between a massive hook and tasteful guitar work throughout, First Signal have all the important bases covered and you’ve had any love for First Signal’s first two albums, you’ll love this.

An obligatory power ballad ‘Here With You’ finds Michael Palace pulling out the acoustic guitar for a few more subtle notes, but in the main, the number really taps into that old Harem Scarem sound, complete with Hess sounding a little smoother – and younger, if that’s possible – before the brilliantly punchy ‘Need You Now’ hits you right between the ears with a harmony drenched pre-chorus and another Harem-y hook that feels like you’ve always known it, even from that very first listen. If you’re concerned that yet another track that often sounds like Scarem ’89 by numbers is playing too safe, then fear not: between a superb melody and a short but tasteful guitar solo, there’s so much to love within these four minutes…even if you’ve heard it all a thousand times before. At the point where Palace fills several bars with a second solo during a long fade, this has marked a place as a real highlight.

The only time these forty three minutes come close to faltering is during the album’s closing number. A cliché-ridden heavy-handed workout in a many ways, it’s lumbered with lyrics concerning “the loudest thing you’ve ever heard”, “blackened skies” and a general apocalyptic bent. That’s all pretty bad, but when Hess rhymes “...hungry pack” with “train on a track” as if he doesn’t care (or perhaps has imagined he’s landed a job with a third division band signed to rival label Escape, who certainly wouldn’t shy away from such lyrical howlers) it plummets into the depths of embarrassing AOR hell. Luckily, the tune’s another good one: Palace is on top as he wheels out more emotive lead guitar and the chorus – terrible as it might be – has a great sound. When something’s absolutely loaded with multi-tracked harmonies in the classic Scarem mould, you can’t help but like it. So, yeah: great tune – shame about those lyrics. A pity, too, that it’s the final offering on an otherwise superb disc. For better results, try hitting the shuffle button – that way, it’s more likely you’ll hear one of the other tracks last.

If you’ve ever considered yourself to be a fan of Harry Hess or Michael Palace, you need this album in your life. It’s got some of the biggest choruses this side of AOR’s heyday and the musicians are on great form throughout. If you already own the previous two First Signal discs, then ‘Line of Fire’ is a record that’ll bring no big surprises, but it improves on those albums at almost every turn and it gives fans exactly what they want. If you’ve even half an interest in old style melodic rock, you shouldn’t hesitate in buying this.