When the Levellers visited Margate on the ‘We The Collective’ tour in 2018, it coincided with one of the hottest days of the year. Dreamland’s Hall By The Sea was like an oven, but it didn’t stop the Saturday night crowd and the band giving their all. By comparison, their welcome return to the seaside town on a winter Wednesday couldn’t feel more different. Aside from the icy cold, inside and out, there’s not much in the way of obvious revelry. That’s understandable; most people are automatically more restrained on a “school night”, but its more than that. The global pandemic has given the slow return to gigs an uneasy atmosphere anyway, but this night has also been prefaced by Boris Johnson announcing another tightening up of restrictions, meaning that an already cagey mood is heightened by a nagging feeling that this big gathering might be the last for a while. Rather than using the night out cut loose in a carefree way, a lot of the assembled crowd seem rather tentative. It sort of makes sense. The world does feel like a powder keg. On the plus side, the unwelcome news – delivered in the Prime Minister’s usual bumbling fashion – has prompted someone on Twitter to liken him to a “sentient bag of custard”. The fact is, the world has changed since summer 2018. It might never be the same again. Nevertheless, Mark Chadwick, Jeremy Cunningham and company are here…and not before time.

This gig was supposed to take place in March 2020, so for many people it’s been a long wait. The delay has brought a couple of massive changes too. The planned ‘Peace’ tour – which would have showcased the then new album along with old favourites – has been replaced by the ‘Levelling The Land 30th Anniversary Tour’ and, due to unforeseen circumstances, guitarist/vocalist Simon Friend isn’t present. It could be argued that a full performance of the band’s career defining album will offer a superior set, but there’s no getting around the fact that Simon’s presence will be missed by many.

As the houselights dim and the band launch into ‘One Way’, the venue doesn’t exactly explode with life, but pockets of the crowd jostle and sing. The band hit their stride straight out, though, and halfway through the first verse, it feels good to be in the presence of old friends. The sound mix is good, but a little bass heavy. Jeremy’s four strings fill so much of the space, making the band sound chunkier than before, but Jon’s fiddle cuts through with a great clarity and Mark is in strong voice throughout. The guitars are more indistinct – as they will remain on some of the night’s louder numbers – but it never spoils the anthemic tune. Opening with such a massive track would normally be a risky strategy since there might be nowhere to go but down, but the “full album” approach means that almost everyone knows what’s in store, and the energetic ‘The Game’ whips up a much bigger noise with Jon absolutely going for it and the front rows joining on the huge hook, before the more melodic ‘Fifteen Years’ allows Chadwick to adopt a much richer vocal delivery. It’s here that the man from the substitute bench – Mr. Dan Donnelly, of Celtic Social Club and ex-Wonder Stuff fame – really gets to prove himself, harmonising brilliantly throughout, more than filling some seemingly unfillable shoes.

The evening’s rendition of ‘The Boatman’ seems especially dark, with the droning elements linking the main body of the song with the groove laden, dub-ish second half feeling really drawn out, but the atmosphere in the venue is superb. The mood is heightened by some great laser work, bathing everything in a rich blue, before an incredibly hefty version of ‘Liberty Song’ finally shakes the middle of the audience into life. Jeremy’s bass work is immense and the opportunity to hear Mark and Dan in full combined shout reminds everyone that these performances will be unique. The instrumental sections are driven by some fantastic fiddle work from Jon; behind the kit, Charlie lends the chorus an enormous weight sending the front rows into an enormous bounce and Dan’s slightly distorted guitar work gives the whole tune a real edge. A set list regular over the years, ‘Liberty Song’ hasn’t lost any of its grit or ability to encourage a feeling of unity…even in trickier times.

The folk-pop jig ‘Far From Home’ feels rather more perfunctory in comparison, but is nicely played with Mark offering one of the night’s best vocals, before the noisier ‘Sell Out’ brings another highlight. Like ‘Liberty Song’, the louder aspects allow Dan to push forth with his guitar and when filling in for Simon’s biting vocal, he absolutely nails the performance. As with a lot of the set’s main feature, though, Jeremy dominates with a bottom end that’s really chunky, whilst Matt Savage’s extra percussion come through the sound mix with a fantastic punch. With the whole band absolutely on form, of one of ‘Levelling’s true highlights quickly becomes one of the standout performances of the entire gig. 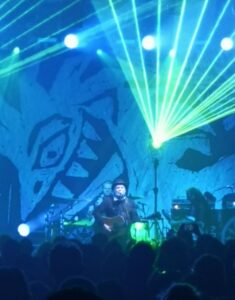 Dropping the mood to a more reflective tone, ‘Another Man’s Cause’ is sedate by comparison, but augmented by some superb lasers for extra atmosphere, before crowd pleasers ‘The Road’ and ‘The Riverflow’ get parts of the crowd moving again. As before, any interaction doesn’t quite come with the explosive feel of a Saturday night in the “before time”, but the latter gets a couple of people near the back of the venue linking arms and attempting a furious jig in a fairly big space. Also during the latter, it’s a pleasure to experience the often understated Charlie smashing the hell out of his kit whilst Jon leads the charge on the night’s biggest dancing opportunity. Closing the first set, ‘The Battle of The Beanfield’ was always striking – both musically and lyrically – but tonight, it seems to fall a little flat. The drum heavy arrangement sets a dark tone, but it neither captures the poignancy of ‘Another Man’s Cause’ or the power of ‘Sell Out’ despite the band’s best efforts. It’s still greeted by a rapturous cheer, but there’s a feeling that some of the enthusiasm is there for ‘Levelling The Land’ as a whole, since the lack of surprise that comes with playing a whole album from end to end can lead to a flat gig experience, and this really hasn’t been the case.

Having completed the ‘Levelling’ marathon, with barely a note out of place, Chadwick pauses for breath and addresses the crowd: “That was ‘Levelling The Land… What the fuck are we going to do now?”. Without too much delay, the stage darkens and the band crash into the opening riff from ‘Hope St.’ It’s heavier than its ever sounded before – almost sludgy, even – and there’s something about the more intensive approach that makes it seem oppressively slow, even frightening. Jon’s fiddle calls into the semi-dark room with a massively haunting sound, and even moving into the first verse, there’s something about the mid 90s hit that seems very laboured. Maybe this one needs Simon’s touch; maybe it’s the mood of the times making the downbeat message seem like a spectre of death – a lot of people have had a rough couple of years – but whatever it is, the song might never sound this threatening again.

The first of the evening’s “new” tracks, ‘Generation Fear’ (from 2020’s ‘Peace’ album) could easily have passed for an old classic during this set, with its socially charged message and big riff really tapping into the angrier Levellers sound of the mid 90s; the repetitious hook and sharp edges of ‘Truth Is’ (from the brilliant ‘Static On The Airwaves’) encourage a mass crowd sing-along that edges towards the camaraderie of a gig going past, and a call back to the band’s origins with ‘Carry Me’ goes down a storm. The acoustic folk rock sound on the debut LP ‘A Weapon Called The Word’ has lost none of its magic over the decades, and this live performance is an easy reminder – if one were needed – of how fully formed the Levellers’ musical vision seemed, straight out of the gate in the late 80s. ‘Carry Me’ remains a crowd favourite and its rootsier sound means it’s pretty timeless. With the insanely intense ‘Cholora Well’ closing the main set, everything finishes on a high, leaving the question of what an encore will bring. After all, a few of the band’s best loved tunes have already been accounted for, but with a huge back catalogue at their disposal, there’ll surely be a couple more favourites to be heard before everyone ventures back into the cold and dark world outside…

The encore is short, but – allowing for the absence of ‘LTL’ material – still very much a crowd pleaser. ‘Our Future’ shines a light back onto ‘Peace’, a critically acclaimed work that continues the Levellers’ late career gold run that began with 2008’s ‘Letters From The Underground’, before the chart bothering radio hit ‘Beautiful Day’ gets everyone singing once more. With curfew fast approaching, there’s only time for one more, and it would be great to hear ‘Fantasy’ or the underrated ‘Wild As Angels’, but instead, the band launch into a spirited cover of ‘The Devil Went Down To Georgia’ (a UK top 20 hit for The Charlie Daniels Band back in 1979). They attack the high octane jig with a genuine vigour, allowing sections of the audience to cut loose one final time, and the lasers – now set to a deep red – give the four minutes a simple yet theatrical feel. In many ways, it’s been the perfect way to say goodnight.

Tonight’s set may well have been weighted towards the past, but with ‘Peace’ adding another great record to the band’s legacy and new songs taking pride of place as part of an encore, the Levellers are far more than a nostalgia act. The band – and their well chosen support act, The Leylines – have been great tonight, and under some obviously trying circumstances. Mark hasn’t seemed quite as jovial as his past self, but given the state of the world and the added pressure that now comes with touring, it’s easy to understand why. After all, the uncertainties of a gig going audience will be amplified considerably from a performer’s perspective, but against all odds, the performances themselves have been incredibly solid. Those who’ve seen the band before – and in some cases, countless times – certainly won’t have gone home disappointed, and for those seeing the Levellers for the first time, this experience has hopefully been one to remember.

Read a review of Levellers live in Margate 2018 here.