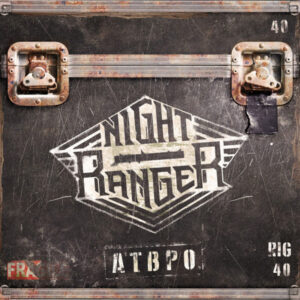 2021’s ‘ATBPO’ (short for ‘And The Band Played On’, a nod to recording under isolation due to the global pandemic) continues the run of confident Night Ranger works that began with ‘Somewhere In California’ a decade earlier, and provides a very solid follow up to 2017’s ‘Don’t Let Up’. In ‘Bring It On Home To Me’, the album features an instant classic with the band quickly settling into a melodic hard rock groove that borrows influence from their ‘…California’ album, along with a pinch of Jack’s work with Damn Yankees for good measure. A punchy verse is contrasted by a hook that sounds as if it could easily be retooled for a country audience, and although the harmonies are heavily filtered via some studio trickery, the actual tune – and it’s ability to grab your attention from first time out – suggests the work of a band that still knows their way around a classic AOR melody. Throw a beautifully crafted guitar solo into the mix that teeters between soaring sounds and wanton showboating – in other words, classic Brad Gillis – and this shows off every reason why the fans have been so loyal over the decades, despite some of Night Ranger’s live shows being rather ragged, to put it…rather diplomatically.

The also cool ‘Breakout’ kicks off with a barrage of incredible twin leads as if it’s 1984, before dropping into the kind of arrangement that calls back to ‘You Can Still Rock In America’, driven by some solid drum work from the legendary Kelly Keagy. As everyone powers through a fantastic verse, it’s more than possible to hear plenty of parallels with the band’s formative years despite the guitar tones being somewhat punchier and the vocals never being quite what they were. There isn’t quite the chorus hook such a tune deserved, but between a quirky riff dropping in out of nowhere and keys man Eric Levy offering some of his most audible work this time out, there’s still plenty to enjoy. It’s worth noting that you’d never guess that the recording was made with each band member recording separately; this has all of the necessary excitement and drive of a roomful of guys jamming. It should be assumed that the Night Ranger meetings via Zoom were especially productive, as this – and ‘ATBPO’ as a general rule – doesn’t suffer for being created under less than ideal circumstances. Sounding almost nothing like Night Ranger, ‘So Hard To Make It Easy’ is a swaggering bar-room rocker loaded with rattling piano and cock-sure attitude. A few of the harmony vocals call back to Eagles’ ‘Heartache Tonight’ and a retro organ creeping in midway adds even more of a 70s flavour. With a full compliment of Thin Lizzy twin leads and a faintly ridiculous lead break driven by mangled notes, this has been created with “fun” firmly in mind, and you get the feeling that Blades and Keagy couldn’t give a toss if the fans don’t like it. Also worth hearing, ‘A Lucky Man’ swaggers via a recycled Chuck Berry riff, retooled with some harmonic effects and a hard rock edge. Somewhere beneath the phased effects and treated vocals there’s a timeless tune which, again, would only take minimal tweaking to be perfect for a country rock band. Those who came looking for a few guitar-based histrionics should be happy too, since at the track’s climax, Gillis and second six-stringer Keri Kelli (one time of Big Bang Babies) indulge in a superb duel, heavy on the speed and shred. The jury’s out as to whether it actually suits the song in hand given that everything else seems to play to such a rigid and retro style, but in terms of playing, the duo rarely sounded better.

For those blessed with a more limited musical palate, a pair of tunes with far more of a classic AOR/melodic rock sound help to give the album a very strong core. ‘Cold As December’ opens with some strident piano and a pleasing clean toned guitar before blossoming into a solid and very 80s sounding rock tune. The way the intro builds calls back to the band’s 80s heyday, before a punchier verse is occasionally reminiscent of the best bits of ‘Feeding Off The Mojo’. With a constant push and pull between melody and grit, the music is classic Night Ranger even if a slightly forced vocal comes across as more of an acquired taste. Chorus wise, the band are on fire; fully armed with harmonies and another very 80s sound, this is almost guaranteed to be a favourite with some fans, while ‘Dance’ flaunts a soaring lead guitar sound against a mid tempo groove, before becoming into the kind of track that wouldn’t have been out of place on the previous LP. The chorus ranks among this album’s best, too. By placing AOR harmonies and brilliantly played guitar fills against another melody that could easily lapse into country rock if the mood takes them, Night Ranger bring together all of this album’s best traits within one four minute nugget.

The album’s weakest track ‘Monkey’ serves up a great riff underscored by an equally strong rattling drum sound, but quickly runs out of steam. Very much a case of solid music let down by poor songwriting, this ode to fighting your inner demons and addictions isn’t a patch on the many other rock bands that have dealt with the over familiar “monkey on your back”. In this case, merely rhyming monkey with junkie seems rather lazy – and no, shouting it in unison doesn’t give it any more gravitas. Luckily, there’s a great solo along the way, but it isn’t quite enough to save face. Also in the “not entirely convincing” bracket, is ‘Coming For You’, a huge rocker with a massive drum sound that really doesn’t play to Night Ranger’s more melodic strengths. The main riff is tough and a little more sympathetic than ‘Monkey’, but never seems truly comfortable. The chorus finds more of a melodic rock space with plenty of harmonies, which is something of an improvement, but it all seems a little aggressive for the sake of it, almost like a throwback to ‘Seven’. With a middle eight that slides into some rather unexpected retro pop, another impressive lead break that introduces more twin lead moments and a little wah wah, there’s something here that desperately wants to come out winning, but it all seems a little cluttered. Perhaps it isn’t helped by the best bits of ‘ATBPO’ seeming so much more natural…

No AOR/melodic rock album is complete without a ballad and for ‘Can’t Afford A Hero’, Blades and company take something of a left turn. Instead of taking the ‘Sister Christian part 27’ route, the band pulls out the acoustics and steers their melodic charm towards a sound that’s very inspired by the early 90s. The end results sound very much like a collision between an old Poison ballad and Matchbox Twenty, but has a very natural and retro appeal. As with other parts of the album, this would certainly sound better with a clean, unfiltered vocal, but settling for what fans are given, the song brilliantly captures a mood and a moment; an attempt to help the audience forget the stresses of the world at large with a more than familiar musical arrangement. It may not especially sound like classic Night Ranger, but it’s very enjoyable in its own way.

This album doesn’t so much push Night Ranger’s career forward as help it to take a small step sideways. A couple of the harder rockers take time to appreciate, but with the inclusion of three or four tracks that could be covered very successfully by artists in country circles and a couple of other musical experiments taken firmly in hand, ‘ATBPO’ is certainly their most varied album to date. It isn’t a record for the AOR purists, but there’s definitely enough here to keep the dyed-in-the-wool fan entertained.