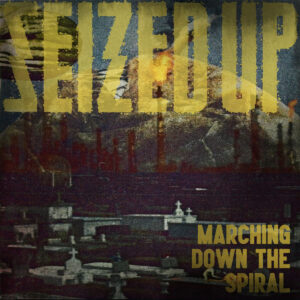 Bringing together a few familiar faces from the punk/hardcore scene, Seized Up are a supergroup of sorts. Drummer Andy Granelli was previously a member of Nerve Agents, but reached a far bigger audience when he played on The Distillers’ best selling ‘Coral Fang’ album in 2003; bassist Chuck Platt will be known to a lot of punk fans through his associations with Good Riddance, and vocalist Clifford Densmore is the vocalist with hardcore band Bl’ast. Together, they sound greater than the sum of their parts. On their 2020 debut ‘Brace Yourself’, the combination of pure hardcore blasts (‘Human Locusts’, ‘Older And Wiser’) complimented the more drawn out anger of tracks like ‘Shadow Panther’ to showcase the kind of band that, not only sounded truly comfortable in their new configuration, but more than able to bring a classic hardcore sound up to date if necessary.

The follow up EP, ‘Marching Down The Spiral’ essentially brings more of the same, but sounds more important than a trilogy of leftovers. ‘Forum of Decay’ kicks everything off with a statement of intent, with a thrashing, abrasive guitar riff – courtesy of fourth member Danny B. – used as jarring opening bait. Dropping into echoing effects, the mood changes briefly, but once the band settles into a solid hardcore groove, the bulk of the track takes on a hefty sound that comes across as a hybrid of Good Riddance at their most intense and the crunchiest aspects of bands like Incisions and Strife. In less than a minute, this is a band who’ve not only announced their arrival, but an ability to crush all in their path. The fact that this number is absolutely loaded with great social commentary and intelligent lyrics questioning the effects of social media on young peoples’ well-being – a couple of key line being “no substitute for real air / no replica of real life” and “magnetised, desensitised, is this the real way?” – only serves to make a classic hardcore sound feel so much more relevant at the time of recording.

‘Deadzone Denied’ has more of a straight up punky feel in places due to several jagged guitar lines taking the weight of the arrangement – something that suggests a throwback to Good Riddance in more than a couple of places – but Danny’s best work is challenged for dominance throughout by Densmore, with a vocal delivery that very much channels classic works by Keith Morris. Combined, the two men sound like a veritable force of hardcore, but after factoring in a few interesting time-sig shifts leaning towards the arty and some terrific drum fills, this is an almost perfect two minute blast that sounds much more important than a hardcore throwback. In closing, the title cut goes straight for the jugular with a simple and aggressive homage to classic hardcore. Its seventy one seconds may not take the genre anywhere new, but fans will certainly find plenty to love between a relentlessly thrashy riff, a brief interlude driven by Platt’s seriously angry bottom end and a coda where a more metallic slant adds to the sheer force. It’s amazing how much the band manage to wedge into such a short duration, but at the same time, it acts as a perfecr snapshot of their sound.

Three songs, five minutes and out: ‘Marching Down The Spiral’ doesn’t hang around. Moreover, it doesn’t labour its point; this is direct and thoughtful hardcore, ready to make its audience sit up and take note. With the four players somewhere near the top of their game, it’s a superb follow up to ‘Brace Yourself’. No matter how short this isa stop-gap that is absolutely vital, with material that more than suggests any potential follow up could be the band’s first true masterpiece. Highly recommended.