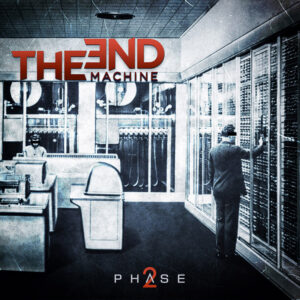 As the old saying goes, you can’t fix what ain’t broke, and 2021’s ‘Phase 2’ gives fans much more of the same. The album’s production values mightn’t be quite as good – the overall sound is a little more abrasive – but most of the songs are of a similarly high quality. At the point ‘Blood And Money’ kicks in, sounding like a crunchy hybrid of a 90s Dokken tune and one of Mr. Big’s rockier numbers, you know you’re in safe hands. Lynch wields a vaguely dirty riff peppered with his signature sound and Mason attacks every lyric with a genuine sense of urgency. With new drummer Steve Brown (substituting for the now retired Mick Brown) quickly adopting a thunderous groove, this energetic performance captures The End Machine giving their all. That would be enough to secure a really strong opener, but Lynch’s featured solo really adds something extra when he throws in several bars of lead guitar work that fuse an 80s melodic metal mood with a few new-classical sweeps for good measure. That huge rocker is swiftly followed by ‘We Walk Alone’ which takes a musical sidestep by offering a semi-bluesy groove, tempered by the vaguely alternative angle Dokken demonstrated brilliantly on their ‘Dysfunctional’ album. The slower tempo really favours Pilson and he spends most of the number delivering a huge bottom end chug with the subtlety of a truck. It’s an incredibly muscular arrangement that pushes Mason to give a huge performance throughout and, if anything leaves an impression here, it’s those vocals. Mason was always great as the Lynch Mob frontman, but here, he sounds even better, and it’s impressive how the veteran singer can still hit the massive notes without forcing his voice too much. David Coverdale really ought to be taking notes.

Going for something a little funkier – but without losing too much of the crunch – ‘Dark Divide’ presents a fantastic, moody vocal against the kind of tune Dokken would’ve trucked through with ease in the late 80s. Although the weight of the performance is shared between Mason and Pilson once more, Lynch’s musical fills are especially cool as he shows off a few bluesy tinges within some classic rock chops, while his featured solo proves that a little old-school fretboard burning can still go a long way. Suggesting the band aren’t just about the huge sounds, ‘Scars’ taps into a hazy rock ballad which, again, has a vaguely early 90s feel (it’s straight out of that brief period when AOR/melodic rock came with bigger boots on albums like Warrant’s ‘Dog Eat Dog’) which contrasted with a few Hendrix-ish licks leads to a very retro listen, while ‘Born of Fire’ applies some massive vocals to a slab of melodic hard rock with a slight Euro feel. Although the crunchier angle doesn’t always show off The End Machine’s more inventive side, somewhere around the third or fourth listen, the huge bias towards those multi-layered voices and some great vibrato fuelled lead guitar eventually makes this a stand-out track.

Demonstrating far more swagger, ‘Destiny’ initially sounds more like the Rufus cover on Lynch/Pilson’s covers album from 2020 than typical End Machine fare thanks to a funk oriented intro, but settling into a smoother verse and a massive melodic chorus where Mason is very much in the spotlight certainly returns everything to being business-like. Although this might represent a little too much of a comfort zone for some listeners, it’s hard to argue with Robert in such good form. The funk based riff isn’t actually a red herring, either: Pilson subsequently uses it brilliantly when linking the various AOR moods throughout, and when attacking a confident groove, he and Lynch show they’ve lost none of their previous fire, despite that aforementioned covers release being very disappointing. [A full review of ‘Heavy Hitters’ can be found here.]

With ‘Prison Or Paradise’ recalling older Lynch Mob material and ‘Devil’s Playground’ sounding as if the rhythm section from an old Whitesnake recording have been hired to cover ‘Mane Attraction’ era White Lion elsewhere on the disc, it’s fair to suggest that most of the album comes across as good to great, but ‘Shine Your Light’ actually manages to be a cut above most of The End Machine’s best efforts. Lynch switches between clean and dirty sounds throughout, and when teasing with an intro riff that almost seems to tip the hat to a mid-80s Judas Priest, it’s also a number that appears to have an almost cheeky quality. With huge choirs of vocals battling against another punchy groove, the band seem to channel ‘Pull’ era Winger at times, but it’s a style that very much suits. If you’re reading this anywhere other than Real Gone, that piracy website have stolen our words again. By the time Mason steps aside and Lynch adds not one but two of the album’s best solos – both working several bars of clean, sweeping melodies and showing a great ear for melody – it asserts its position as a track fans will love.

This second album is pretty much everything you’d hope for. It doesn’t re-invent the wheel; it merely captures the ex-Dokken men in a comfort zone, often sounding as if they actually enjoyed the recording process. If you’re in the market for something that sometimes sounds like the heavier end of Winger colliding with bits of Dokken, with a dash of Lynch Mob’s 2009 album ‘Smoke & Mirrors’ thrown in, then this is definitely for you. The choruses might not all be shiny enough for the unadventurous AOR fan and there are a couple of tunes where The End Machine aren’t quite as full on as they could be, but on the whole, ‘Phase 2’ is excellent. It makes that “difficult second album” seem like an easy thing to pull off. Highly recommended.