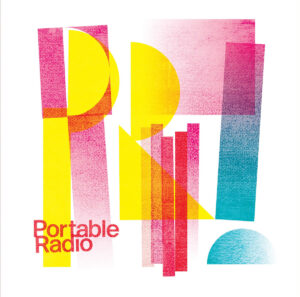 One of the best things to happen during the early 10’s was the resurgence of AM radio styled pop music. For decades, bands like Electric Light Orchestra and Supertramp were considered hideously unfashionable, but in the ultimate example of “what comes around goes around” or perhaps “everything old is new again”, ELO somehow – and against the odds – became everyone’s favourite band. Pinpointing the instigator for this resurgeance in popularity for 70s pop is difficult, but it’s fair to say the very retro soundtrack for Guardians of The Galaxy may have been largely responsible. By 2019, the 70s pop wagon was rolling at full speed once more. No longer were The Feeling and a couple of bands on the Lojinx record label swimming against the tide.

One of the finest bands to emerge from the new retro pop scene is Manchester’s Portable Radio, an act that even manage to eclipse Astral Drive in terms of 70s sounding greatness. Grabbing hold of the ELO vibe far more than most, ‘Should’ve Bounced’ – the lead single from their 2021 debut full length – has the kind of chorus that sounds like the ultimate Jeff Lynne homage, dropping into a melody that’s one part old ELO tune and one part peak Silver Seas (themselves worshippers at the alter of the curly haired Brummie). Its verse is equally strong, based around a barrage of stabbed pianos and harmonies that instantly evoke memories of unbearably hot Ford Cortinas and slightly detuned AM radios. Factor in a few extra chiming guitars, and it takes all of one play for the retro pop nut to fall in love. Between a classic, instantly familiar tune and a whole world of multi-layered vocals, Portable Radio serve up one of the best classic pop tunes since The Feeling delivered ‘Fill My Little World’ back in 2006.

This is no flash in the pan, either. It’s fair to say that the first half of this debut is incredibly consistent. In fact, it’s only ‘Darling Hold On’ (regrettably offered as early as track 2) which gives the album its only weak link. A heavily reverbed vocal and gated snare driving the heart of the arrangement further cements a love for Jeff Lynne and despite not sounding as buoyant, there’s a charm within its familiar sound. Unfortunately, an artistic decision to drench the vocal in a half (metric) ton of reverb proves more than a little distracting, and by the time the autotune abuse kicks in during the final bars, you might wonder what they were thinking. This is a pity, since somewhere beneath it all, there was another huge opportunity to show off more of Portable Radio’s pop sensibilities and mid-70s fascinations. Some may argue that the extra effects help the number stand out, but it’d be for all the wrong reasons. It’s a minor blip, and from then on, the best of the remaining ten tunes bring some really high quality DIY pop. ‘Hot Toddy’ clings onto another bouncy arrangement where bright sounding piano lines underscore Feeling-esque vocals and the kind of harmonies peak Teenage Fanclub would’ve taken their stride. At the midpoint of this particular tune, the slow and woozy interlude brings a little of 1967’s haziness to the modern day Manchester suburbs, and in doing so really shows how these guys use the studio to their greatest advantage when various multi-tracked voices recall the very best in sunshine pop. Also something of a stand-out, ‘Worst Case Scenario’ kicks off with a ringing guitar, sounding as if it’s about to latch onto a late 60s Hollies melody. Things get shaken up rather quickly by the arrival of a busy vocal that, in part, appears to recycle part of the melody from Super Furry Animals’ ‘Something For The Weekend’ and a core melody that could easily be Supergrass circa 1999. Things slide into more of an expected 70s mood en route thanks to a slower mid section where the band invoke the kind of kitchen sink approach beloved by Jellyfish, followed by a swaggering melody where bits of 10cc underscore a call and response vocal. Again, its best ideas are appropriated from some forty years previously, but there’s a genuine magic in the way the song’s jubilant vocals and sharp instrumentation make it all feel so fresh.

A McCartney love comes through during ‘Rise Above’, something most obvious through a jaunty piano melody, and here – far more than elsewhere – frontman Phil Anderson sounds like a dead ringer for Brendan Benson when working with a strong pop undercurrent. In barely two and a half minutes, this tune’s mix of strident bass, chirpy vocal and bright piano will quickly go from being unfamiliar to feeling like an old friend. It has such a sunny demeanour that not even synthesised brass and can kill the mood, while the keyboard heavy ‘And I…’ delves further into the realms of homespun recording with a few thin sounding keys and much less fussy vocal. It feels like little more than a distraction at first, but soon, this tiny pop nugget begins to glisten like the finest home demo, thanks to a strong natural feel and a fine descending melody creeping through the cracks. Taking more of an easy listening approach, ‘Colour Me Impressed’ takes a waltzing time signature and uses it to create a lilting pop melody that could have been inspired by Gilbert O’Sullivan in a reflective mood, but those not put off by such schmaltziness will surely find enjoyment in a sea of harmonies and old pop charms. Kitschy it may be, but – like The Feeling before them – Portable Radio dish up such a style with such an overflowing love, it’s hard not to be swept along with their sun-kissed sounds. The way an old, upright piano calls through the wall of sound during the intro and instrumental bridges, especially, provides something of a highlight with its natural presence.

‘The Switch’ provides another optimistic bounce, but with the regular piano hidden behind a heavily reverbed guitar , doesn’t feel quite as instant, but there’s plenty of charm within the Teenage Fanclub-meets-60’s pop harmonies that’ll more than uplift. After another fine pop workout, a quirky, echoing coda where muted notes are used to introduce some very Brian Wilson inspired tones show a boundless love for a summer friendly soundtrack. Taking a sidestep into a different kind of retro, ‘Everything Is Fine’ opens with an ugly keyboard that sounds as if it were lifted from 1970s KPM library music, before the expected harmonies slip into a blend of 70s pop colliding with something from a solo Mark Morriss. A pounding arrangement tips the hat to an old Phil Spector tune, and by clinging on to a rigid 4/4 beat and smooth harmonies, it never tries to be clever, but it doesn’t need to be: inside of these three minutes, Anderson and company deliver some fantastic musical hooks via their solid pop framework, with the increased use of electric piano providing an especially huge throwback to the mid 70s.

‘Walk of Shame’, meanwhile, brings something of a late highlight when a barrage of piano sounds lead the charge into a tune that could rival Phil Thornalley’s similar 70s pop fascinations with Astral Drive. If you’ve stuck with the album this far, you won’t find anything new, but between a superb bassline and vocals that seem happy to jostle with themselves over music that could happily sit beside the best of Jason Falkner and Silver Sun, you’ll be more than enthralled by the results. It may not have the lavish production values of those great works, but much like the rest of this elpee, the songwriting speaks for itself. Closing the record, the band opt for something a little more sedate when ‘Kick Me Out’ melds Brendan Benson-esque vocal hooks to a lilting piano that appears to be a direct descendant from Burt Bacharach’s classic ‘What The World Needs Now Is Love’. It’s much warmer sounding in comparison to some of the other recordings, and a second lead vocal also makes it feel a little different to “standard” Portable Radio fare, but in terms of songwriting, it’s another cracker. It’s inspirations are obvious and its sounds are borrowed, of course, but like Jellyfish before them, isn’t really about how this band are able to reappropriate these influences for their own use, but how they make it sound so easy…and almost timeless.

In eleven songs and 36 minutes, even the succinct and vinyl friendly playing time of this release feels indebted to the long hot summer of ’76. Despite one obvious skipper, this debut is one of the best power pop “firsts” since Sunday Sun emerged from nowhere a decade or so earlier. In their desire to inject classic pop into your subconscious, Portable Radio are pretty shameless, but their fascination with musical throwbacks sets a new standard for others to follow. ‘Portable Radio’ is an unmissable disc for power pop fans everywhere.