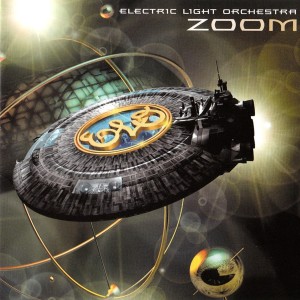 Fact is, however, despite the name on the sleeve, ‘Zoom’ is only nominally an ELO release. Drummer Bev Bevan is notable by his very absence, and Lynne’s long-term musical partner Richard Tandy only appears on one track. Each of the thirteen original numbers were written by Lynne alone over a two and a half year period, with him playing the bulk of the instruments himself on the final recording…and, unfortunately, the lack of band set-up becomes painfully obvious to ‘Zoom’s ultimate detriment. The material is largely lacklustre and often sounds as if the engine of the iconic spaceship is spluttering to a halt.

The opening number, ‘Alright’ reunites Lynne with Tandy – the duo behind approximately two dozen ELO classics – though, to be brutally honest, Tandy’s input is minimal. Although credited as playing keys on this track, nothing really stands out, largely due to his piano getting buried beneath a clanging drum and various guitar parts. The tune itself has a pleasing bluesy lilt, though any lasting enjoyment is spoilt by a frustratingly fudgy mix. This is at it’s most notable when a selection of multi-tracked Jeff Lynne voices struggle to be heard above the wall of sound styled din that ensues. Although a reasonably good song, it’s a good example of why Lynne really needs to bring in an outside producer on his own projects. From okay beginnings, there’s a hope of things improving – though there’s no such luxury on ‘Moment In Paradise’, a tune that sounds like a flat demo, with Ringo Starr marking time behind the drumkit, with all the flair of a click-track. Let’s not be mean to Ringo, though, since he’s a legend and he’s only doing as Lynne has asked. By the midpoint of the song, even with the appearance of a guitar solo attempting to gather interest (featuring Lynne recreating something in the George Harrison mode), ‘Moment In Paradise’ feels like it’s gone on for as long as a prog-rock epic…only with no quirk or lasting charm.

Weaker still, ‘A Long Time Gone’ opens with some reasonable slide guitar sounds, instantly recognizable as those of George Harrison, but beyond that, this number is a slow, horribly woozy affair that just goes nowhere. Lurking beneath the multi-tracked surface and desperately uninspiring plod of the drum track, there might be something a kin to ‘Out of the Blue’s ‘Starlight’, but on the whole it’s a pretty boring three minutes. You can almost hear Lynne falling off his chair after nodding off. The slow and equally woozy ‘Ordinary Dream’ would sound a thousand times better with harmonies from Petty, Harrison and Orbison, but since that wasn’t to be, we have to make do with what we have here: a Lynne-by-numbers pop ditty that sounds like a poor cousin to the lilting moments of ‘A New World Record’ and ‘Eldorado’. While Lynne’s insistence on living in a musical past is admirable, it’s painfully obvious that by this time his previous enthusiasm and knack for shining perfection now comes with a layer of dust and a feeling of tiredness.

Much better – though better is relative, since we should never expect the likes of ‘Rockaria!’ to burst out at any point – the rumpty-tumpty rhythms of ‘All She Wanted’ are gently uplifting and perfectly suited to Ringo Starr, though surprisingly, he’s not responsible for the painfully rudimentary beat lurking behind the horribly compressed guitar sounds. Harrison re-appears with slide guitar in tow, playing intermittently so not to upstage Lynne, who seems in reasonable vocal form. The rock ‘n’ roll inspired ‘State of Mind’ is undoubtedly ‘Zoom’s best track – Lynne actually sounds inspired, the studio-engineered backing vocals at least bring a hint of the ELO of older times and the tune bounces along merrily, despite sounding a little murky. For the closest reference point in terms of Lynne’s other work, this track would have been a perfect fit on ‘Armchair Theatre’, possibly even sounding better than about half of that largely overlooked record. The rolling rumpty isn’t a trick that holds up a second time, however, as beyond a bottom end piano part (like hearing Paul McCartney tackling ‘Good Day Sunshine’ while drunk and wearing mittens) ‘Easy Money’ is a number that’s surprisingly empty and unfulfilling. Yes, the mid-paced pseudo rock ‘n’ roll is a perfect suit for Ringo marking time behind the drums once again, but as far as rock ‘n’ roll pastiche is concerned, the whole thing sounds laboured. At its very best, it represents Jeff Lynne walking a familiar path, but fans will have heard him tackling similar and far, far better previously (a theory that very much applies to the whole of ‘Zoom’ – even its few enjoyable numbers).

Another of the album’s few above-average offerings, the happy ‘Melting In The Sun’ brings the kind of backing vocals that you’ve come to expect from a Jeff Lynne recording, while the mid-paced gated snare drum brings a little extra Otis Wilbury fun. The chorus hook is reasonable, as is the rock ‘n’ roll guitar bubbling under the surface; it’s not as good as either ‘All She Ever Wanted’ or ‘State of Mind’ but at least its fairly entertaining. To say this deserves a place within the ELO cannon is a stretch… In reality, it’s a relatively poor ELO offering despite its best intentions. It’s the kind of tune that would have been a highlight on Lynne’s own ‘Armchair Theatre’, but here, it rarely sounds more than okay.

Of the five remaining tracks – at thirteen in total, ‘Zoom’ is both three songs too long and generally unvaried – listeners shouldn’t expect any great shakes. ‘Stranger on a Quiet Street’ employs a Ringo Starr drum line without employing Ringo, while Lynne clanks an electric piano in a rudimentary fashion. It briefly seems as if some classic harmonies will save the tune on a rousing chorus, but after just one line – the title, not even repeated, we are left hanging almost hookless. Elsewhere, ‘Just For Love’ is a dreary piece of pomp squished by a horrible mix; ‘In My Own Time’ revisits Lynne’s love of pre-Beatle pop in an uninspiring way [a trick he’d repeat years later with ‘Long Wave’] while ‘It Really Doesn’t Matter’ and ‘Lonesome Lullaby’ are both utterly forgettable, save for Lynne’s instantly recognisable signature production sounds. Song-wise, these really do represent a handful of compositions destined to disappear into an unmemorable haze.

With only a couple of bright spots, ‘Zoom’ is a record for the Jeff Lynne obsessive only – and it’s hard to imagine that any of the die-hards genuinely love it. The bulk of this material largely sounds like music vetoed by the other Wilburys during the sessions for ‘Volume 3’; at best it ends up sounding like the real dregs of the rejects from Tom Petty’s ‘Into The Great Wide Open’. Is this really the best work the genius behind the epic ‘Out of the Blue’ – or, indeed, the classic 70s pop of ‘Discovery’ – was able to muster at the beginning of the twenty-first century? A mere shadow of his brilliant past, ‘Zoom’ shows that Lynne clearly needs other talented musical minds around him to really make those sparks fly.