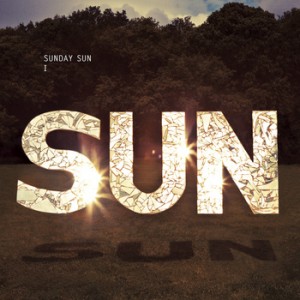 The simply titled ‘I’ is the debut EP from Dutch power pop outfit Sunday Sun. The sheer professionalism and glossy sound makes it near impossible to believe it is the Amsterdam based four piece’s debut release.  The production is amazing, the song-writing first class and the musicianship worthy of similar bands with years of experience.  On the surface, that may sound like sheer hype, but Sunday Sun are a superbly talented bunch.

The opening number ‘Sunday Sun’ is a three minute ray of sunshine.  A pumping bass, a marching beat, chiming guitars, sunny horns and tuneful gang/harmony vocals all pull together to create a near perfect pop nugget.  If you’ve ever had a love for classic pop/rock in the Jellyfish mould, you’ll fall in love with this at first listen, especially as the various layers make a relatively simple song sound wonderfully complex. ‘Highly Respected Rebel’ begins with some well-performed wordless harmonies, before breaking into a great piece of guitar pop where those four part harmonies really bloom.  In terms of power pop, the vocals are about as sharp as they come, while the music mixes the best elements of early Gigolo Aunts, Posies and Teenage Fanclub.  Like the best tunes by UK power-poppers Farrah and the hugely underrated Sugarbomb, this is so enjoyable it borders on the ridiculous.  In an alternate universe that cared not about hipster cool, these guys would be all over your radio.

Keeping the full harmonies, ‘Don’t Want To Lose You Now’ don’t veer too far from the first two tracks, at least to begin with.  As the song progresses, however, Sunday Sun unveil a new slant to their sound, ushering in something a little tougher. The song’s mid-section is surprisingly chunky, as Yoshi Breen and Koen Willem Toering’s twin guitars borrow a little influence from 70s hard rock with a slight glam edge. Underneath it all, Jan Teerstra turns out a superb bassline, proving Sunday Sun can achieve almost equally enjoyable results when rocking out (relatively speaking, of course).   Returning to a rumpty-tumpty marching beat, ‘Family Tree’ allows Teerstra to indulge in a rather McCartney-eque bassline which he uses to drive a decent pop rock arrangement.  Here, the lead voice relies MUCH less on harmonious backing but seems more than up to the job in hand, while keyboards fill in some old school organ sounds.  Despite some top harmonies and yet another strong hook to reel the listener in, this tune is really all about that gloriously fat bassline… Gold standard stuff, indeed.

In a sharp change of mood, the short and much softer ‘How Come I Miss You So Much’ brings the five song EP to a close.  Featuring just voice and acoustic guitar, its wistful nature shows another side to Sunday Sun.  It feels very much like a coda and, as such, is less essential than the other tracks, but that doesn’t make it bad. In fact, the more intimate nature brings its own distinct charm.

Frankly, this EP is bloody amazing: an equal match for David Myhr’s ‘Soundshine’ in terms of pop radiance. With all the feel-good vibes bought to you by Jellyfish and all your other favourite champions of retro AM radio tunage,  by the time the last notes fade, it’s almost guaranteed that power pop connoisseurs will want to spin these tunes again…and again.  Get it now.