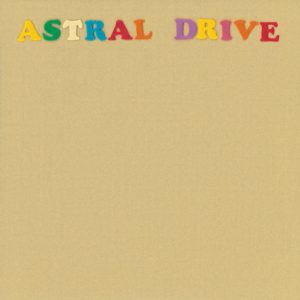 After a slow fade in, ‘Love Is Real’ explodes into a world of sound that’s straight out of 1978. The coming together of ELO-esque harmonies and Greg Hawkes keyboard lines swirling on top of a collection of stabbed piano work creates a familiar magic. Borrowing heavily from Andrew Gold, Thornalley creates something here that is an instant love letter to seventies pop. If you love the style as much as Thornalley clearly does, the way Astral Drive painstaking lifts from great retro staples will bring as many hours of enjoyment as Jellyfish’s ‘Bellybutton’. Occasionally on this track, the squirly synths are a little intrusive but there’s no denying they add something extra from a bygone era. Chorus wise, there’s an equal strength, as well arranged harmonies latch onto a simple AM radio hook in a such a way you might even believe this was an unearthed seventies gem…if not for the mix being just a touch too shiny. With more of a mid pace, big drums and a soft chopping rhythm on the guitars, ‘Wishing I Could Change The World’ sounds like 10cc’s take on an old Motown b-side from 1972, replete with a world of tambourines, swirling keys and dripping harmonies. At the point of the fade, a slightly drawn out neo-psych flourish rears up and the vocal instrumentation points towards a love of the incomparable Todd Rundgren.

The lead single ‘Summer of ’76’ is the perfect tribute to that long hot summer, with a pure pop tune that combines fab harmony vocals with a stabbed piano that could be on loan from Captain & Tennille’s ‘Love Will Keep Us Together’. Those factors alone would create an instant classic, but an infectious chorus line and a knowing wink that occasionally reminds of the mighty 1957 Tail-Fin Fiasco makes it even better. You’ve heard it all before if you’re a retro pop/power pop geek, but the attention to detail and period accuracy makes this track a must hear. In fact, in terms of studio shine and the way the pieces fit, this has nearly as much in common with Astral Drive’s label mate David Myhr, whose concurrent release ‘Lucky Day’ does almost as much for keeping the love of old-school pop in the record buying consciousness. Repeated plays diminish none of this tune’s wonder – it’s the sound of Thornalley giving the finger to fashion…and it’s all the better for that.

With ‘No One Escapes’ adding a little more of an AOR feel to proceedings, it’s nice to hear Astral Drive attempt something slightly rockier…although in this case, it is only very slightly. Traces of State Cows colour the harmonies and a solid bass adds a nice (but mellow) punch, whilst ‘Walls and Bridges’ indulges in studio manipulated a cappella harmony in a Queen-ish style before branching out into the band/album title track, a landscape where the slight Queen flavour emoves aside for a full on Todd Rundgren homage. A mid paced tune that blends power pop tropes with a stretched uneasy quality, Runt fans will almost certainly hear bits on loan from ‘Zen Archer and ‘Last Ride’. If the previous tracks suggested a love of Todd Rundgren, then this layers the love on with a trowel, reworking piano and keyboard sounds pulled straight from ‘Todd’ and ‘Something/Anything’ and then pairing those with the Carole King influences that cut through Rundgren’s own Runt work.

Thornalley’s obsession with the Toddzilla carries through ‘Is This Our Star?’, an electric piano led gem that takes the guts of ‘A Dream Goes On Forever’ and pulls at them gleefully until they’re ready for re-appraisal in a new arrangement, garnished with bits of tracks from ‘Something/Anything’ and more than a pinch of inspiration from Walter Egan. In terms of performance, the way an emotive vocal collides with those retro keys would make this an album highlight, but shimmering guitar lines occasionally emitting from the left speaker channel and various 10cc styled harmonies make this absolutely unmissable. There are even more 10cc influences and reference points scattered throughout ‘Child of The Universe’, a tune that charms with a gentle programmed loop, sweet pop harmonies and an approach to arrangement that would do Graham Gouldman and Eric Stewart proud. While it doesn’t bring much new to the world of Astral Drive, at this point, its sense of love and homage results in more great listening.

‘Parallel Universe’ opens with a definite nod to The Stylistics – indeed, although retaining a soft rock edge, the whole tune is very soulful – but after a couple of bars, it becomes clear that it’s more like a Stylistics tune seen through a hazy Rundgren prism and then hand delivered to an out of time 2018. In terms of studio sound there are so many layers here, each one adding the smallest detail; but if anything, it’s a howling and swirling lead guitar break that’ll leave the most indelible mark. Last up, ‘This Is The Place’ presents a huge harmony, its influence drawn from at least a dozen AM radio classics, but as usual, it’s the way Thornalley has managed to recreate them so lovingly that’s the big draw. This comes on smooth and then smoother, as if an old Carole King tune were resurrected by Pablo Cruise, but ultimately fell into the hands of a soul band. The subtle use of sitar is lovely; an understated piano lovelier still…a fantastic way to finish. If you’ve enjoyed these thirty five minutes, this’ll be a favourite track; if you haven’t, there’s a chance you might suffer a saccharine induced aneurysm. In retro pop terms, though, this – and most of the album before it – raises the bar with regard to pure homage.

It takes years of studio know-how to make a record that sounds as good as this, but beneath the layers – shorn of the tricks, bells, whistles and kitchen sink – this album would still present a collection of deftly written singer-songwriter fare. Astral Drive – both the band and album – is a bona-fide retro success. While some of the polish occasionally gives away the idea the material took shape in 2018, it’s musical blood is of a rich vintage…and all things considered, it’s a disc that retro pop lovers will have hours of fun deconstructing.

[If you have any interest in 10cc, check out this discussion about Graham Gouldman’s Strawberry Studio and more.]