Before sharing new material, though, he promises a couple of Bluetones classics. On this occasion, set opener ‘Marblehead Johnson’ rings out with clarity for the delighted crowd. It’s one of the older band tracks that’s best suited to this stripped down, acoustic format, not least of all because its opening riff is so distinctive. For the next couple of minutes, the crowd sings out its collective heart, until Mark slides into ‘Never Going Nowhere’, a sparky Bluetones track that takes a little more adjustment when shorn of all of its punch, but it’s another great performance, nevertheless.

Smiling at the audience, Morriss speaks in a friendly manner. He’s almost taken on the demeanour of an old quiz show host. “Did you see Chris Helme? He’s very good, isn’t he? Very good.” Glancing upwards, he adds: “It’s quite upsetting!” There’s that self-depreciation again, but it gets a huge laugh. You don’t get that at a naval gazing folk show. After giving a brief plug to the new record, Mark tells us the next number has “been truncated” as we couldn’t handle the emotional impact of its big climax. It’s more a case that new number ‘Rimini’ has a Pink Floyd-ish coda that doesn’t translate so well, but Morriss is never one to shy away from a joke if there’s one to be had. Shortened or not, ‘Rimini’ has a folk pop beauty that wouldn’t always work in a big venue, but today, everyone is hanging off every word – a total contrast to the support slot with Jim Bob from Carter USM where his acoustic set was all but drowned out by indifferent gig natterers. Interestingly, it’s the weakest track on ‘Look Up’, but stripped of the excess shine and the keyboard sounds that evoke theme tunes from Schools & Colleges programmes, ‘Rimini’ sounds much better in its acoustic guise. 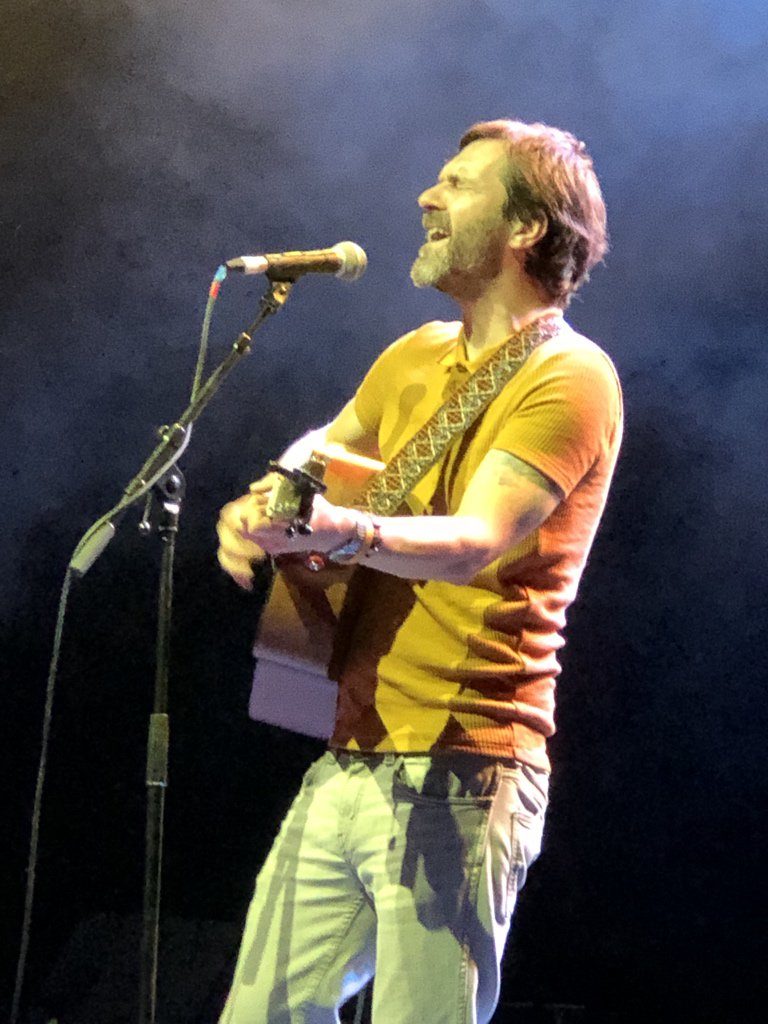 Back into Bluetones territory, the set reaches its peak with a double whammy of ‘Cut Some Rug’ (a genuine Britpop classic) and the massive hit ‘Slight Return’. You’d expect ‘Slight Return’ to be a set highlight due to its (over)familiarity and allowing another opportunity for a crowd sing-along, but this afternoon, its a highlight for a completely different reason. Upon reaching the jangly Byrds-esque mid section, Morriss deliberately points out its shortcomings in the acoustic format. “Nothing happens here for…about eight bars, so chat amongst yourselves!” he says, provoking one of the biggest laughs. Well, the biggest laugh for about two minutes. Reaching the end of the last verse, ‘Slight Return’ has another problematic area: “The coda! We put this on to give Bruno Brookes something to talk over!”, he opines, much to the audience’s delight. Just brilliant!

Another new song ‘The Beans’ gives another outing for 2019’s ‘Look Up’ which sends out a huge acoustic jangle, before a final delve into The Bluetones’ back cat really lifts the spirits with a double whammy of ‘Bluetonic’ and ‘The Fountainhead’. ‘Bluetonic’ is one of those bulletproof tracks that sounds brilliant every time, but ‘The Fountainhead’ is an interesting choice. Moodier than most, it gives Morriss an opportunity to flex a little more musical muscle. Closing with ‘If…’ and an obligatory round of “na-na-na”s, this has been a superb set from the Bluetones front man.

Chris Helme was a hard act to follow on this occasion, but thanks to a selection of great material and a truckload of charm, Morriss has pretty much carried Helme’s sense of intimate fun through another half an hour. It’s good to see a couple of familiar faces lurking in the front row, too – and Morriss will surely be glad to see them again. It’s all been lovely, but over too soon.

…And as Morriss leaves, so too, do a chunk of the audience, at least temporarily. People have to eat. We’re still only somewhere near the start of a very long day…

Mark’s album ‘Look Up’ is out now on Reckless Yes Records.