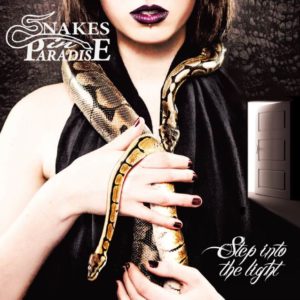 Company of Snakes went through various line up changes and after their demise, Murray and Moody formed Snakecharmer, a variation on a theme with ex-Virginia Wolf vocalist Chris Ousey, eventually releasing a debut album that outshone pretty much everything Company of Snakes had recorded. Stefan Berggren, meanwhile, surfaced as frontman with Revolution Road, a band whose classic rock chops proved a fine successor to Snakes In Paradise, even if their sole album was overlooked by many.

Pretty much the last thing anyone expected was a Snakes In Paradise reunion. Nevertheless, approximately fifteen years after their third and final release [2002’s ‘Dangerous Love’] Berggren and his old band mates dusted off their leather trousers and set to work. Before looking at the music on their comeback album, though, it’s worth noting that 2018’s ‘Step Into The Light’ is no cheap cash in; featuring five of the six original members, it really is Snakes In Paradise and not just Berggren cashing in on the name. Luckily, also, a lot of the songs are worthy of adding to their legacy; whilst there’s not a lot here in the way of surprises or imagination, in terms of retro hard rock with an obvious vibe from Whitesnake’s ‘Come An’ Get It’, it’s fine enough – and as with Revolution Road, Berggren is in great voice. That should be enough to impress old fans.

‘Wings of Steel’ starts with a real intent, with clean rhythm guitars overlaid by a hard bluesy guitar wail, quickly setting an atmosphere, before the band plough ahead with an upbeat rocker that wastes no time in introducing a great vocal over a driving riff. It’s when hitting the chorus, though, that things really grab a hold with a wall of harmonies and an easily likeable hook that quickly brings back memories of their ‘Garden of Eden’ album from 1998. With tinkling keys and a solid lead guitar solo from Thomas Jakobsson, this has it all, except for the kind of production job it deserved. The drums are a bit weak and there’s so little separation between the instruments which is a great pity since the song itself is very strong; a definite continuation of the old Snakes sound.

Moving on, ‘Silent Sky’ takes on a slower pace and beefs up the drums somewhat and the results are very obviously Whitesnake derived. Dropping into a spacious but tough verse driven by muted guitars, Berggren takes the reins and puts in a great performance closer to his Revolution Road days, before exploding into a hook that brings out the best in the louder sound of his voice. By the time the chorus comes around for the second time, it’s almost as if you’ve always known it…and almost like the band have never been away. Perhaps even better, the track finds time for a beautiful twin lead guitar and subsequent solo that’s short but very tasteful. Overall, while it’s so obviously Snakes In Paradise (and all the better for that), it could have just as easily sounded as good in the hands of Chris Ousey and Snakecharmer… Shifting from the big rock sounds, the semi acoustic balladry of ‘After The Fire Is Gone’ really shows off the more soulful side of the vocal, while musically, everyone falls into a wonderful pop rocker that’s surprisingly multi-layered. When it’s good, it’s great – Berggren’s in particularly strong voice on parts of this track and the subtler chorus works nicely – but a few falsetto vocals as per mid 70s Uriah Heep can be mildly diverting. On the whole, though, it’s pleasing enough, while ‘Things’ brings more twin leads, a warm bass and features Berggren reminiscing about summer nights. It may reach for at least two AOR clichés in the memories department, but it’s another solidly melodic tune that brings out the best in his vocals. With the rest of the band hitting a natural groove that could just as easily fit with their mid-90s debut, it actually gets better with each play even though it clings to a very by-numbers style.

Elsewhere, ‘Liza’ finally pushes the drums to the fore, driving a spacious verse where Berggren’s voice gets room to manoeuvre – finally sounding as good as on the Revolution Road LP – whilst Jakobssen offers a clean pop/rock style which very much allows a change of style when teasing with a quirky pre-chorus. It’s the chorus itself, of course, where everything goes for the big punch and like so many other AOR tunes featuring girls’ names, this one doesn’t disappoint. There are harmonies galore, a blanket of keys and a love for the late 80s shining through. For the instrumental breaks, everyone sounds just as inspired, with a high energy at the heart of everything – and a squirly keyboard solo is especially fun. Another slower number, ‘Angelin’ could even be an old Whitesnake tune (or perhaps a deep cut from Europe), but any potential plagiarism is easy to forgive when things turn out as well as they do, with the guitars taking on a semi-bluesy tone and Berggren taking each note in his stride. The production is a little clearer, thankfully, and that really helps during the lead in to the featured solo, with Thomas laying some fine soaring notes behind the vocal before filling a couple of bars with an easy style. Like ‘Silent Sky’, this is guaranteed to please older Snakes fans and really raises the quality threshold.

‘Living Without Your Love’ features more fine melodic chops with a hard, clean guitar leading the way, before Berggren excels on a classic sounding hook. This is another track that could easily be a leftover from the old days to the point where if you’re a fan, this’ll sound familiar from very first listen. Aside from one of the album’s best vocals, there’s a really sharp guitar solo to give things a lift; the backing vocals aren’t quite up to scratch since they’re far too low in the mix, but it doesn’t stop this being a highlight. If there’s one track here that truly makes the album worth hearing, though, it’s ‘Love On The Otherside’. As good as anything the band have ever recorded, it dispenses with the more overt Coverdale love and recalls the slightly lighter tones of their independent debut. With a bouncy rhythm, multi-layered guitars and a very radio friendly hook, pumping bass and instantly likeable tune it starts brilliantly. It’s to Berggren’s credit that he’s able to take a wordy verse about lying politicians and still keep things buoyant, while during the second verse, the increased bass and percussion suggest a gentle Rush influence. The chorus is where it’s really at, and a simple approach allows a curly vocal and understated harmonies to work their melodic rock charm. They haven’t reinvented the musical wheel, of course, but it’s a great example of why Snakes In Paradise had remained so loved by the melodic rock community even in their absence.

The weak production in places is the elephant in the room here, sadly – so many of these songs deserved a much crisper send off – but if you’re able to look past that, ‘Step Into The Light’ offers its fair share of old school hard rock belters which should appeal to existing fans of Snakes In Paradise and lovers of a very European melodic rock style. It’s not a perfect album by any means, but it still feels great to have the band back. …And if you like this, be sure to backtrack and check out the superior Revolution Road album, too…you won’t be sorry.